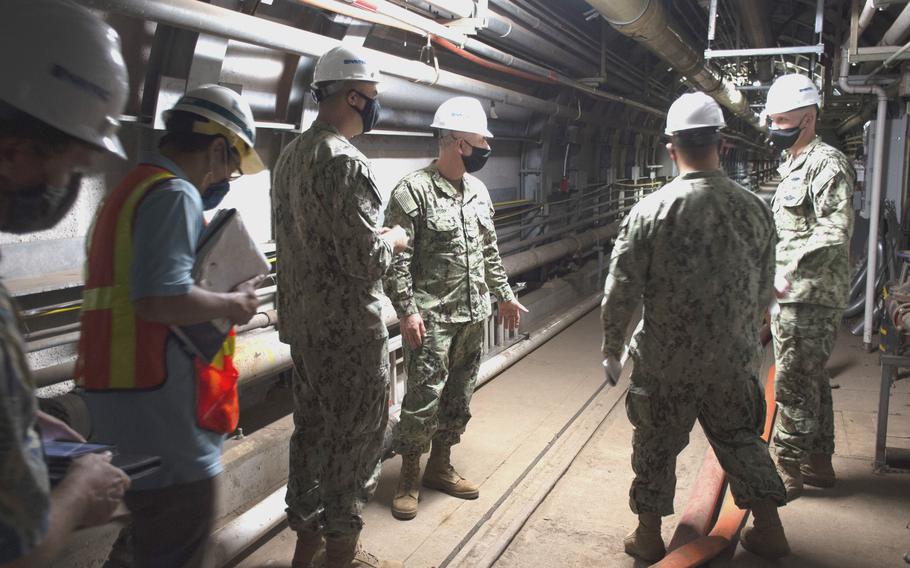 The recommendation upholds an emergency order issued by the Hawaii Department of Health on Dec. 6 requiring the Navy to empty roughly 150 million gallons of fuel in the tanks that are the source of petroleum contamination that has sickened hundreds in the past month.

Residents of two dozen military housing communities on or near Joint Base Pearl Harbor-Hickam began complaining of foul-smelling water over the Thanksgiving weekend.

Many have experienced a host of illnesses and symptoms, from vomiting and diarrhea to skin rashes, sore throats and burning eyes.

More than 3,000 residents have temporarily relocated to hotels.

The Navy isolated the well that was the source of the petroleum contamination and is now in the process of flushing the entire water system.

Hearing officer David Day presided over a marathon evidentiary hearing last week, during which the Navy argued against emptying the tanks and ceasing its use of the facility.

“We are aware of the proposed decision and have no further statement at this time,” Rear Adm. Charlie Brown, a Navy spokesman, said in a statement emailed Tuesday to Stars and Stripes.

Day’s scathing 33-page recommendation described the continued use of the fuel tanks as a “peril” to the island’s inhabitants.

“The Red Hill Facility has already damaged human health and the environment and, as currently situated, inevitably threatens to do so into the future,” wrote Day, noting that the “weight of the evidence establishes” that the facility is “a metaphorical ticking timebomb located 100 feet above the most important aquifer on Hawaii’s most populous island.”

“The threat of future releases poses an imminent peril to human health and safety or the environment at large,” he said.

The immensity of the storage facility, built during World War II, is remarkable.

It consists of 20 tanks, each about 250 feet tall, 100 feet wide and capable of holding just over 12 million gallons of jet or marine fuel. They are buried under Red Hill, which is about 2.5 miles northeast of Pearl Harbor.

The fuel, used by all the military branches and the Coast Guard, is carried to and from Joint Base Pearl Harbor-Hickam with a system of 7 miles of tunnels and 29 miles of pipeline.

The facility sits above the Southern Oahu Basal Aquifer, which provides 77% of Oahu’s water supply.

“There have been numerous reported releases from the Red Hill Facility over the past 80 years or so: at least 76 incidents involving nearly 200,000 gallons of fuel,” Day wrote. “More likely than not, these figures understate the true number of releases, or the total volume of fuel actually released.”

About 27,000 gallons of fuel spilled out in January 2014, and opposition to the facilities’ continued use has only grown since then.

Navy officials have linked the current contamination to leaks this year in May and early November but are still investigating the origins.

Day’s recommendation asserts that the Navy’s failure to understand the scope and scale of such leaks in real time is “damning.”

“The Navy is not reliable with respect to monitoring whether leaks are occurring, determining how much fuel is released into the environment when leaks occur, and ascertaining threats,” Day wrote.

“The fact that the Navy theorizes that the May 2021 Release and the November 2021 Release are connected evidences a lack of understanding of, and control over, the Red Hill Facility,” he wrote.

“The Navy obviously does not want the Red Hill Facility to release fuel, and the Navy is trying to prevent releases,” he wrote. “But despite everything the Navy is attempting to do, it is not enough: the evidence shows that the Red Hill Facility is simply too old, too poorly designed, too difficult to maintain, too difficult to inspect, along with being too large to realistically prevent future releases. It is not just one problem but a combination of many.”

The probability of a future release of fuel is “basically inevitable,” Day wrote.