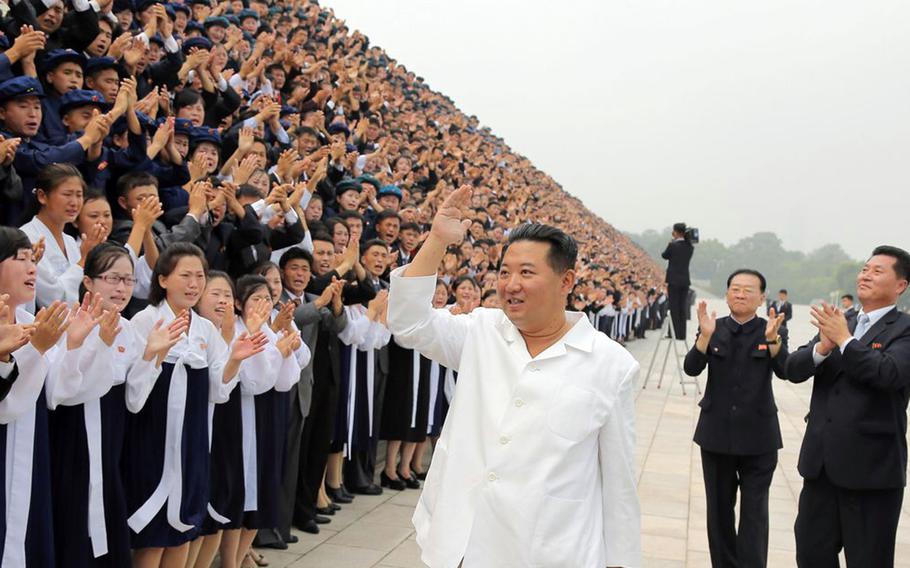 SEOUL — North Korea’s self-imposed border lockdown during the pandemic has exacerbated a shortage of food, supplies and cash, hurting the country’s most vulnerable people as they hunker down for the winter ahead.

Winter is typically a volatile time in North Korea, which struggles with chronic food shortages. What makes this year especially concerning, say analysts who follow North Korea, is the country’s closure of its borders since early 2020, even with critical trading partner China.

At the same time, the North’s leader, Kim Jong Un, has imposed new measures that have further restricted internal economic activity even as his government has kept up military advancement and test launches of missiles.

It is impossible to know the full scope of issues affecting North Korea, a totalitarian state that issues carefully controlled and choreographed propaganda.

But according to statements in state media, limited trade data and accounts of informants and defectors, which cannot be independently confirmed, the pandemic lockdown has devastated the domestic economy and access to food.

Kim has emphasized self-reliance during the prolonged food crisis as the country retreats further inward. That posture also creates challenges for those seeking to reengage North Korea in denuclearization talks that have stalled for nearly three years.

There are signs that North Korea may be looking to reopen its border with China. But the prospects for bringing Kim back to negotiations remain slim, especially as the Biden administration has shown no signs that it is willing to grant the sanctions relief that Kim demands.

Urging North Korea to reopen its economy gradually, U.N. Special Rapporteur Tomás Ojea Quintana wrote in an October report: “People’s access to food is a serious concern, and the most vulnerable children and elderly are at risk of starvation.”

Despite some flood damage this summer, analysts anticipate that the crop yield this fall was not severely affected by bad weather. Still, the overall food shortage persists, and even international aid groups have left the country during the lockdown.

The lack of imported fertilizers and farming materials, such as vinyl to cover the crops, has led to a lesser-than-anticipated harvest, according to Lee Sang-yong, editor in chief of Daily NK, a Seoul-based news service with informants inside North Korea.

The price of corn has been rising in the pandemic, a sign that more people are mixing corn with rice, or eating corn in lieu of rice, which is more difficult to obtain, Lee said.

“There are all sorts of effects because of this massive reduction of trade,” said Sokeel Park, South Korea country director of the nongovernmental organization Liberty in North Korea, which helps North Koreans resettle in the South.

In June, Kim called the country’s food situation “tense.” In late October, North Korea announced its plans to breed black swan as a way to make up for its inefficient farming sector and food shortage, saying the meat “is delicious and has medicinal value.” A senior official of the Workers’ Party of Korea led a ceremony opening a black swan center at a duck farm.

Swans are not known to be particular delicacies, and some analysts say that such efforts are shortsighted solutions being tried in place of systemic improvements to the economy. North Korea has a history of promoting exotic animals as innovative food solutions. Ostrich farms were built after the deadly famine of the 1990s, an ordeal known as the “arduous march.”

Low levels of trade have persisted, and there are some signs that North Korea is taking steps to resume land-based trade with China, according to South Korean intelligence officials. For decades, Beijing has been an economic lifeline for North Korea.

North Korea imported about 1 million tons of grains, wheat and rice in the past year to supplement its production, according to a quarterly report by the U.N. Food and Agriculture Organization issued Dec. 2.

“North Korea went out of the way to stabilize food prices amid the disastrous economy. The rice price was stable on the surface because of heavy state interventions ... and unofficial receipt of Chinese aids. However, we do not know for how much longer it can hold,” said Cho Han-bum, a senior researcher at the Korea Institute for National Unification, a government-funded think tank in Seoul.

With the concerns over new coronavirus variants and lack of vaccines,North Korea may not fully resume trade until after the Winter Olympic Games in Beijing in February, Cho said, calling the possible delay “a hopeless scenario for the North Korean people.”

How much the coronavirus has affected North Korea is unclear. The country maintains that it has had no positive cases, but it has taken more drastic measures than were adopted during previous epidemic outbreaks.

North Koreans developed their own ways to endure long periods of difficulty after the 1990s famine. Since then, local markets called “jangmadang” have opened and operate under state watch, with citizens being allowed to sell and trade goods and food.

But the shortage of imports and supplies has in turn limited the availability of food and other necessities such as medicines and batteries at the markets.

Urban residents are reliant on the markets and have hit worse by the lockdown than have those in rural areas, who can farm their own food and sell and barter agricultural products, said Jiro Ishimaru, the founder of the Japan-based news service Asia Press Rimjingang, which has informants inside North Korea.

“Those who are having the most difficult time and dying of starvation are dying because they have no money, not because there is no rice growing inside the country,” Ishimaru said.

The trade blockade is likely also to have caused price inflation in the markets and a shortage of domestic and foreign currency for buying goods, said Peter Ward, a Seoul-basedspecialist on the North Korean economy.

“They will have more-volatile prices, food prices will be more inflated there, people may be struggling to acquire (goods) and lost purchasing power as a result of covid and anti-market measures, and they might be struggling to feed themselves,” Ward said.

The lack of access to medication at the markets has made it difficult to treat pneumonia and other cold-weather ailments as winter approaches, Ishimaru said, adding that the shortage has hurt the elderly and caretakers who have lost jobs and now cannot provide care.

Intensifying crackdowns on people moving between provinces and the illegal use of cellphones have severely limited people’s ability to trade food and goods. Even defectors who have regularly sent remittances back into North Korea are finding it difficult to reach their families or are running into more scam brokers who pocket the money themselves.

“The North Koreans who are here (in the South), a lot of them have lost contact with family members, or it’s more difficult for them to ... send money,” said Park, of Liberty in North Korea, the group helping defectors.

The halted trade and ban on travel between provinces also led to unemployment for the workers who relied on the shipment of goods from the North Korea-China border to other parts of the country, including operators of trucks and hand wagons, and those who cooked food for the workers and delivered goods to markets.

“It’s not a simple food shortage issue, but an economic issue,” Ishimaru said.

The Washington Post’s Min Joo Kim contributed to this report.