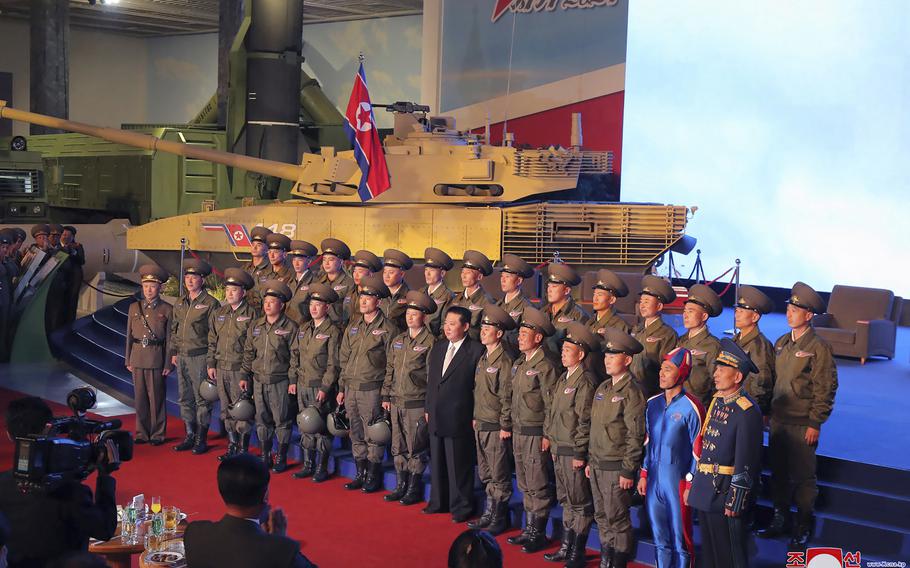 North Korean leader Kim Jong Un, center, poses for a group photo with fighter pilots who made the demonstration flight at the opening of an exhibition of weapons systems in Pyongyang, North Korea, Monday, Oct. 11, 2021. (Korean Central News Agency/Korea News Service via AP)

North Korean state media on Tuesday released footage of Kim Jong Un smiling and clapping as shirtless soldiers participated in an exhibition intended to showcase the muscular power of the country’s troops, as well as weapons Pyongyang had developed to launch nuclear strikes.

The video footage showed uniformed soldiers striking their bare-chested colleagues with wooden posts and breaking apparent slabs of concrete placed on soldiers’ stomachs with a mallet. Others had bricks smashed over their heads.

One particularly dramatic sequence showed a shirtless soldier breaking out of chains and lying on broken glass before a slab of concrete was placed on his stomach and smashed.

The extraordinary videos were part of a “self-defense” exhibition on Monday in which totalitarian North Korea showcased its latest nuclear and military weaponry, including a version of the “hypersonic” weapon that Pyongyang said it tested last month. Analysts have expressed doubts over that weapon’s capabilities.

In a speech, Kim said he was building an “invincible” military to counter what he called persistent U.S. hostility, and not to renew hostilities with South Korea.

“The U.S. has frequently signaled it’s not hostile to our state, but there is no action-based evidence to make us believe that they are not hostile,” Kim said Monday, according to the official Korean Central News Agency. “The U.S. is continuing to create tensions in the region with its wrong judgments and actions.”

The exhibition marked the 76th anniversary of North Korea’s ruling Workers’ Party. It was the first event of its kind since Kim took control of the impoverished country in late 2011, according to South Korean officials.

In recent weeks, North Korea has conducted several missile tests designed to showcase milestone developments in its military and nuclear weapons program. South Korea has also showed off new military technology of its own.