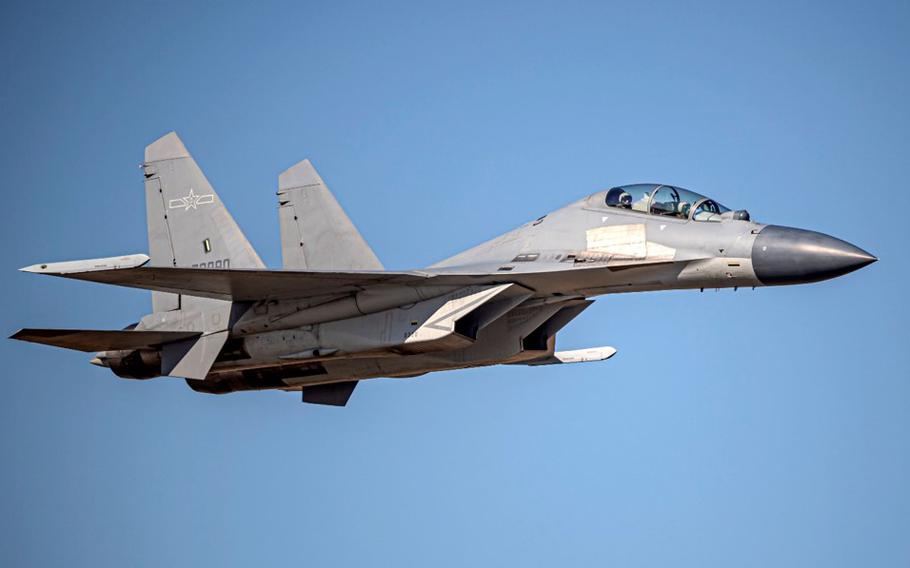 A Chinese J-16. Chinese warplanes made multiple incursions close to Taiwan on Saturday as their second recent major display of military might continued for a second day. (Wikipedia Commons)

(Tribune News Service) — Chinese warplanes made multiple incursions close to Taiwan on Saturday as their second recent major display of military might continued for a second day.

That follows the 38 planes that buzzed the area Friday, according to a ministry estimate: 13 in the air defense identification zone (ADIZ) in nighttime hours and 25 earlier in the day.

Taiwan’s military continues to respond with radio warnings, and has deployed its air defense missile systems to monitor the activity.

Foreign minister Joseph Wu said in a tweet that the 38 jets flown into Taiwan’s ADIZ on Friday was “the largest number of daily sorties on record.”

China’s latest show of force came after Beijing’s Taiwan Affairs Office issued an angry denunciation of Wu on its official Weibo account. China derided his efforts to strengthen Taiwan’s international relations as “shrilling and moaning,” and “the buzzing of flies.”

The statement followed Wu’s assertion, in a Sept. 27 speech to the Hoover Institution in the U.S., that Taiwan is under constant threat from China, including gray zone tactics and information security attacks. China is attempting to lure Taiwan’s diplomatic allies and exclude it from important international organizations, Wu said.

Taiwan’s Mainland Affairs Council hit back at China’s criticism of Wu, calling it “unprecedented verbal abuse in the international community.”

China has increased its diplomatic, economic and military pressure on Taiwan over the past year. The Chinese air force made more than 500 incursions into Taiwan’s ADIZ in the first nine months of 2021, Defense Minister Chiu Kuo-cheng told lawmakers, compared with more than 300 a year in the past.

The latest incursions came as the National Day holiday started on the mainland to celebrate the 72nd anniversary of the founding of the country.

Friday’s flights included sorties by 28 J-16s — a China-built strike fighter — and four SU-30s, the Taiwan defense ministry said in a statement. The SU-30 fighter is built by Russia’s Sukhoi Aviation Corp. and is used in multiple roles. Another 16 J-16s, four SU-30s and two Chinese-made Y-8s flew on Saturday.

Some 24 PLA aircraft flew into Taiwan’s air defense identification zone a week earlier, one day after Taiwan announced it had requested to join the Comprehensive and Progressive Agreement for Trans-Pacific Partnership. In June, China’s airforce sent 28 planes close to Taiwan in what was then the biggest sortie this year.