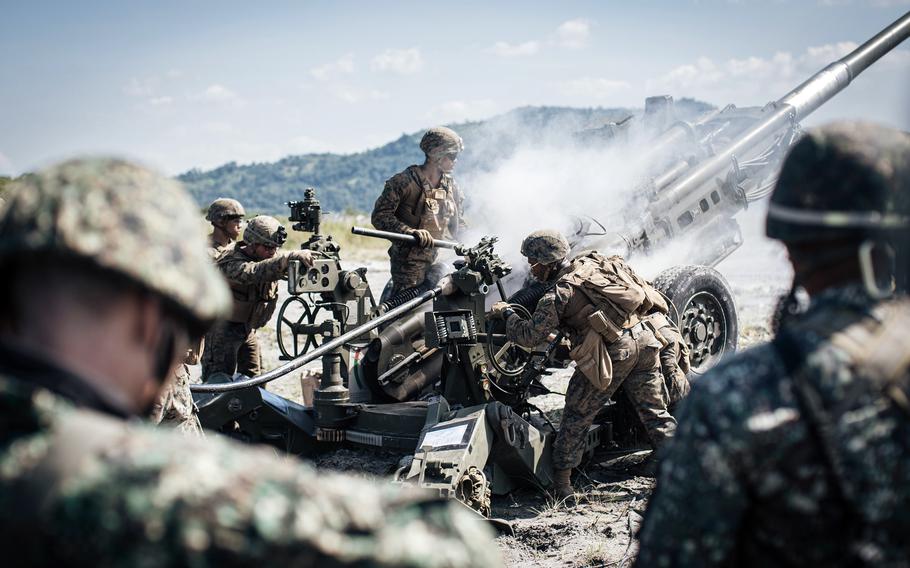 The use of shore-based weapons will figure prominently in an annual exercise involving U.S., Philippine and Japanese troops that kicked off in the Philippines this week, according to U.S. officials.

The start of Kamandag — short for “Kaagapay Ng Mga Mandirigma Ng Dagat,” or “Cooperation of Warriors of the Sea” — was announced by the U.S. Embassy in Manila in a Facebook post Thursday.

The exercise, which began in 2017 as a replacement for the large-scale PHIBLEX amphibious landing drill, was canceled last year because of the coronavirus pandemic.

“We must be able to outmaneuver our enemies in the same way that we shall be able to maneuver this virus and still be able to continue to train, because we have a very big responsibility in terms of defense and security of our people,” Caculitan said during Kamandag’s opening ceremony at Fort Bonifacio in Taguig city, the newspaper reported.

A dozen Marines from the Okinawa-based 3rd Marine Division are on the island of Luzon training with Philippine personnel primarily focused on coastal defense and counter-landing operations., Maj. Kurt Stahl, a spokesman for the division, said in an email Thursday.

Training involving about 400 Marines that was scheduled for the Philippines was relocated Camp Fuji on mainland Japan and Okinawa due to the coronavirus pandemic, Stahl said.

One shore-based weapon the Philippines plans to purchase is the BrahMos supersonic cruise missile, developed by Russia and India. The country might also acquire Boeing’s Harpoon anti-ship missile, according to Ian Chong, an associate professor of political science at the National University of Singapore.

The BrahMos can be launched from air, land, sea and underwater and can carry conventional warheads weighing up to 660 pounds. It has a range of 180 miles and there is no known weapons system that can intercept it, according to BrahMos Aerospace.

“The Harpoon, first deployed in 1977, is an all-weather, over-the-horizon, anti-ship missile system,” Boeing states on its website. “It has a low-level, sea-skimming cruise trajectory with active radar guidance.”

The Harpoon weighs over 1,000 pounds and can fly up to 77 miles, according to its technical specifications.

Shore-based weapons may provide a means for the Philippines to defend maritime territory despite the clear limitations of the Philippine Air Force, Chong said in an email Thursday.

“That said, actually using these systems, especially with regard to gray-zone activities, could involve a degree of escalation that the Philippine government and its partners and allies wish to avoid,” he said.

Gray zone tactics are coercive activities that fall short of warfare. China has employed them against the Philippines in recent years. For example, it has illegally occupied territory claimed by the Philippines and sent a fleet of maritime militia to harass fishermen who enter disputed waters.

Both the Marine Corps and the Japan Ground Self-Defense Force have been exploring the use of ground troops to call in fire on ships off-shore, Chong said.