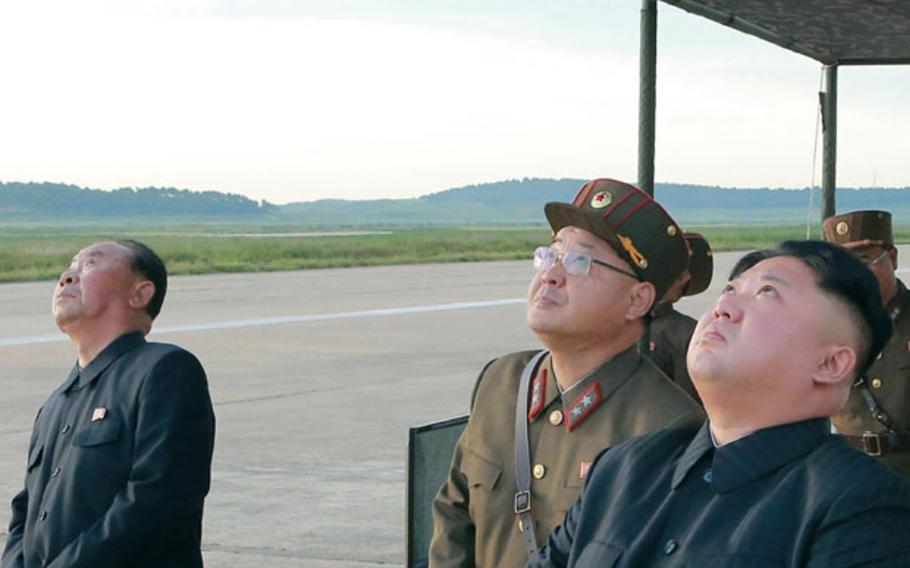 North Korea fired two ballistic missiles into the sea off its eastern coast in the afternoon, according to the South Korean military.

South Korea’s Joint Chiefs of Staff confirmed those launches to Stars and Stripes and said the missiles flew about 500 miles at a maximum altitude of 37 miles.

“Our military tightened surveillance and security, [maintained] their readiness posture, and the [South Koreans] and the U.S. are working closely together,” a JSC spokesperson said in a text message on the customary condition of anonymity.

Meanwhile, South Korea announced it had succeeded in test-firing a submarine-launched ballistic missile, according to the Agency for Defense Development.

It is now one of a handful of nations to successfully develop an SLBM after the United States, Russia, China, Britain, France and India. North Korea also claims to have successfully test-fired one.

South Korean President Moon Jae-in was expected to meet Wednesday with the National Security Council about the North Korean missile test, according to a statement from the presidential Blue House.

The U.S. Indo-Pacific Command said the missiles did “not pose an immediate threat to U.S. personnel or territory, or to our allies.”

“The missile launch highlights the destabilizing impact of [North Korea’s] illicit weapons program,” a statement from the command added.

Japanese Prime Minister Yoshihide Suga told reporters the missiles landed in the sea outside of his country’s exclusive economic zone. He called the launches “outrageous” actions that threaten peace and security in the region.

The United Nations Security Council expressly forbids North Korea from testing ballistic missiles, which are powered by rockets and fly in a high arch.

The launches come days after Pyongyang said it fired long-range cruise missiles that flew 932 miles for over two hours on Saturday and Sunday. The missiles’ range, if accurate, would be enough to reach Tokyo.

Jet-powered cruise missiles fly at lower altitudes and are harder to detect than ballistic missiles.

The launches happened amid a trilateral meeting in Tokyo, where the U.S. envoy for North Korea was meeting with his counterparts from South Korea and Japan. Also Wednesday, South Korean Foreign Affairs Minister Chung Eui-yong and his Chinese counterpart, Wang Yi, discussed North Korea and their countries’ ties.

Prior to the weekend cruise-missile tests, the North's last known launch was in March. It fired two short-range ballistic missiles into the sea.