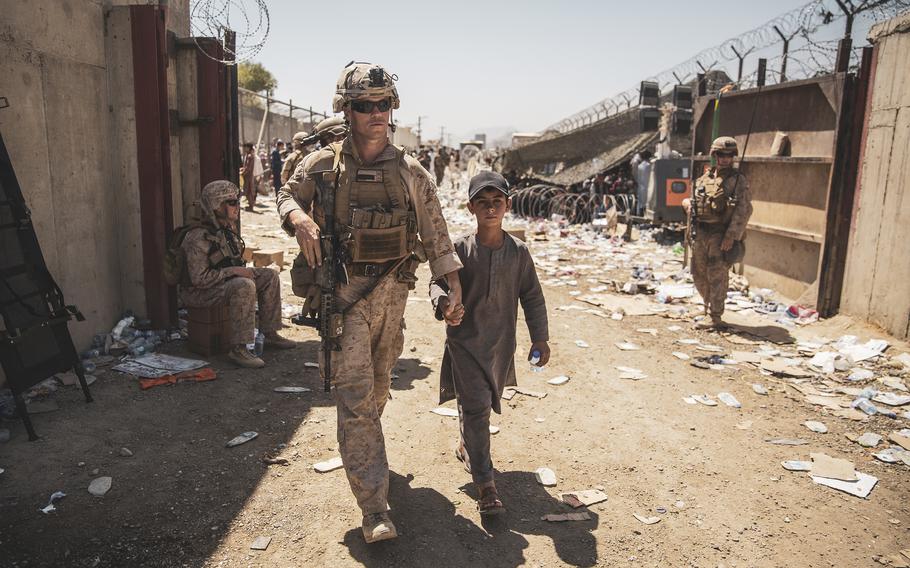 CAMP HUMPHREYS, South Korea — South Korean government officials on Friday expressed their "deep condolences" after a pair of attacks at the primary airport in Afghanistan killed at least 13 U.S. troops and 60 locals.

Two suicide bombers and several gunmen on Thursday attacked the gates of Hamid Karzai International Airport in Kabul, where U.S. forces were screening evacuees for outbound flights. Islamic State militants claimed responsibility for the attacks, according to the terrorist-affiliated Amaq News Agency.

In Seoul, a Defense Ministry official issued a statement that recalled the assistance U.S. troops rendered to the South Korean military at the airport earlier in the week.

“We express our condolences for the U.S. soldiers’ deaths and injuries,” the official told Stars and Stripes on Friday on the customary condition of anonymity. “We greatly appreciate U.S. troops helping us in the return of Afghan facilitators safely. We want to express a big thanks for U.S. troops.”

The Ministry of Foreign Affairs in a separate statement Friday expressed “deep condolences to the victims and their families,” adding that the country will pledge to actively participate in the fight against terrorism.

At least 10 of the service members killed were U.S Marines, according to a statement from Marine Corps spokesman Maj. Jim Stenger. Around 18 other troops were wounded in the attacks and were airlifted out of the country on “specially equipped C-17s with embarked surgical units,” Navy Capt. Bill Urban, the spokesman for U.S. Central Command, said in a separate statement.

The attacks came less than a day after nearly 400 Afghans were evacuated to South Korea. Afghans previously employed by the South Korean government, such as embassy and hospital workers, were airlifted out of Afghanistan with their families.

While the South Korean military evacuated the Afghans using their own aircraft, U.S. troops were instrumental in their operation, government officials said Thursday. Park Min Ho, director of the Defense Ministry’s Multilateral Security Policy Division, told Stars and Stripes that the U.S. military “persuaded the Taliban through negotiations … so we could pass through [their] security inspection” at the airport, as well as providing aerial assistance to the airport.

President Joe Biden in an emotional speech Thursday described the casualties as “heroes who have been engaged in a dangerous, selfless mission to save the lives of others.”

“They were part of the bravest, most capable, and the most selfless military on the face of the Earth,” he said. “And they were part of, simply, what I call the ‘backbone of America.’ They’re the spine of America, the best the country has to offer.”

Roughly 5,800 U.S. troops remain at the Kabul airport to assist in evacuating Americans and Afghans allies by an Aug. 31 deadline.