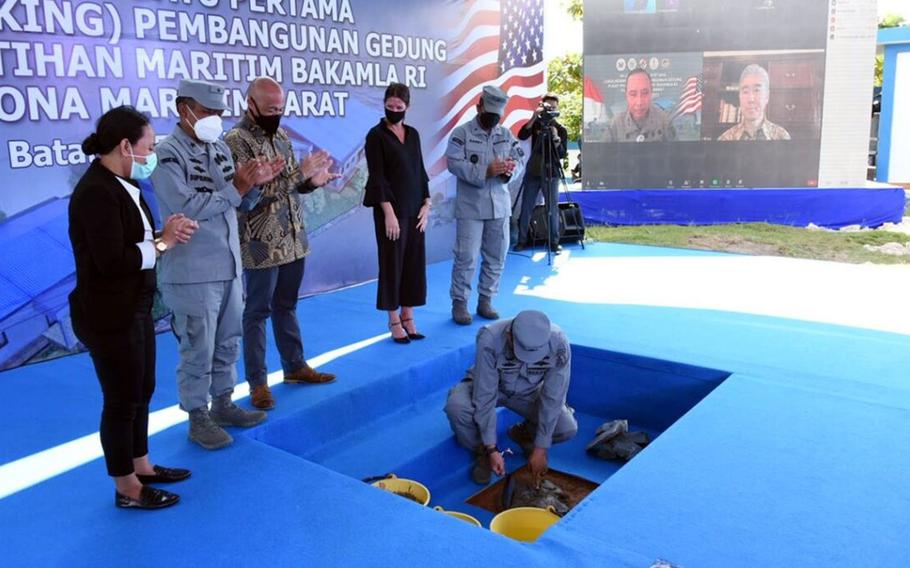 Representatives from the U.S. and Indonesia break ground on a maritime training center in Batam, Indonesia, Friday, June 25, 2021. The center is being built near the mouth of the Malacca Strait, a prime global shipping channel linking the Indian and Pacific oceans. (U.S. Embassy in Jakarta)

The United States and Indonesia broke ground recently on a $3.5 million maritime training center on the edge of the contentious South China Sea, according to the U.S. Embassy in Indonesia.

The center is being built in Batam, Indonesia, near the mouth of the Malacca Strait, a prime global shipping channel linking the Indian and Pacific oceans. China is heavily reliant on the channel for trade and has sought to build up its navy to prevent any hostile power from blocking it, according to a Monday report in the Diplomat.

The training center will bolster the ongoing partnership between the U.S. and Indonesia to keep the vital region secure, according to U.S. Ambassador to Indonesia Sung Kim.

The center will include classrooms, offices, barracks, a dining galley and a vessel launch ramp, according to an embassy news release. It will be able to accommodate up to 50 students and 12 instructors.

It’s unclear exactly what kind of training will take place at the center, but Kim said it will focus on trade-route security. Spokespeople at the U.S. Embassy in Indonesia did not respond to queries on Tuesday.

It will be owned and operated by Bakamla with the U.S. assisting, the embassy said.

The region is a continuous point of tension between Beijing and the U.S. and its allies, defense strategist researcher Josh Chang of the Center for Strategic and Budgetary Assessments in Washington, D.C., told Stars and Stripes via email on Tuesday.

“This maritime center strengthens the U.S.-Indonesia bilateral relationship amidst growing tensions between Indonesia and China over the latter's maritime intrusions in Jakarta's exclusive economic zones, particularly near the Natuna Islands,” he said.