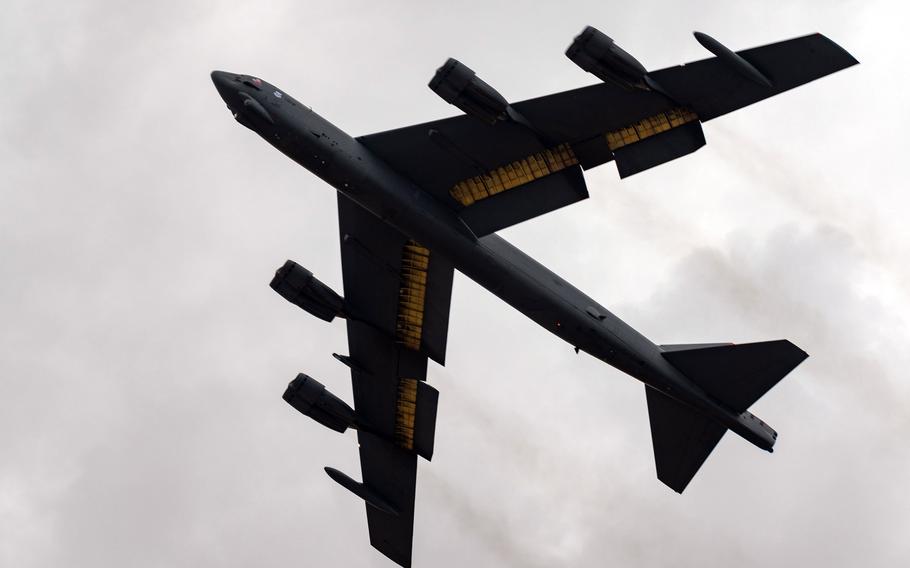 Air Force B-52H bombers returned to the United States from a European deployment by way of a 12,000-mile mission through the Arctic and Pacific late last week, the Air Force said in a news release Monday.

Four Stratofortress aircraft had been operating out of Morón Air Base, Spain, since May 17 as part of the bomber task force deployment.

The Air Force did not specify how many B52s flew in the final 27-hourlong mission over June 17-18, which concluded when the bombers reached their home station of Barksdale Air Force Base, La.

During the extended mission, the bombers integrated with Norwegian joint terminal attack controller personnel in the Nordic region, then through the Arctic Circle and into the northern Pacific to support U.S. Indo-Pacific Command, the Air Force said.

The lengthy mission required far-reaching aerial refueling, with flying tankers from three major commands linking up with the bombers.

The Arctic and the Western Pacific are regions of growing importance in the competition among the U.S., Russia and China.

Pentagon strategy in recent years has begun shifting focus away from the Middle East and toward the Pacific, where China’s military is steadily emerging.

Meanwhile, melting Arctic ice due to global climate change is reconfiguring the region and spurring competition among some nations for natural resources.

Bomber task force missions aim to assure allies and partners that the Air Force is ready to quickly respond to any contingency, the service said.

“Our unparalleled global strike capability is the backbone of our combat-credible force,” Gen. Jeff Harrigian, commander of U.S. Air Forces in Europe and Air Forces Africa, said in the news release. “That force is the foundation of our extended deterrence strategy that safeguards both U.S. security and that of our allies and partners.”