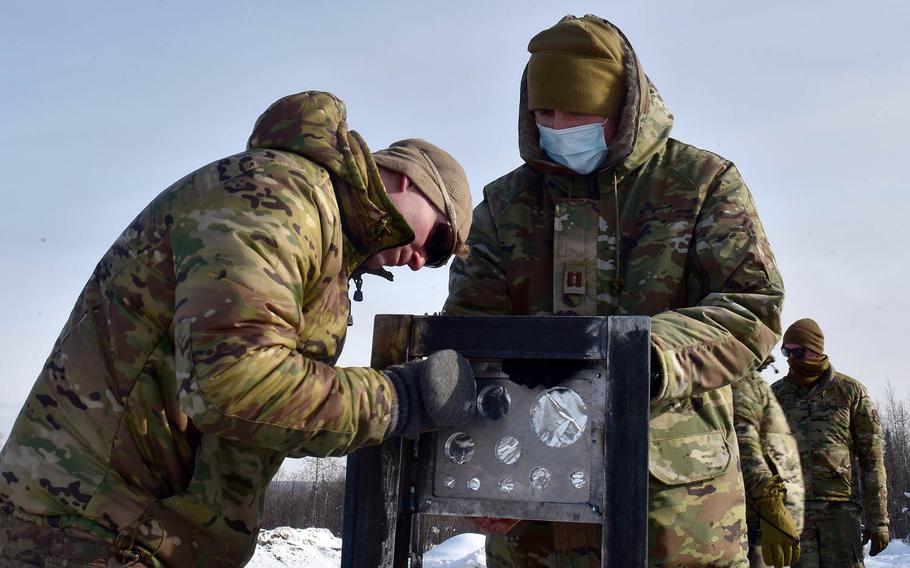 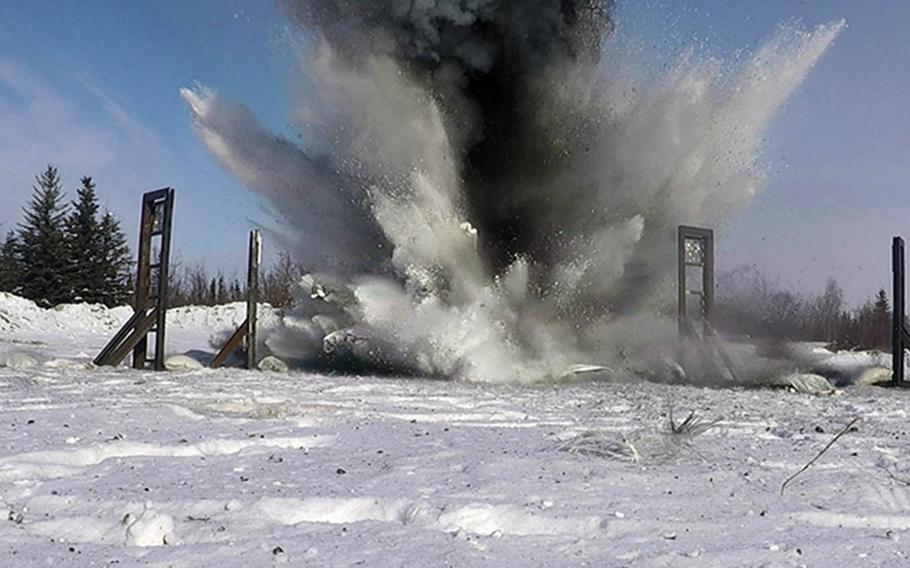 An explosive charge detonates at Eielson Air Force Base, Alaska, March 18, 2021, during an experiment to see if snow-filled bags can be used to dampen shockwaves from such blasts. (Danielle Sukhlall/U.S. Air Force)

Frosty’s made of it, kids play in it and Christmas carolers sing about it. And now we know bomb blasts can be hushed with it.

That’s what a team of innovative airmen in Alaska confirmed recently during a four-day experiment into how effective snow is at dampening dangerous shockwaves from ordnance blasts. Ordnance teams normally use sand or water barriers for that job.

The tests revealed that charges surrounded by bags filled with snow significantly reduced pressure waves emanating from the blast.

That knowledge may provide an option to commanders looking for the best blast protection for their people and installations once snow barriers become available, said Air Force Master Sgt. Chance Rupp, an explosive ordnance disposal flight chief at Eielson Air Force Base. His idea kindled the experiment.

Rupp said he envisions development of a snow reference scale: “With this much charge, use this much snow.”

Shrapnel and other projectiles are an obvious and visual danger from a detonation, but shockwaves from an explosion, known as overpressure, can also wreak havoc on bodies, buildings and equipment.

“Basically, anything that is full of air inside your body is going to be at risk of rupturing or having damage when you’re exposed to overpressures — ears, lungs,” Rupp said during a phone interview on April 26 with Stars and Stripes.

“Glass is also a pretty big weakness because when broken it becomes a hazard itself,” he said.

Blast mitigation of this type is typically done using bags filled with sand or containers holding water, but the Arctic cold makes their use a challenge during many months of the year, Rupp said.

“Whenever we’re trying to mitigate a blast, it takes a significant amount of material around that explosive device to achieve a desired effect,” he said. “When it comes to using sand or sandbags or soil, it’s difficult here because the ground is frozen. You have to use mechanized equipment (to dig it up), and even if you use that you’re probably going to get big chunks of ice that you have to break down.”

And with temperatures often well below zero, water freezes quickly.

Rupp said he and fellow EOD specialists had “kicked around” the idea of somehow using snow as blast mitigation.

“One of the things we try to do up here at Eielson is figure out the best way to adapt our techniques and tactics to winters up here,” he said. “There are a lot of things that fit the mold for the lower 48, the lower latitudes, but it’s different up here in the wintertime.”

In its Arctic strategy released last summer, the Air Force called the development of cold-weather materials “foundational to future operations.”

During a monthly demolition qualification event in the winter, however, Rupp and a few others conducted an impromptu test of the concept.

They buried about 10 feet of detonation cord under a foot of snow and in another location laid the same length on the surface.

The difference in sound was significant, and soon after Rupp wrote an experimental design paper for a class he was enrolled in.

Rupp submitted the concept to Iceman Spark, a loose collaboration of airmen at Eielson who foster innovations from within the ranks to support the 354th Fighter Wing.

Iceman Spark’s director of innovation, Tech Sgt. Nicholas Cavanaugh, sent it on to Force Warfighter Operations in the Materials and Manufacturing Directorate at Wright-Patterson Air Force Base in Ohio. The scientists and engineers at the directorate test and field all types of material for the Air Force.

High-tech instruments exist for measuring blast overpressure, but the extreme cold made it impractical to use them for the rest, said 1st Lt. Tyler Despard, who is assigned to the directorate and oversaw the proof-of-concept testing in Alaska in March.

Instead, they used a simple and inexpensive device called a “bikini gauge,” which consists of two aluminum plates with matching holes of various sizes, he said. A thin sheet of aluminum foil is squeezed between them.

For the testing, charges of C-4 explosives were placed in an open range and enclosed with up to 18 snow-filled bags.

“We would set off similar charges with and without mitigation,” he said.

In comparing the tears to the aluminum foil between the two, “we saw a dramatic reduction in the damage done to those gauges,” Despard said.

The findings of the experiment have been turned over to the Naval Explosive Ordnance Disposal Technology Division, the entity charged with creating and updating EOD standards across the Defense Department.

“They are working through the process of looking at our data, determining if any additional testing or design work is needed,” Despard said. “Our hope is that will become standard Arctic operating procedure.”

As director of Iceman Spark, Cavanaugh sees the larger context for the innovation.

“One of the big things out of this is that we’re trying to find new ways to operate in this newest contested domain, that being the Arctic environment,” Cavanaugh said.

“[This] is the kind of stuff we’re trying to get after in order to ensure that we’re more effective and actually upholding the Arctic strategy,” he said.