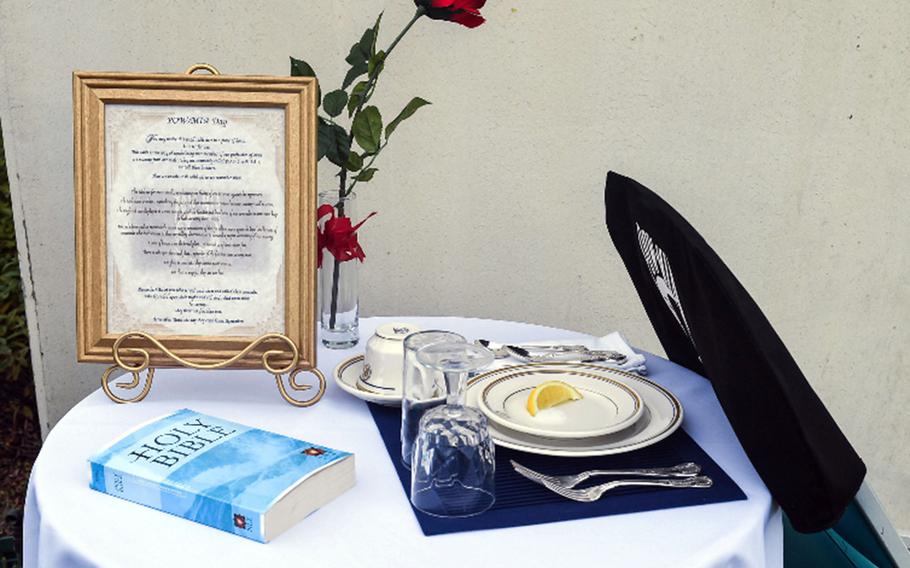 TOKYO — A religious freedom and diversity group is demanding that a naval air station in Japan remove a Bible from a POW-MIA table on base.

The group also sent the letter to Army Gen. Mark Milley, chairman of the Joint Chiefs of Staff, and acting Secretary of the Navy Thomas Harker.

The POW-MIA table is a tradition often found in official military dining facilities that honors missing and captured service members.

According to Navy instruction 1710.7A for table settings for all service branches, the table must be round and include a white tablecloth, an empty chair, a black napkin, a single red rose, a yellow candle and ribbon, lemon slices, salt and an overturned wine glass.

The regulation says the display includes a Bible to represent “faith in a higher power and the pledge to our country, founded as one nation under God.”

Weinstein, an Air Force veteran, said including the Bible violates the core values of the military and damages unity, morale and diversity.

“This is not a move against Christianity, but one toward inclusivity,” he said. “Not every sailor is a white, straight Anglo-Saxon Christian male.”

Weinstein said he had not received a response from NAF Atsugi as of Monday.

Base spokesman Sam Samuelson told Stars and Stripes via email Monday that he was not aware of the letter.

“The POW-MIA table here is a significant legacy display intended to memorialize and honor American POWs and MIAs among a varied military demographic and is certainly greater than the sum of its parts,” Samuelson wrote. “We can absolutely balance the larger meaning of the table with appropriate policies and the interests of our diverse base culture.”

Over the past five years, the MRFF’s petitions resulted in the removal of Bibles from POW-MIA tables at Wright Patterson Air Force Base, Ohio; four Veterans’ Administration offices in Pennsylvania, Texas and Ohio; and an allergy clinic at Eglin Air Force Base, Fla.

In 2018, the MRFF filed an inspector general complaint against the Navy over a Bible that was included in a POW-MIA table display at U.S. Naval Hospital Okinawa.

In May of 2019, the MRFF backed a federal lawsuit filed against the Manchester Veterans Administration Medical Center in New Hampshire for including a Bible on its POW-MIA table following complaints relayed through the foundation.

Weinstein said the goal of the MRFF is not to eliminate Bibles, but to promote religious diversity.

“The POW-MIA table is a somber and emotional display,” Weinstein said. “Including a Bible alienates service members of other cultural or religious groups and is wrong on every possible level. No religious text, not just the Bible, has a place in that display. If the table included a Quran, Book of Mormon or a Satanist text, there would be blood in the streets.”