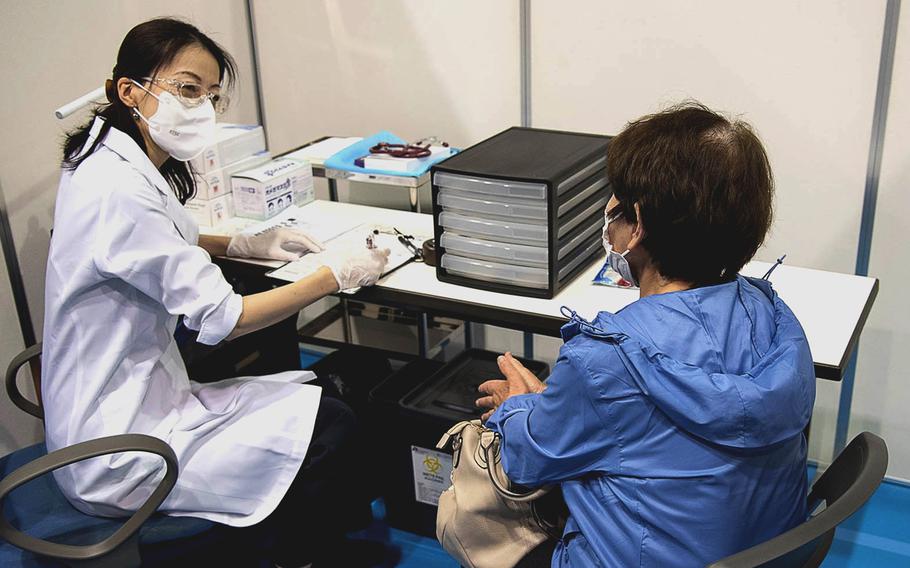 Buy Photo
A woman checks in at a COVID-19 vaccination site in Yokohama, Japan, May 17, 2021. (Akifumi Ishikawa/Stars and Stripes)

TOKYO — The U.S. military in Japan and South Korea reported six new cases of COVID-19 between Friday and 6 p.m. Monday.

A South Korean contractor at Camp Humphreys, the headquarters for U.S. Forces Korea south of Seoul, tested positive for the coronavirus respiratory disease on Friday, according to a USFK news release. The contractor is now isolated at a Korean medical facility after having contact with another contractor who had developed COVID-19 symptoms.

Camps Kinser and Hansen, both on Okinawa, each have one new case of COVID-19, according to a Facebook post Monday by Marine Corps Installations Pacific.

Kadena Air Base, also on Japan’s southern island prefecture, had three people contract COVID-19, according to a base Facebook post on Friday. One was identified while in quarantine after traveling outside of Japan, the second tested positive after developing symptoms and the third had contact with another recently infected person.

Okinawa prefecture on Sunday reported 231 newly infected people, a pandemic one-day high for the prefecture, according to its coronavirus tracking website. Japanese Prime Minister Yoshihide Suge declared a state of emergency there starting Sunday until June 20, according to public broadcaster NHK.

The Okinawa prefectural government is asking individuals traveling to Okinawa to have a negative COVID-19 test within 72 hours of their arrival, according to a Monday post on Yokota Air Base’s Facebook page.

“This is not a requirement, but travelers are advised to check with their airlines prior to any scheduled departures for any airline specific changes,” the message said.

Okinawa expects bars and restaurants that serve alcohol to close and shopping malls and sport clubs to close at 8 p.m., according to NHK.

Tokyo, Osaka and seven other prefectures are under public health emergencies until May 31 as a fourth wave of the coronavirus unfolds across the country.

Although Okinawa’s numbers hit a new high over the weekend, those in Osaka, which hit a record high 1,260 newly infected people May 1, are subsiding. On Monday, the prefecture, the second-largest metro area in Japan, reported 216 new cases of COVID-19 and 35 deaths, according to NHK.

Osaka reported 415 new cases on Friday, 406 on Saturday and 274 on Sunday, according to its COVID-19 data website.

Tokyo and Osaka, among other cities, opened mass inoculation centers Monday to administer the two-shot Moderna vaccine approved Friday for distribution in Japan, the broadcaster reported.