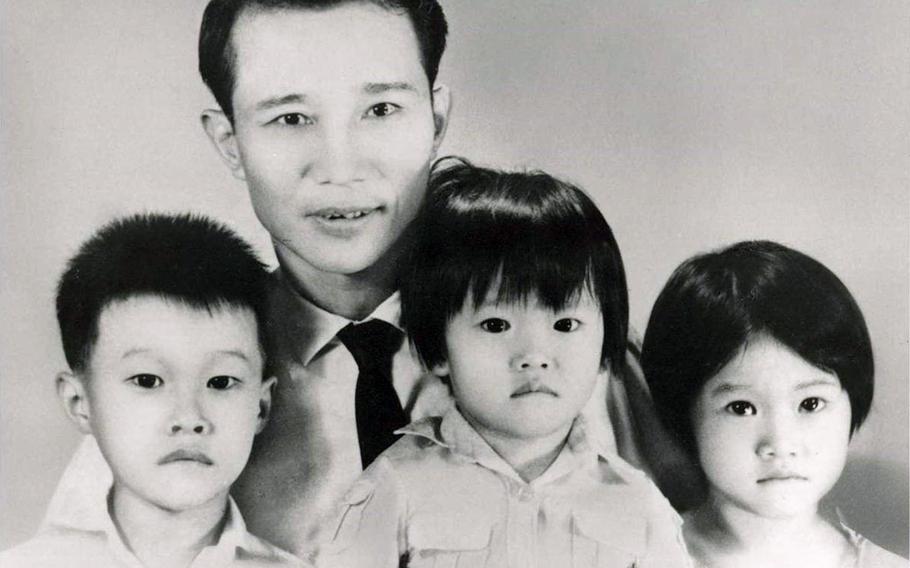 Army Maj. Gen. Viet Luong, far left, was 9 years old when he fled Vietnam with his family in 1975. He's pictured here with his father and siblings in 1973. (Viet Luong)

TOKYO – For the Army’s first Vietnamese-born general officer, the trauma of escaping to America with his family during the Vietnam War was a call to foster a more inclusive military.

Maj. Gen. Viet Luong, commander of U.S. Army Japan, was 9 years old when he fled Vietnam with his family in 1975. He shared his story during a U.S. Army Japan Facebook Live event on Tuesday as part of Asian American and Pacific Islander Heritage Month. Luong faced racism as a young immigrant growing up in Los Angeles, he told Stars and Stripes via email Wednesday. The coupling of his family’s harrowing ordeal in Vietnam and the discrimination he faced drove his passion for diversity and inclusion, he said.

“Just to be honest, the scars from that event are indelible,” he said during the Facebook Live interview. “I don’t like to retell that story all that much, but I think it’s a story that needs to be told because it’s part of who we are as Americans.”

Luong’s father was the South Vietnamese marines’ executive officer just before the height of the war. One night, Luong said, he overheard him telling his mother that their country was doomed. With help from one of his father’s American friends, the family made plans to move to the United States.

Luong recalled staying in hotels around Vietnam and at a refugee compound with nothing but documentation and a few articles of clothing. On April 27, 1975, the family were corralled on a hot tarmac at Son Nhat Airport when, he said, “all hell broke loose.”

Luong saw mortars and artillery fire. He said he could hear small-arms fire surrounding the airport, and then the enemy bombed the airstrip.

Luong recalled cowering, lying face down, hearing his father yelling to stay down in between trying to soothe and reassure him that everything would be alright.

“People close by were getting hit,” Luong said. “I remember their screams and cries. I did pretty much the only thing a 9-year-old could do at that moment and said my Hail Marys and recited my prayers.”

The U.S. Marine Corps helped evacuate survivors via aircraft, and, in what Luong says is somewhat of a hazy memory, led them aboard the aircraft carrier USS Hancock to America.

He said watching his father guide his family through such a traumatic experience encouraged him to become a leader. In 1993, Luong became one of only 27 battalion commanders of Asian descent in the history of the 82nd Airborne Division.

At the time, he said, he felt a need to outperform his white counterparts to earn equal recognition.

“Maybe I was too naïve, but I thought if we all just do our jobs and do well, everything will work out,” Luong said Tuesday. “But it doesn’t work like that. In order to be successful, you need a lot of support, you need mentorship, and you need advocacy.

“I’m not bitter about it, but as I look back, I realize there were opportunities and doors open for my peers as far as advocacy that were available at nearly every turn that I didn’t have. To correct that, it’s going to take a little bit of time.”

About 4% of active-duty enlisted personnel and 8% of commissioned personnel in the U.S. military are of Asian descent, and only about 3% of all active-duty personnel are Pacific Islander, according to a December report from the Department of Defense Board on Diversity and Inclusion.

White officers represent 73% of all active-duty officers, the report said.

Luong said work still needs to be done to ensure the path to leadership positions is not more difficult or met with more resistance for some than others.

“In the Army, we have been having some very uncomfortable conversations to tackle the harmful behavior,” he said.

This year, Asian American and Pacific Islander Heritage Month comes after a wave of increased violence against Asians in America, including the March attacks in Atlanta that killed six Asian women.

Luong said that not all acts of racism are aggressive. Internal bias can be much subtler and, even if not explicitly harmful, create a toxic work environment, he said.

That includes comments about the stereotypical “good Asian,” assuming one race is quieter or more hardworking than another and other sweeping judgements.

Another Vietnamese-born leader, Air Force Brig. Gen. John Edwards, said the conversation around diversity extends to behavior as ambassadors of the military when overseas and making genuine attempts to understand the language and culture of host nations.

“The military is global by nature, and acceptance is critical to the mission,” he said in a video call with Stars and Stripes on Wednesday.

Edwards, director of the Nuclear Enterprise Directorate at the Defense Threat Reduction Agency in Fort Belvoir, Va., moved to the U.S. with his Vietnamese mother during the war. His father, an American Vietnam War veteran, was evacuated from the embassy roof just before the fall of Saigon.

“We lost all of our stuff, but most importantly, we remained together,” he said. “That was not the case for a lot of people.”

Edwards co-leads the American Asian and Pacific Islander component of a diversity and inclusion task force on Fort Belvoir. He said he was too young to remember much about his life in Vietnam but spending some of his developing years against the backdrop of war created a drive against racism.

Fully understanding host nation communities is a key element in “righting past wrongs” of the U.S. military, Edwards said.

“We are not taking our foot of the gas on this,” he said. “Our diversity is what makes us a smarter force.”