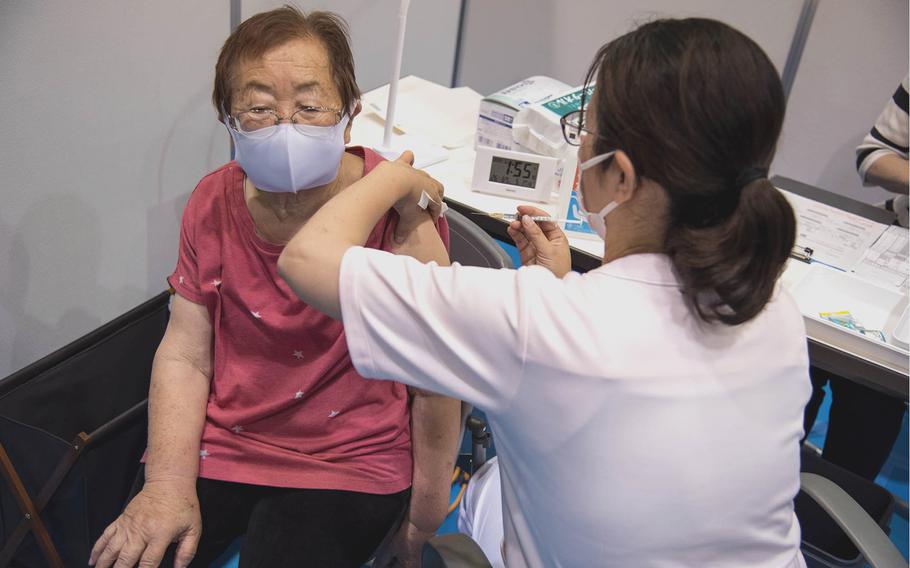 Buy Photo
A woman is inoculated at a COVID-19 vaccination center in Yokohama, Japan, Monday, May 17, 2021. (Akifumi Ishikawa/Stars and Stripes)

Fully vaccinated individuals with access to Naval Air Facility Atsugi and Marine Corps Air Station Iwakuni need not wear their masks outdoors, but must wear them indoors, according to orders posted on both bases’ Facebook pages.

MCAS Iwakuni requires everyone to wear masks indoors. Atsugi allows vaccinated individuals to do without masks indoors if the unit commander in charge of a workspace allows that and the space is clearly marked, according to the order Tuesday by base commander Capt. Manning Montagnet.

The revised mask policies at NAF Atsugi and MCAS Iwakuni are stricter than the relaxed policies adopted at six other U.S. installations in Japan and Guam on Monday. They all have one thing in common, however: All U.S. personnel, vaccinated or not, must continue to wear masks around Japanese co-workers and employees.

A person is fully vaccinated two weeks after being inoculated with a one-shot vaccine or the second of a two-shot vaccine, according to the Centers for Disease Control and Prevention.

At Sasebo Naval Base in southern Japan, commander Capt. David Adams said a recent bump in case numbers among Japanese employees is affecting unspecified departments. The base has reported three new COVID-19 infections since May 3.

“These additional positives have led to more close contact tracing, which further leads to additional individuals being placed in quarantine,” Adams wrote in a Facebook message Tuesday. “This has unfortunately hit certain departments and facilities hard, which requires limiting services until we clear the situation. Please be patient if customer service takes a little longer than usual at some facilities around the base.”

Adams said he expected to update the mask policy at Sasebo soon, but until then, we “have to have 100% mask use when we come into contact with any foreign national no matter your vaccination status. Please honor our host nation's request for mask usage. This is important.”

At MCAS Iwakuni, south of Hiroshima, two people have tested positive since Monday, according to a base Facebook post Tuesday. Neither were in quarantine at the time.

Yokosuka Naval Base, the homeport of the U.S. 7th Fleet 35 miles south of Tokyo, reported that five individuals, all of them affiliated with the U.S. military, had recently contracted the disease, according to a base news release.

Three people, two unimmunized and one immunized, tested positive during a medical screening. Two unimmunized people fell ill with COVID-19 symptoms, according to the base.

On Okinawa, three people at Camp Foster and two at Camp Hansen have contracted COVID-19, according to a Facebook post Monday by Marine Corps Installations Pacific.

Kadena Air Base, also on Okinawa, had two people test positive for the coronavirus, according to a base Facebook post late Monday. One recently traveled outside Japan and came up positive in the mandatory test before leaving quarantine. The other was also quarantined as a close contact of a previously infected person.

Tokyo reported another 732 people had tested positive Tuesday, 193 fewer than the same day a week ago, according to public broadcaster NHK.

Osaka prefecture, the nation’s second-largest metro area, on Monday reported 382 new infections, the lowest one-day count there since 341 on April 5, according to prefectural data.