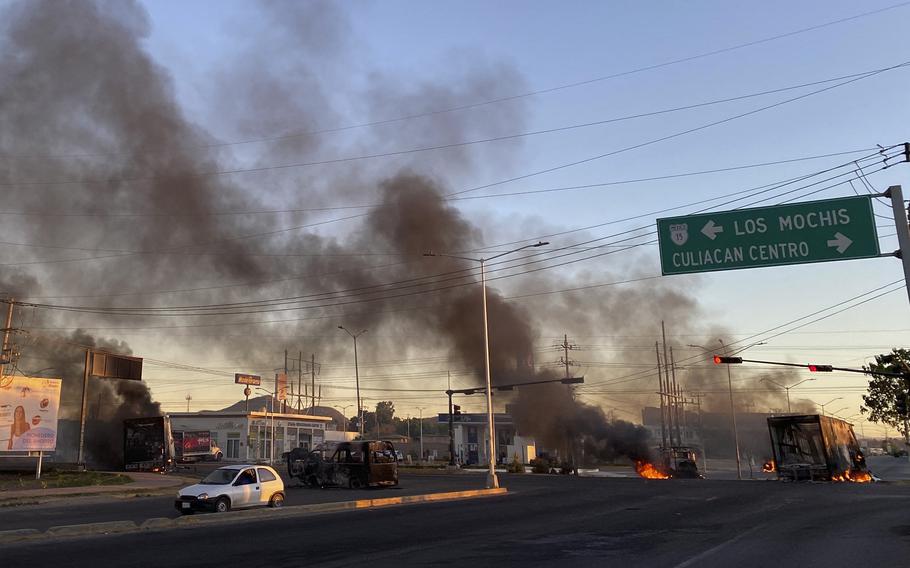 Burning vehicles are seen in the street during an operation to arrest the son of Joaquin "El Chapo" Guzman, Ovidio Guzman, in Culiacan, Sinaloa state, Mexico, on Thursday, Jan. 5, 2023. (Marcos Vizcarra, AFP/Getty Images)

The drug boss was arrested after a predawn gunfight in the city of Culiacán, a stronghold of Guzmán’s Sinaloa cartel, and was later flown to Mexico City, according to Mexican Secretary of Defense Luis Cresencio Sandoval González.

Officials canceled flights, suspended school and ordered residents to shelter in place as cartels responded to Guzmán’s arrest by throwing up road blockades across the state of Sinaloa, with the worst of the violence concentrated in Culiacán. Sandoval said cartel fighters blocked all six entrances to the city with burning vehicles and attacked the city’s airport as well as an air force base located nearby.

One local journalist, Marcos Vizcarra, said he had been effectively taken hostage along with other civilians in a hotel, their cars confiscated by armed gunmen to be incinerated in the streets.

In 2019, federal forces raided a luxurious Culiacán compound and subdued Ovidio Guzmán, who has helped lead the Sinaloa cartel since his father was sentenced to life in prison in the United States.

But as Mexican national guard members were attempting to take him into custody, hundreds of Sinaloa fighters seized control of the city, taking hostages, blocking intersections with burning vehicles and laying siege to a housing complex for the families of military personnel. Eight people were killed. President Andrés Manuel López Obrador eventually ordered Guzmán’s release to avoid more bloodshed. “You can’t value the life of a delinquent over the lives of the people,” he said.

Many Mexicans and U.S. law enforcement personnel were furious about the bungled operation, which they said humiliated federal forces and sent a dangerous message to criminal groups.

The recapture of Guzmán comes days before a scheduled visit to Mexico by President Joe Biden, the first trip to the country by a U.S. president since 2014.

Some in Mexico speculated that it was timed to please the Americans, who have grumbled about the efficacy of the Mexican president’s “hugs not bullets” crime-fighting strategy and his protection of a former defense minister charged by U.S. officials with collaborating with organized crime.

Retired Gen. Salvador Cienfuegos, who served as defense minister from 2012 to 2018, was arrested on suspicion of drug trafficking at Los Angeles International Airport in 2020, but was released after an intense lobbying campaign by Mexican diplomats. López Obrador later said Cienfuegos would not face charges in Mexico and accused the U.S. Drug Enforcement Administration of fabricating a case against him.

The incident, along with López Obrador’s decision to end the binational security pact known as the Mérida Initiative, outraged U.S. law enforcement.

Jorge Israel Hernandez, a professor at the National Autonomous University of Mexico, said on Twitter that López Obrador was “cleaning the house before Biden arrives, gift in hand with bow and all.”

Former President Vicente Fox, a major critic of López Obrador, said in a tweet that “Ovidio will be the gift for Biden.”

Meanwhile, the situation on the ground in Culiacán appeared far from contained.

After videos circulated showing gunfire at the airport, Aeromexico, the country’s largest airline, said one of its planes had been attacked, but said there had been no injuries. Rubén Rocha Moya, the governor of Sinaloa state, called on citizens “to remain calm and take shelter in their homes.”

Vizcarra, the local journalist being held by the cartel, said his car was seized by armed men Thursday morning while he was attempting to report on the violence in Culiacán. In a voice memo sent over WhatsApp, he said he had been taken to a hotel on the northern side of the city, and was being held with others. The armed men, he said, “are taking more keys to burn more cars.”