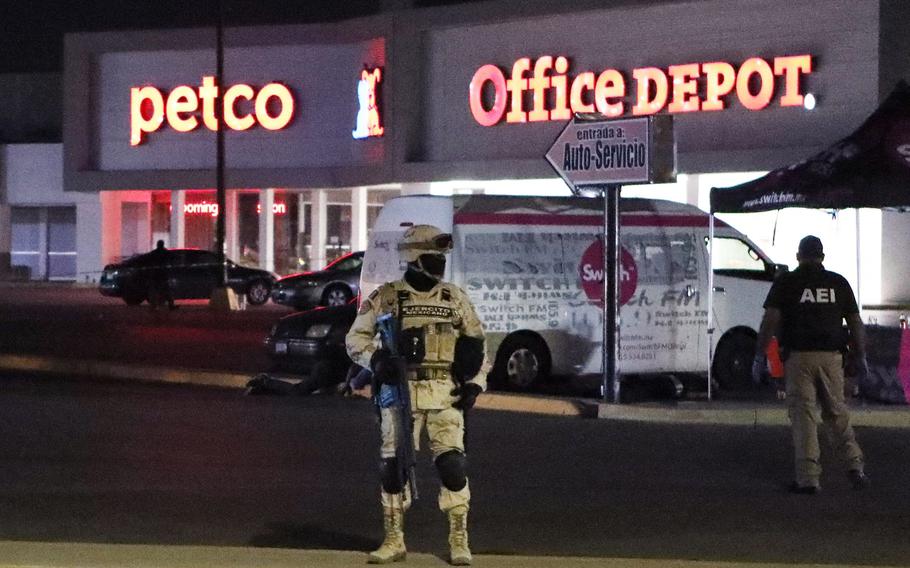 Members of the Mexican Army and forensic experts work at the site where four radio station workers were killed and two restaurant employees were wounded in Ciudad Juarez, Mexico, on Aug. 11, 2022. (Herika Martinez/AFP/Getty Images/TNS)

(Tribune News Service) — The gang violence is extreme, among the worst that Mexico has endured: In one city after another, mostly along the U.S. border, rival drug cartels are rioting, setting cars and stores on fire, shooting and killing innocent bystanders, including at least one child last week.

The causes are many, as is fear that the Mexican government is incapable of controlling a deadly wave of chaos that may already be the new normal.

The latest outburst erupted on Thursday night, after a few days of quiet, when armed cartel henchmen torched random cars in the small state of Colima in response to the government arrest of their leader. Last week, narcos from the Jalisco Nueva Generacion Cartel set 25 Oxxo convenience stores on fire in central Mexico following other arrests.

That set off riots in three other states. Spiraling violence in the border city of Juarez led to drug gangs shooting and killing nine passersby, including four journalists outside a Little Caesars, and a child at a convenience store.

The dynamic is complex: Mexico has been seizing large quantities of fentanyl, the lethal and lucrative drug that has pit one gang against another. Most of the synthetic narcotic is smuggled into the U.S. and in July authorities announced a record bust of nearly 1,200 pounds.

This illicit enterprise, experts agree, is also bad for legitimate investment, especially along the border's key manufacturing corridor. And some say it isn't helped by President Andres Manuel Lopez Obrador's apparently shifting policies, from what at first amounted to leniency — "hugs not bullets" — to the more recent crackdown.

"This is definitely making people afraid and making individuals rethink their investment," said Tony Payan, director of the Mexico Center at Rice University's Baker Institute in Houston. "We should expect continued flare-ups and local fights and a generalized environment of violence, crime and terror for the foreseeable future."

The current struggle is the fallout from the arrest and extradition to the U.S. of Joaquin "El Chapo" Guzman, who dominated Mexico's drug trade for years, as a younger generation of highly armed and brazen drug groups compete for control.

"They're young and with a lot more resources, and much more willing to use violence in any way they see fit," said Carlos Rodriguez Ulloa, a security consultant and member of a Mexico-based collective of international analysts known as Casede. "Removing criminal leaders without taking out their networks only causes more violence."

The Jalisco cartel, which pioneered attacks on civilians over the past few years and instigated several of the recent riots, is fighting the brash younger generation of El Chapo's Sinaloa cartel for control of the border area.

Guzman's son, Ovidio, was captured and then released by security forces in 2019 after his cartel shot up the city in Sinaloa where he was detained. The botched military operation taught narcos to turn their guns on civilians to get their way with authorities, Rodriguez Ulloa said.

Lopez Obrador has been defensive of his government's actions and denied any loss of governability over the riots. He sent more troops to violent states, and has said he doesn't see the military returning to its barracks soon, as he had originally promised.

Warring drug cartels have ravaged Mexico for over 15 years, at times turning their firepower on civilians such as lobbing grenades at a crowd in 2008 and setting a casino on fire that killed 52 in 2011. But the current wave of street attacks across several large cities appears to be unprecedented.

U.S. Ambassador to Mexico Ken Salazar warned this week that the violence would impact investment. Already in Tijuana, where last week's vehicle hijackings snarled traffic and temporarily blocked access to one of the world's busiest border crossings, a local newspaper reported that cross-border medical tourism shrank 90% immediately after the attacks.

Rice University's Payan said a company with operations across Mexico he consults for canceled expansion plans, citing security as a key factor.

"With insecurity, investments from the U.S. and other countries to Mexico cool off," Salazar said at a press conference in Mexico City on Thursday. "This runs contrary to what should be happening under the dream of the USMCA trade pact. There should be more investment, but insecurity is a big factor for companies."