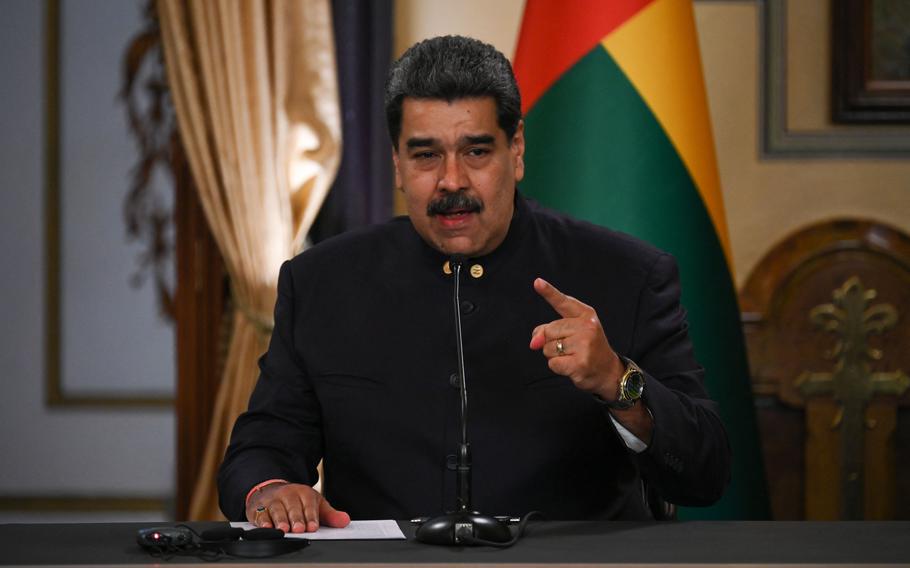 CARACAS, Venezuela (Tribune News Service) — Just three years ago, Venezuela was a nation on the verge of collapse.

Grocery shelves were bare, the national currency was nearly worthless, millions of people were fleeing the country, and a hostile U.S. government was exerting a “maximum pressure” strategy designed to oust its socialist president.

And though Venezuela has one of the world’s largest reserves of oil, motorists often waited 24 hours or more in lines stretching miles to fill up with gasoline that was nearly free.

Today, the sense of despair has receded ever so slightly as the government of President Nicolás Maduro has backed away from leftist orthodoxy and the war in Ukraine has boosted oil prices and given him more leverage on the international stage.

Few here would say times are good — not when 90% of Venezuelans remain mired in poverty, the minimum wage is about $15 a month and inflation recently topped 200%.

“My personal situation, while still difficult, has gotten better,” said Teybis Ramos, 29, who after a long stretch of unemployment recently found a job cleaning houses here in the capital.

She still relies on public assistance to help care for her two children, 9 and 11. But for the first time in years, she can afford to feed them meat and fish.

“I was able to buy everything my children needed for school,” she said. “And I can now give them breakfast before they leave in the morning.”

Behind the changes is a dramatic shift in economic policy. Starting in about 2019, Maduro slashed price controls, retreated from nationalizations of private firms and began allowing citizens to conduct business and shop using U.S. dollars. At the same time, rising oil prices have boosted revenue, despite U.S. sanctions. Oil production, though still far below its peaks in decades past, has increased about 27% in the last two years, with China believed to be the main buyer. 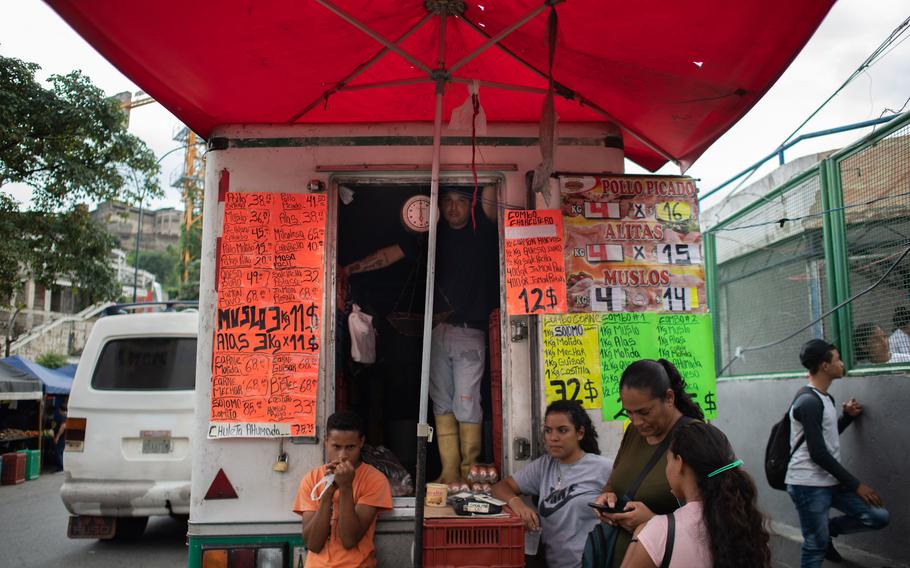 People sell meat in a street market at the Jose Felix Ribas community in the Petare neighborhood in Caracas on November 5, 2022. Venezuelans work at informal and small businesses in order to find financing alternatives. Loans represent only 1% of the GDP, due to government policies to curb inflation. Private companies to finance small entrepreneurs have emerged as an alternative to grow through micro-financing. (Federico Parra, AFP via Getty Images/TNS)

The International Monetary Fund is predicting a 6% growth rate in 2022 — the largest in 15 years.

It wasn’t long ago that Maduro’s days in power seemed numbered. In 2019, with protesters filling the streets, the United States branded him a dictator at the helm of a mafia state, broke off diplomatic relations and declared he was no longer the legitimate president, instead recognizing a young legislator, Juan Guaidó.

“The opposition is in complete disarray, divided,” said Francisco Rodríguez, a Venezuelan economist at the University of Denver. “The economy is growing. Right now, frankly, if there were free and fair elections, Maduro might win.”

Rising demand for oil as the world seeks a substitute for Russian supplies has further raised hopes for better times in this South American nation of 28 million, once among the richest in Latin America. Washington is contemplating an easing of crippling, Trump-era sanctions on Venezuela’s national oil company. U.S. regulators have already allowed a pair of European firms to export some Venezuelan crude.

“We are seeing what is a tentative but still clear reengagement on the part of the United States with Venezuela,” said Theodore Kahn, senior analyst in Bogota, Colombia, with Control Risks, a consultancy group. “Definitely the new geopolitical reality post-invasion of Ukraine is an important driver of this and creates urgency.”

Last week, a jovial Maduro — under U.S. indictment for alleged “narco-terrorism,” a charge he denies — was seen at a United Nations climate forum in Egypt shaking hands and chatting with John F. Kerry, the former secretary of state who serves as President Joe Biden’s special climate envoy. The State Department, which in 2020 offered a $15 million reward for information leading to the arrest of Maduro, said Kerry was “caught by surprise” in “an unplanned interaction.”

Republican lawmakers have warned the White House against cutting any deal with Maduro.

“The only thing the Biden admin should be discussing with Maduro is the time of his resignation,” Sen. Rick Scott, R-Fla., tweeted in March after Washington dispatched a high-level delegation to meet with the Venezuelan president.

Talks between the Maduro administration and the fragmented Venezuelan opposition — facilitated by the government of Norway — are expected to resume within weeks in Mexico. The U.S.-backed opposition is seeking guarantees that national elections scheduled for 2024 will be fair and democratic.

Given Maduro’s newfound strength, many observers suggested that he had little incentive to agree to electoral reforms.

Also emboldening Maduro is the election of left-leaning governments this year in neighboring Colombia and Brazil. In August, three years after cutting diplomatic relations, Colombia and Venezuela restored them.

Such developments may provide a boost for Maduro, analysts said, but do little to revive a country that has lost up to 80% of its economic capacity during the last decade.

“It is predictable (Maduro) would calculate that the international climate gives him more room to maneuver,” said Patrick Duddy, a former U.S. ambassador to Caracas who now heads Duke University’s Center for Latin American and Caribbean Studies. “But the deep-seated problems are not going away.”

Prospects for a broad recovery are dim “without addressing the deeply corrupt and authoritarian current government,” said Geoff Ramsey, Venezuela director for the Washington Office on Latin America, an advocacy group.

“Dollarization has provided relief for some, but the reality is that Venezuela is still in the middle of a deep humanitarian emergency,” he said.

One big problem is that most Venezuelans earn their salaries in bolivares, the national currency, and don’t have easy access to dollars.

“The mechanic, the plumber, the electrician — they all want dollars,” said Nataly Márquez, 45, a financial adviser in Caracas. “For those of us in the middle class, who don’t receive government aid, daily life is very difficult. … We can’t even pay to fix a faucet in our bathroom right now.”

The overriding issue is inflation — even if it’s down from an estimated peak of more than 1 million percent in 2019.

“Inflation … evaporates, practically burns, all of one’s earnings,” said Alejandra Rodríguez, 43, a single mother and office administrator. “I’m always a month behind on my bills. My salary is simply not enough for basic expenses.”

Even if sanctions are completely lifted, experts said, it could take years to repair the country’s dilapidated oil infrastructure. Venezuela, a founding member of the Organization of Petroleum Exporting Countries, or OPEC, is currently pumping about 700,000 barrels a day — down from 2.8 million as recently as 2013.

Thwarted by U.S. sanctions, Venezuela has turned to Iran — also hard hit by sanctions — to prop up its oil industry. Along with technical assistance, refinery equipment and tankers, Tehran has provided gasoline and ultra-light crude to help raise Venezuela’s heavy oil to export grade.

Gas is no longer free. These days, motorists have a choice: Purchase up to 32 gallons a month for roughly $0.15 a gallon at subsidized stations, where there may be lines, or buy unlimited amounts of gas for about $1.90 a gallon at dollar stations, without delays.

“This works much better for me — I don’t have to wait in line,” said Alfredo Mendoza, 51, a gardener and father of three who was buying gas for his red Ford pickup at a dollar station in the capital on a recent morning. “If you have the greenbacks, you can fill up your tank every time you want.”