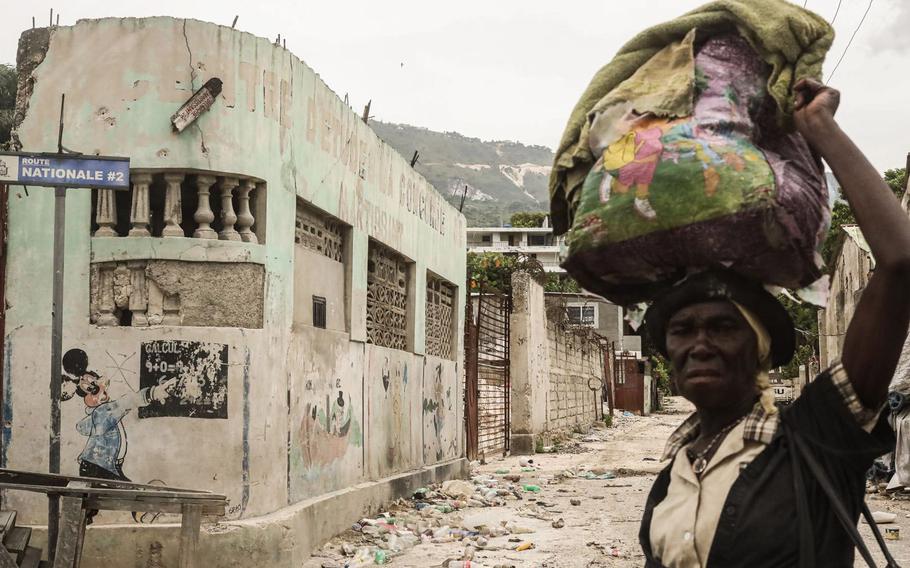 ​​​A street littered with trash in the Martissant neighborhood, south of Port-au-Prince. (Jonathan Alpeyrie/Bloomberg )

The buildings are abandoned, the cars burned out, the trash piled high into barricades. To the south is the area devastated by last month's earthquake, to the north is the capital Port-au-Prince where in July the president was murdered in his home.

The misery of Haiti, facing natural disaster on top of political crisis, has been amply documented. But to grasp the challenge, look in the once-teeming neighborhood of Martissant, now hollowed-out, abandoned and covered in gray dust. It's a choke point in the hands of rival gangs who've driven thousands from their homes, closed a major hospital, shut down fuel distribution routes and barred farmers from the markets.

Nothing moves without the gangs' consent.

"In Haiti, more than a failing state we have a non-existent state," said Joseph Harold Pierre, an economist.

Elections are being planned to replace assassinated President Jovenel Moise and humanitarian aid is being rushed to those hit by the earthquake and subsequent tropical storm. But it's clear there will be no solution in Haiti until the government can tame the gangs.

As Mathias Pierre, minister of elections until recently, put it, the armed groups are essentially terrorist organizations that have taken over entire neighborhoods and are using the local populations as human shields.

Haiti is the poorest and the most unequal nation in the Americas. Since 2018, gross domestic product has fallen 18% to $13.4 billion, according to the World Bank. Per-capita GDP is just $1,176 -- its lowest level since 2010 -- and on par with Cambodia and Kenya. Nearly 60% of the population lives in poverty, nearly half the population, or 4.4 million, need immediate food assistance and 1.2 million suffer from extreme hunger, according to the World Food Program.

Julien Bartoletti, the head of Doctors without Borders in Haiti, suggests thinking about Haiti as a war zone. His organization was forced to shutter its 15-year-old hospital in Martissant this summer after it came under gang gunfire. At least three staff members have been kidnapped, one murdered and dozens are among the 20,000 Haitians who've fled due to gang threat."You have front lines, with gangs against gangs," he said. "In Martissant, you have an area with no people and destroyed houses. It's empty."

Pierre, the economist, said that between 2016 and 2020 gang violence likely cost the country $4.2 billion per year, or 30% of its gross domestic product, as it scared off foreign investors and caused fuel shortages that paralyzed parts of the country and sent inflation soaring. 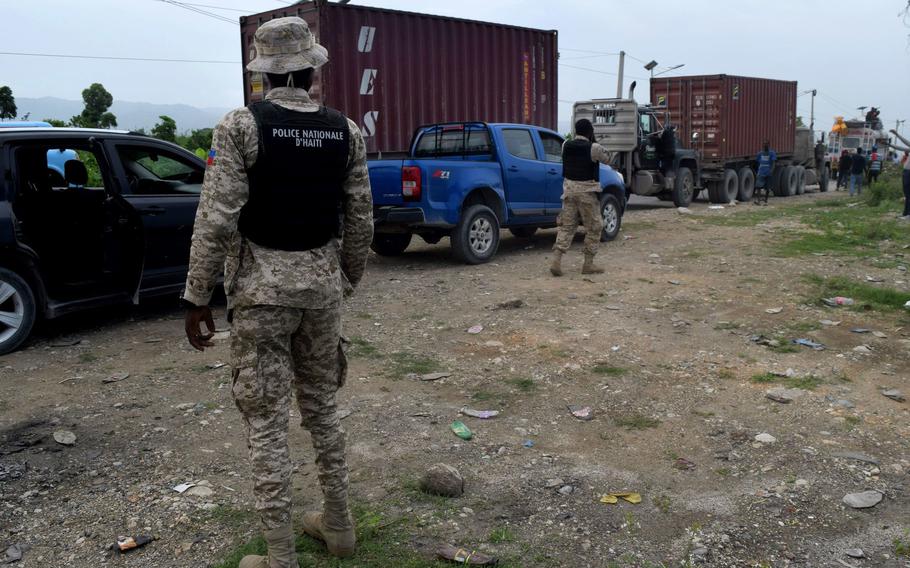 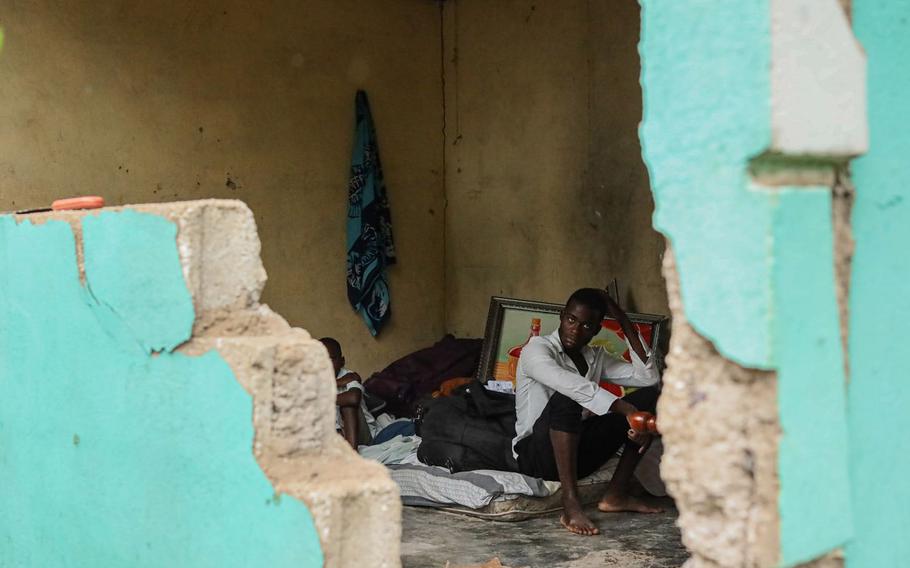 A family remains in a home damaged from the earthquake in Saint-Louis-du-Sud. (Jonathan Alpeyrie/Bloomberg) 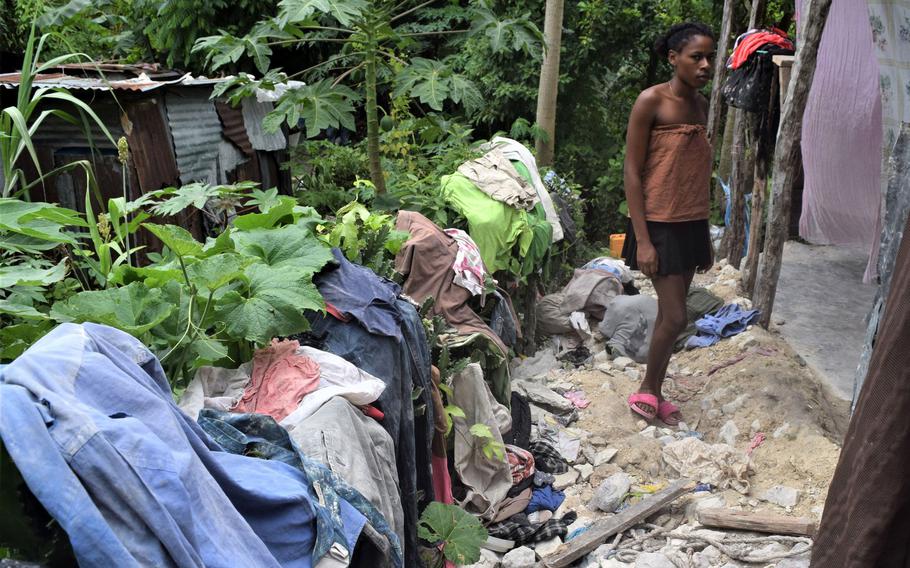 Dyeumen Lacombe stands outside her home damaged by an Aug. 14, 2021 earthquake in southern Haiti. (Jim Wyss/Bloomberg) 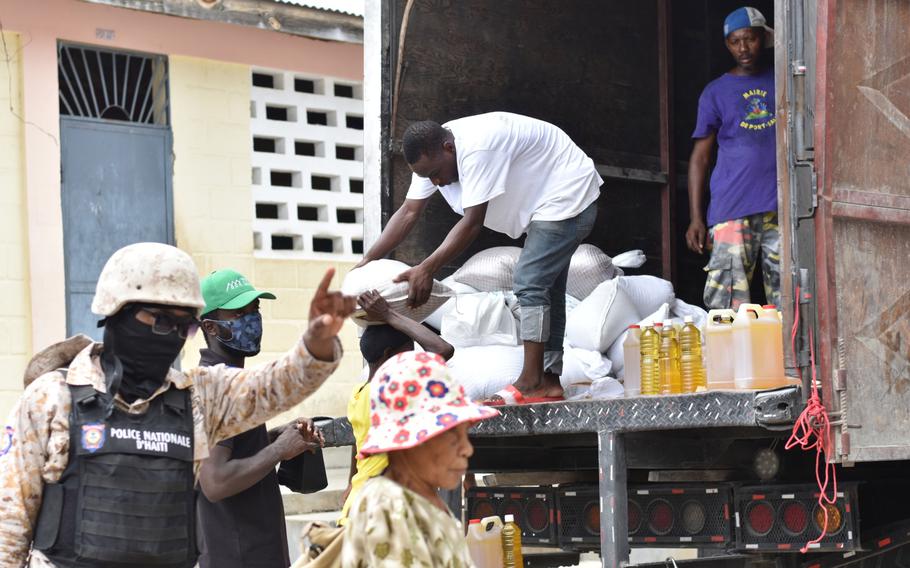 According to the National Human Rights Defense Network, there are more than 90 gangs in the country, likely with thousands of members and far more powerful than the police. Rape and kidnapping are common. Pierre Esperance, the group's executive director, said gangs, a fixture since the 1990s, grew powerful and emboldened under successive administrations that undermined state controls.

"Haiti has regressed in terms of the rule of law, because all key state institutions were destroyed under the Jovenel Moise administration," he said. "The police, the judicial system, all of them. We have no functioning institutions."Since 2018 the courts have operated about four months out of the year, he said, and impunity is rampant. He also said international partners provide aid but do little to fight corruption.

The government knows it's limitations. Prime Minister Ariel Henry, who has been on the job less than three months, put it gently when he told the Organization of American States that criminal violence is one of the forces driving the "chronic instability that has bedeviled us."

Now "gangs are the biggest employers," he said in an interview. "We need to create jobs, while we are putting the gangs out of a job."

One day last week, Sinea Fritsner, 28, crossed himself, tucked his yellow Mack cargo truck behind an unmarked police car, and gunned the engine through a desolate mile of devastation in Martissant.

For months, the gangs had simply kept the road shut. It was reopened only after they declared a kind of humanitarian truce so aid could get from Port-au-Prince to the southwest.

"Just a few days ago, we couldn't go through there at all," said Fritsner, who's driving for Food for the Poor, a global aid organization.

While the United Nations and the U.S. have been organizing air and sea shipments to southern Haiti, the bulk of the cargo needs to be moved overland.

Bruno Lemarquis, the U.N. Humanitarian Coordinator in Haiti, said his work depended on the willingness of the gangs to allow it.

"We really need this truce to hold," he said. "In order to get relief to the south, we need these roads to be open."

Food For the Poor has been working in Haiti for 35 years through natural disasters and political turmoil. The recent gang violence has been unprecedented, said President Ed Raine. For almost four months, all land routes to the south were virtually choked off, halting food delivery to more than 400 distribution centers and exacerbating an already critical hunger crisis."We have multiple examples of drivers being shot at and trucks being stopped," Raine said. "On a normal day this is a hard job -- but then you throw gangs into the equation."

Even after the mid-August truce, the organization had five of its trucks looted. Now it's only traveling under police escort.Even so, the peace feels tenuous, Raine said. "How long will the ceasefire last? We don't know."Simon Desras, Haiti's Minister of Planning and External Cooperation and a former minister of defense, said in an interview that keeping roads open is a national priority.

Asked what will happen if the ceasefire ends, he replied, "We have to take responsibility to act and eradicate this situation."

What that means is far from clear. Haiti's gangs aren't new but rarely have they been so strong.

Pierre, the former elections minister, says that, for years, sectors of the government, elements of the opposition and members of the private sector have been financing and "working in complicity" with the gangs. "That's what keeps the gangs alive," he said. "And that's why it's so hard to control them. You have to follow the money."The groups will undoubtedly play a role in upcoming elections, as about 60% of the electorate is currently living in gang-controlled areas.

One of the most notorious gang leaders, Jimmy "Barbecue" Cherizier, runs the G9 gang alliance in Delmas neighborhood. A former policeman, he still has close ties to law enforcement. It was Cherizier who announced the ceasefire in Martissant. On Saturday, he said his organization -- an army of well armed thugs -- was going to donate food and school supplies to the hard-hit south.

Wilhelm Lemke, the president of the Haitian Association of Industries, said the gang problem is one of the roots of Haiti's crisis -- making the once proud nation the hemisphere's basket case, desperately poor and and unequal despite being less than 700 miles from Florida.

"Our geographical position, our food, our art, our hard work ethic, our resilience -- we have so much going for us," he said. "But we are missing the boat to such a high level that it's tragic. And at the end of the day you have 12 million people in dire misery who are losing hope."

Prime Minister Henry hasn't outlined a plan yet to deal with the gangs, but he has acknowledged how hard the job will be. "The crisis we are living -- I cannot solve it alone," he wrote this week.

Even before the earthquake destroyed her home in southern Haiti, Dyeumen Lacombe, a 23-year-old farmer, said she and her village were suffering. Unable to get their crops of sweet potatoes and corn to the markets in the capital due to the Martissant blockade, they were forced to sell it at steep discounts along the side of the road.

Lacombe said the poverty, the earthquake, the pandemic, the storms, the murder of her president and the gang violence all seemed surreal.

"All we can do is smile," she said stone faced. "This is Haiti now."