‘Arlington International’: The USS Arlington is the staging area for aid supplies to ravaged Haiti 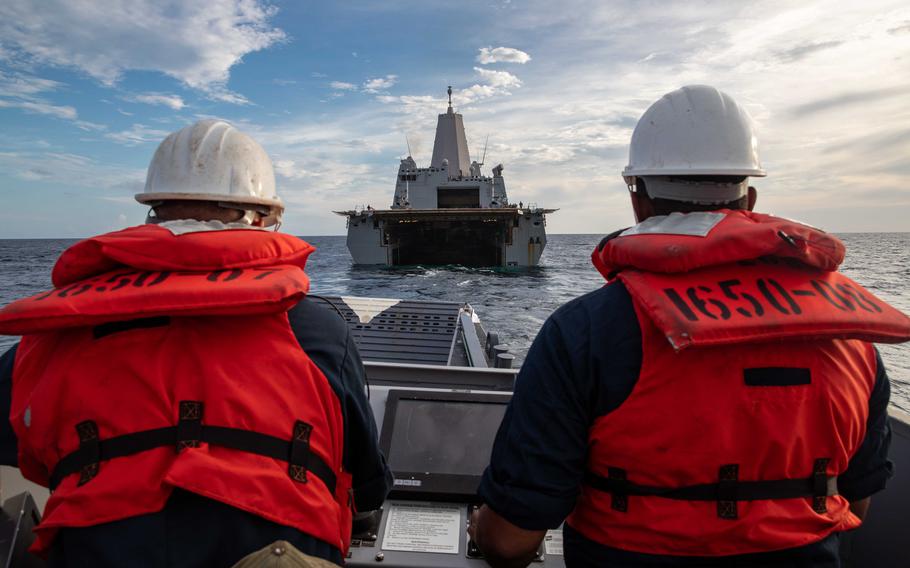 NORFOLK, Va. (Tribune News Service) — The USS Arlington was in such a hurry to get to earthquake and storm-ravaged Haiti that it didn’t even wait in Norfolk to board all its Marine Corps contingent — many of them came out in landing craft and boarded the ship while it was off the North Carolina shore.

The Norfolk, Va.-based ship is the base from which U.S. military helicopters have run hundreds of flights, carrying medicine, food and other desperately needed supplies.

Stationed about 3 miles offshore, Arlington’s sailors and Marines are keeping some 16 helicopters stocked and refueled as they shuttle between the ship, the Port au Prince airport — where aid supplies are coming in — and the towns and countryside at the western end of Haiti’s long southern peninsula.

The 7.2 magnitude earthquake destroyed hundreds of thousands of homes and rendered most roads on the southern peninsula impassable on Aug. 14. The peninsula was hammered a few days later by tropical storm Grace.

The crew, just back in Norfolk from three weeks at sea, had scrambled to clear the ship’s usual stores and stock up on relief supplies, work that normally takes days, and were out to sea after just a day at home.

“With less than 12 hours notice, my Marines and sailors embarked on the USS Arlington in support of USAID’s efforts in Haiti,” said Maj. Mark Paige, executive officer of 1st Battalion, 6th Marine Regiment. He embarked on the Arlington when sailors drove a landing craft directly onto the ship’s well deck.

In addition to those Marines, Arlington welcomed pilots, air crew and mechanics from Helicopter Sea Combat Squadron 26 along with two of the squadron’s MH-60 Seahawk helicopters. It also has sailors from Little Creek’s Beachmasters Unit 2 and Assault Craft Unit 2 and one of their landing craft, Fleet Surgical Team 2 and staff from Destroyer Squadron 40 and amphibious and aviation planners on board.

The effort includes Army and Air Force aircraft and personnel, as well as two other Navy ships and four Coast Guard cutters. In addition to the 16 helicopters ferrying supplies, the joint task force for Haiti is operating eight transport planes.

In just the first three days of operation, they’ve rescued or helped more than 435 people, flew more than 360 missions and transported more than 160,000 pounds of supplies.

Kellum expects the material the Arlington brought will run out next week, so they plan to replenish at sea — the ship will be alongside another Navy ship, just 180 to 200 feet apart, as thousands of tons of f supplies are moved from one to the other.