International aid begins to arrive in Haiti, nearly a week after earthquake 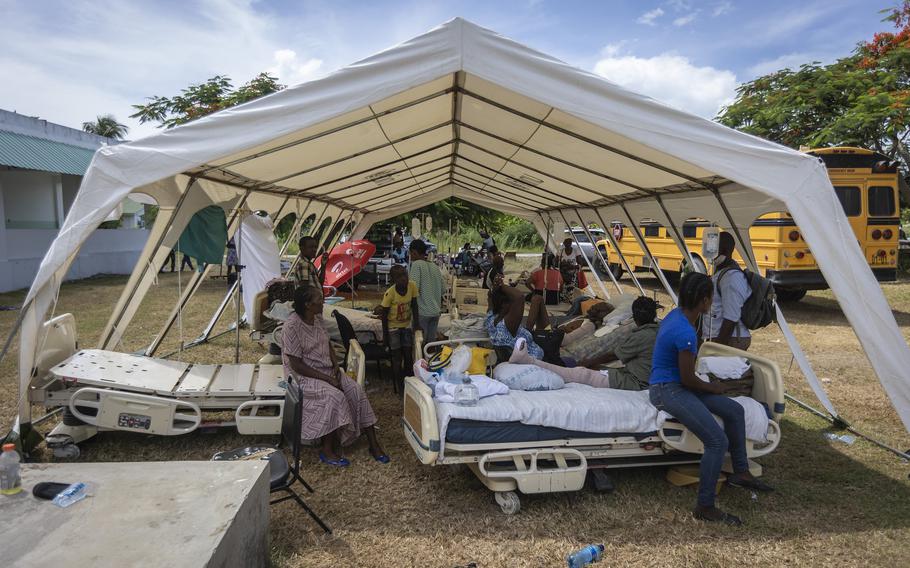 Patients of OFATMA Hospital in Les Cayes, Haiti, are being cared for in tents on Monday, Aug. 16, 2021. Though it did not collapse, the hospital's walls and floor cracked during the earthquake and no one wants to go back inside. (Jose A. Iglesias, el Nuevo Herald/TNS)

LES CAYES, Haiti (Tribune News Service) — International aid began to finally pour into Haiti nearly a week since the devastating 7.2-magnitude earthquake, despite bridge and road failures that hampered efforts to reach some of the hardest-hit and remote towns.

Early Friday, there was no road access to the southwestern city of Jérémie, as pictures circulated showing damage to the Dumarsais Estimé bridge, one of the main access routes into the city. The local public works department was working early afternoon to secure an alternate route into Jérémie.

The airport in Les Cayes, near the earthquake’s epicenter, had become the busy landing ground for relief arriving into Haiti as injured people were simultaneously airlifted to hospitals in the capital of Port-au-Prince. Two U.S. military aircrafts and several U.S. Coast Guard helicopters hovered over Les Cayes, arriving with provisions to the airport.

One of the helicopters, loaned to former Haitian Sen. Richard Herve Fourcand, was on route to Pic de Macaya, a mountainous region in the rural outskirts of the city, to airlift an earthquake victim, one of many injured when the tremors brought down parts of the mountain. Almost a week since the initial tremor, victims were still in need of immediate medical care in rural and remote areas. Fourcand and others laid injured and sick residents on their laps to transport them back to Les Cayes.

Other international organizations — including Swiss Humanitarian Aid, Medic Corps, Samaritan’s Purse and the United Nation’s World Food Program and International Organization for Migration — were on the ground assisting earthquake victims. Aid workers dragged suitcases and boxes packed with supplies and loaded them onto vehicles.

World Central Kitchen took a helicopter to survey two of their sites nearby where they have a team of about 40 people providing hot meals with local vegetables and ingredients. Hospital Albert Schweitzer, from the Central Plateau region of Haiti, had sent a team to deal with the response’s logistics.

Three army ships from the Dominican Republic were also stationed on the sea of Jeremie to aid earthquake victims.

The hectic day at Les Cayes was also marked by preparations to receive former Haitian President Michel Martelly, who planned to arrive Friday to survey the damage caused by Saturday’s quake and powerful aftershocks that have so far killed 2,189 people and injured more than 12,200 others. An estimated 136,800 families are homeless and nearly 700,000 people are in need of urgent humanitarian assistance.

The U.N.’S Deputy Secretary-General Amina Mohammed also arrived in Les Cayes on Friday morning, one of the most notable international figures to visit Haiti so far since the disaster. She was accompanied by Helen La Lime, U.N.’s special representative in Haiti, U.N. Secretary-General Antonio Guterres and Director General of Haiti’s Health Ministry Dr. Laure Adrien.

“When you hear the figures of the destruction of schools, people’s homes, the numbers that have died ... it’s tragic,” Mohammed told the Miami Herald.

Meanwhile, in South Florida, the aid organization Hope for Haiti told the Herald they issued an “emergency appeal” to raise $5 million to fund earthquake relief and recovery efforts, in partnership with the Bob & Renee Parsons Foundations, which kicked off the effort with a $1 million gift.

The organization plans to fund medical supplies to support health partners on the ground, provide medicine and health consultations, rubble removal and rehabilitation of homes and other damaged buildings, water filtration systems and micro-grants aimed to support education and businesses.

Haiti National Police said Thursday that it was reinforcing the road to Martissant in Port-au-Prince with specialized police units to protect humanitarian aid passing along the road. Police spokesman Marie-Michelle Verrier said anyone seeking to take aid to quake victims should check in with police first.

The announcement was made after Haitian artist Widler Octavius, known as Wid, complained to the Miami Herald on Wednesday that the police commissioner assigned to Les Cayes had refused to provide him with a police escort to the hospital in nearby Port Salut where he was donating cooked meals and toiletries kits to quake victims. The police’s refusal left him at the mercy of bandits, he said, who attacked his group as they headed to the beachfront community.

“The police has taken all the necessary steps to reinforce its presence along the Martissant route,” Verrier said during a press conference. “There are still threats along this road ... Everyone who has donations to take to the Great South, we will remind you again that the police are here to accompany you.”

Police said Thursday that some villagers along the route leading to the quake-struck regions had barricaded roads under the pretext that they needed assistance also. She also said that 22 prisoners had escaped from the Les Cayes jail after the quake.