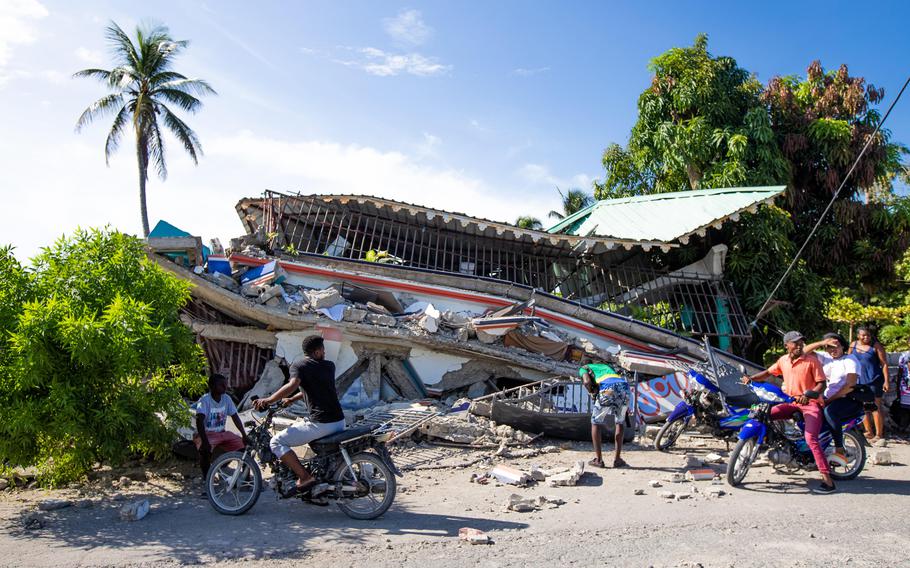 (Tribune News Service) — The U.S. military's Southern Command is sending eight helicopters to assist in the disaster relief effort in Haiti after an earthquake devastated a remote region of the country, making access difficult.

The deployment is double what Southcom detailed on Sunday and includes three CH-47 Chinooks and five UH-60 Black Hawks.

The U.S. Agency for International Development (USAID) is leading the American effort to deliver supplies to the Caribbean nation. But officials say the relief mission has been slowed because the 7.2 magnitude earthquake hit the country's southwestern peninsula, which is only accessible by single-lane roads.

Those roads are unsafe due to the turbulent security situation that has unfolded in Haiti since the assassination of its president, Jovenel Moïse, last month. The roads have also been battered by recent flooding, mudslides and the earthquake.

And a storm that will reach the island within hours is expected to make the situation worse.

All eight helicopters are from Joint Task Force-Bravo based in Honduras, a Southern Command spokesman said.

"Some are currently staging in Jamaica, and the rest are en route to Jamaica," the spokesman told McClatchy. "If weather conditions permit, some of the helicopters may arrive as early as this evening."

"The current mission focus for Joint Task Force-Haiti is to conduct life-saving and assessment support to the ongoing foreign disaster assistance effort led by the U.S. Agency for International Development," the spokesman said.

Southern Command would not comment on whether U.S. troops would be deployed to secure the country's roads. But the situation may demand it, experts say.

"I could envision logistical support on the ground to be able to ferry whatever it is that's needed to isolated areas," said Georges Fauriol, an expert on Haiti and senior associate at the Center for Strategic and International Studies. "Road traffic in Haiti has actually become rather dangerous, so I could envision a limited deployment in that context."

Saturday's earthquake resulted in the deaths of at least 1,300 people, according to the Haitian government.

A USAID official said that the death toll could rise as additional rescue teams reach the disaster zone.

While the White House has been consumed by the frenzied withdrawal from Afghanistan, National Security Council officials have been holding daily meetings on the crisis in Haiti, administration officials said.