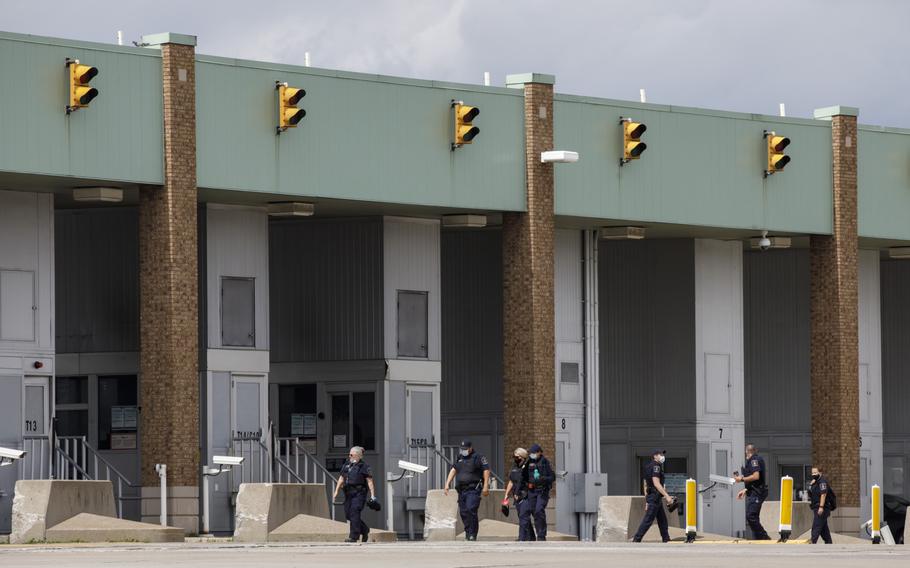 Border guards walk to their booths at the Ambassador Bridge in Windsor, Ontario, Canada, on May 26, 2021. (Cole Burston/Bloomberg)

The Canadian government will loosen COVID-19 travel restrictions for fully vaccinated people amid warnings that a return to a completely open border will take awhile longer.

Canadian citizens and residents who’ve received two shots will be exempt from a 14-day quarantine on arrival to the country, Prime Minister Justin Trudeau’s government said in a statement Monday. Travelers will still need to show they’ve tested negative for COVID-19 before they cross into Canada and take a second test at the border. Those arriving by air, who are currently expected to do the first three days of their quarantine in a hotel, will be exempt from that requirement.

The changes — effective July 5 — are a first, incremental step toward easing restrictions as the government faces mounting impatience to permit more freedom of movement between the U.S. and Canada. A fuller reopening that allows tourist travel to resume won’t happen until 75% of Canadians are fully vaccinated, Trudeau’s border chief said on Sunday.

The government’s cautious approach drew condemnation from the head of the global airline lobby group. “I don’t understand Canada,” Willie Walsh, CEO of the International Air Transport Association, said Monday during an interview in Paris.

“This isn’t only about holidays, these are business decisions. Future decisions will be made on people’s experiences and my experience of Canada is very poor,” Walsh said. IATA is based in Montreal, and he said he can’t visit its headquarters.

The U.S.-Canada border has been closed to most travel since March 2020. On Friday, the governments extended restrictions on non-essential trips until at least July 21.

“We haven’t reached the finish line, and the finish line is when a significant majority of Canadians, approximately 75%, are fully vaccinated,” Public Safety Minister Bill Blair told the Canadian Broadcasting on Sunday. At present, less than a fifth of Canadians have received two shots, according to data compiled by CTV News.

The border restrictions have kept families apart, blocked tourists and students, and hampered the world’s largest bilateral trading relationship. While trucks and trains continued to move goods, Canada’s tourism and travel-related businesses lost an estimated $16 billion (CA$20 billion) in revenue last year, according to one estimate.

The new measures announced Monday will primarily help Canadians living in the U.S. come home without the added costs and burden associated with the full quarantine. It could also expedite entry for new immigrants and non-permanent residents like international students.

Travelers will still need to quarantine until they receive the results of the second COVID-19 test. The new rules don’t apply to tourists, and non-residents and partially vaccinated Canadians who come into the country still need to do the full quarantine.

“The fact that it is easier for vaccinated Canadians to fly to Paris than it is to drive to Buffalo demonstrates how illogical the present policy is,” Perrin Beatty, chief executive officer of the Canadian Chamber of Commerce, said in an emailed statement. “It is time for common sense, guided by science, to dictate a well-considered reopening plan.”

Airlines, tour operators and other businesses on both sides of the border have been pleading for a more comprehensive reopening plan, with the vital summer season about to begin, and Canada’s go-slow approach is causing frustration. Blair’s announcement Friday that Canada would extend most border restrictions was met with some unusually blunt language from Brian Higgins, a New York Congressman who represents a border district.

Canada prioritized giving first doses to as many people as possible before moving on to second doses amid a shortage in vaccine supplies. As a result, some 66% of Canadians have received one shot, but only 18% have had two, the CTV data show. By contrast, about 45% of Americans have had two doses, according to the Bloomberg Vaccine Tracker.

Despite its cautious stance, Trudeau’s government had approved a travel exemption for National Hockey League teams earlier this month for the final rounds of championship playoffs.

But last week, the head coach of the Montreal Canadiens tested positive in Las Vegas after traveling while only partially vaccinated, according to a statement from the NHL.

Canada is expecting the delivery of 68 million doses by the end of July that should be enough to fully vaccinate the eligible population. Asked if that might allow Canada to reopen the border by the end of August, Blair said while he didn’t want to get ahead of the country’s public health agency, he was hopeful.

“Clearly, as those vaccines arrive and as Canadians continue to get in those lines and get vaccines into their arms, we’re really optimistic that we can meet that threshold of 75%,” he said.