Youngest adults are least likely to be vaccinated, and their interest in shots is declining, CDC finds

The nation’s youngest adults remain the least likely to be vaccinated against the coronavirus - and their weekly rates of vaccination are declining, according to federal research released Monday.

The Centers for Disease Control and Prevention analyzed adult vaccination rates by age through May 22, finding 80% of adults older than 65 had been immunized compared with just 38.3% of 18- to 29-year-olds.

If vaccination rates continue at low levels through August, the report said, “coverage among young adults will not reach the coverage level of older adults.”

The weekly shot rates for younger adults never matched the 8.2% peak of people older than 65, according to the report.

“The way that the pandemic has been framed, essentially what we heard at the beginning, is that if you were older, you’re more likely to face severe consequences related to covid,” said Rupali J. Limaye, a Johns Hopkins University researcher who studies vaccine use. “I think a lot of younger people were like, ‘It’s okay if I get it. I’m going to be able to survive it.’ “

Federal researchers found that, across all age groups, people living in counties with higher percentages of poverty, uninsured residents, and a lack of computer and Internet access were less likely to be vaccinated.

The CDC also found in a separate study that 18- to 39-year-olds were less likely to identify religious organizations, social media or employers as trusted sources of information. The most trusted sources: the CDC and primary-care providers.

Researchers surveyed people under 40 about their intention to get vaccinated. Nearly half of the 2,726 people surveyed said they were unsure or did not plan on getting a coronavirus vaccine, with 18- to 24-year-olds being the least likely to have been vaccinated and most likely to be unsure about getting a shot.

That study, conducted from March to May, found education, income and geography were associated with vaccine acceptance and intention. People with at least a bachelor’s degree who live in higher-income households in metropolitan areas were most likely to be vaccinated.

Among adults under 40, Black people who earned lower incomes, attained less education, were uninsured and lived outside of metropolitan areas had the lowest vaccination rates and were less likely to plan on getting vaccinated, the report found.

Physicians and public health experts said views on the trustworthiness of the medical system are hugely influential in Black people’s decision-making on the coronavirus vaccine. Historic and ongoing discrimination related to the health-care system - including doctors who are less likely to acknowledge Black people’s pain, the maternal mortality crisis facing Black mothers and the quality of hospitals that care for Black people - sows doubt about the vaccine.

The Commonwealth Fund partnered with the African American Research Collaborative to conduct a 12,000-person survey to better understand why people from the Black, Latino, Native American, Asian American and Pacific Islander communities might be reluctant to get the coronavirus vaccine and to ask about access issues and incentives that would encourage people to get a shot.

More than 40% of Native Americans, African Americans and Latinos who said they were hesitant about the vaccine also experienced discrimination by the health system, including denial of specialist referrals, the opportunity to speak with a physician, or care in their preferred language.

Engendering trust is the responsibility of the health system, from government policies to physicians’ practices, Zephyrin said. Part of that trust-building is creating the opportunity for people to have their questions answered. It is something she makes a point of doing while treating patients as an obstetrician/gynecologist, by asking if they have thought about getting the vaccine.

“I think of vaccine confidence as a journey,” Zephyrin said. “It may take multiple conversations to get people there.”

The poll also found that the doctor’s office was the preferred place to receive a coronavirus vaccine across all racial and ethnic groups.

According to the federal reports, concerns about the safety and effectiveness of the vaccines were the primary concerns, but people did not necessarily know where to go for answers.

A significant share of people under 40 who said they were not sure about being vaccinated or had no intention of getting a shot indicated they lacked information about the vaccine and where to get it.

“What that does point to, in my opinion, is they’re being bombarded with misinformation and disinformation,” Limaye said. “And it’s hard to really disentangle and figure out what is real and what is not real.”

Henry Fernandez - president of the African American Research Collaborative, which examines the beliefs, attitudes and intentions of the Black community - said changing rules about vaccine eligibility contributed to the knowledge gap.

The eligibility requirements, including age, health conditions or job types, varied by state until all adults became entitled to a shot. Mass vaccination sites have been shut down and replaced in some communities by smaller, pop-up clinics.

“People that were not eligible to get vaccinated from the very beginning and may have only gotten that eligibility in the last 60 days are now saying, ‘Well, I’m not exactly sure. How do I get vaccinated?’ “ Fernandez said. “Am I eligible?”

Everyone over age 12 is now eligible, and Fernandez said now is the time to begin thinking about how to tailor public health messaging that resonates with younger unvaccinated adults to help get them to “yes.”

According to the CDC, about 40% of younger unvaccinated adults said they believed others needed a vaccine more than they did. Those leaning toward getting a shot cited wanting to help others and a desire to resume their social lives as motivating factors.

“We really need to center messages that are about others,” Fernandez said. “This idea that we care about each other in a country where we spend so much time talking about what divides us . . . that we can all take care of each other, these messages seem to really work quite well with younger Americans who are unvaccinated.”

The Washington Post’s Scott Clement and Emily Guskin contributed to this report. 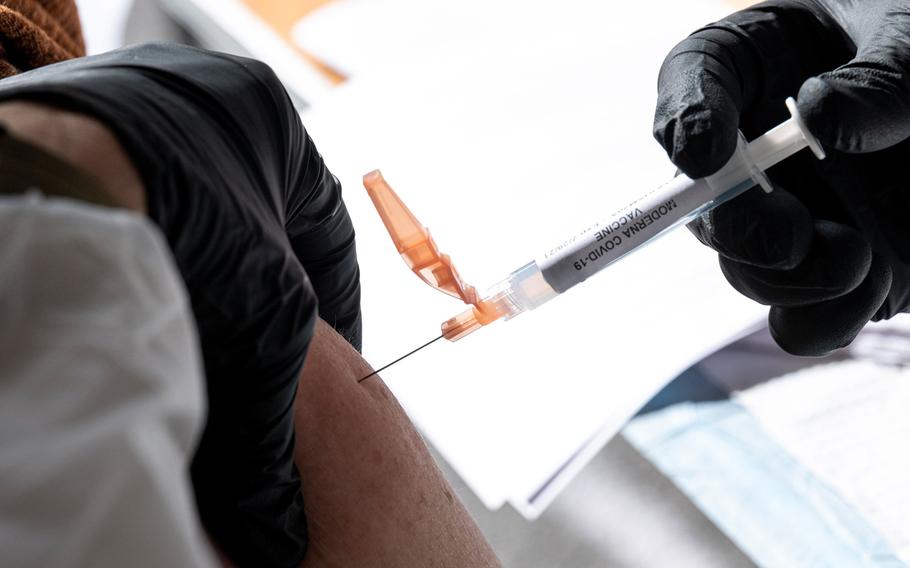 A healthcare worker administers a dose of the Moderna COVID-19 vaccine at a walk up vaccination site in San Francisco on Feb. 3, 2021. (David Paul Morris/Bloomberg)