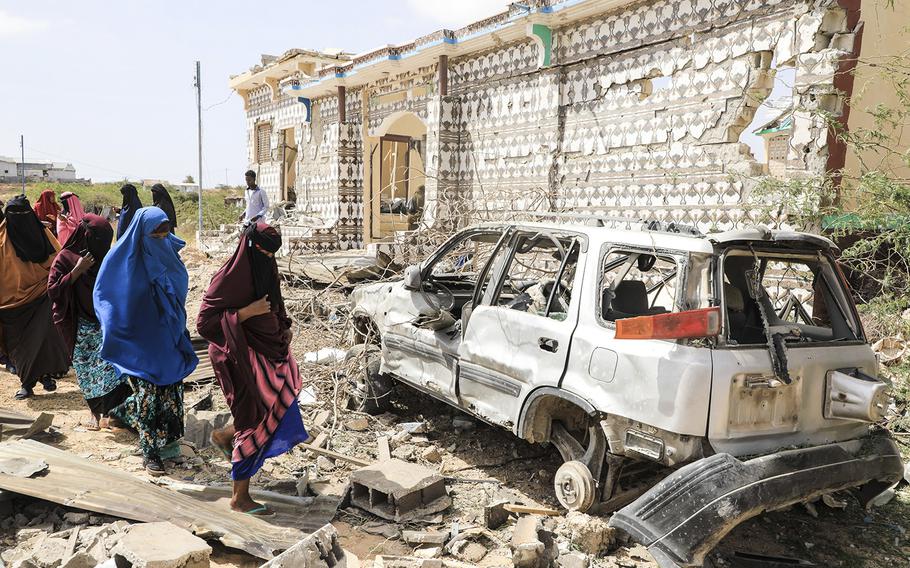 Women walk next to a destroyed house and the wreckage of a car following an explosion on the outskirts of Mogadishu, Somali, on Feb. 16, 2022. According to reports on Saturday, Aug. 20, at least 20 were killed in clashes between militants and government forces. (HASSAN ALI ELMI/AFP via Getty Images/TNS)

(Tribune News Service) — Somalia's security forces battled militant fighters for a second consecutive night in Mogadishu's Hayat hotel, the largest siege in the country since Hassan Sheikh Mohamud was elected president in May.

At least 20 people have died since militants stormed the hotel in downtown Mogadishu late Friday. Hayat hotel manager Ismail Abdi said security forces were pounding the building with weapons Saturday, in an effort to contain remaining members of the Islamic extremist group al-Shabab, which has claimed responsibility for the attack.

The attack started with explosions outside the hotel before gunmen entered, the Associated Press reported. About 40 people were wounded, some critically, and admitted to the hospital.

The government has provided no official statement on the number of fatalities, but Mohamed Ibrahim Moalimuu, a member of Somalia's federal parliament, told Bloomberg that 11 members of his immediate family died from the attack. Abdulkadir Mohamud, owner of the Hayat hotel, said nine other people, including two of his brothers, died in the attack.

The attack was condemned Saturday by the U.S. embassy in Mogadishu. In a statement, United Nations Secretary General Antonio Guterres repeated the UN's solidarity with Somalia in fighting terrorism.

Somalia is struggling for stability after decades of civil war and an insurgency led by al-Qaida-linked al-Shabab, which has been trying to topple the government since 2006.

On Aug. 14 the U.S. killed 13 al-Shabab operatives in an air strike near Teedaan, Somalia, according to a statement by the U.S. Africa Command issued on Wednesday. It was the third strike since June.

President Joe Biden in May ordered the return of U.S. troops to Somalia to help suppress al-Shabab after they were withdrawn by President Donald Trump.