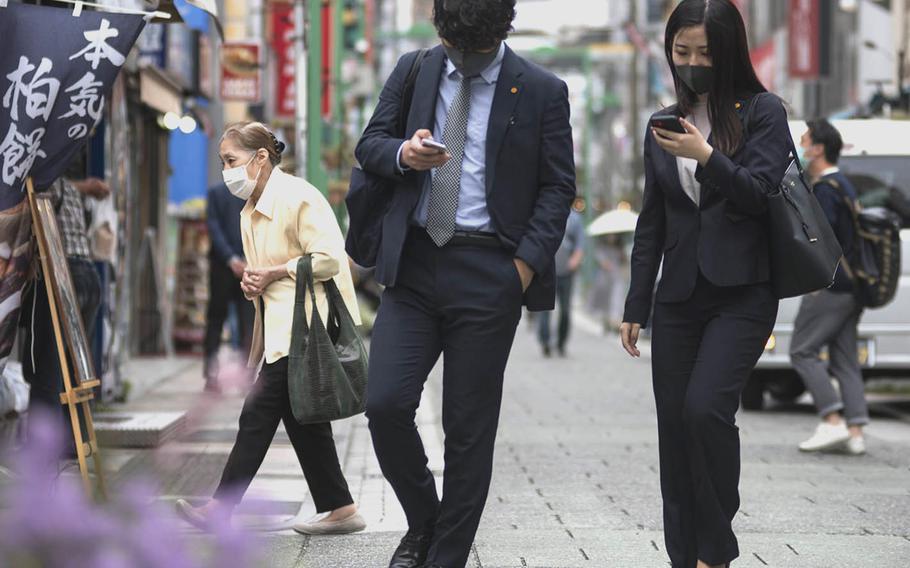 Most urban dwellers in Japan, including these pedestrians in Yokohama on May 12, 2021, wear masks as protection against the coronavirus. (Akifumi Ishikawa/Stars and Stripes)

Okinawa, the southernmost prefecture, said 207 people had tested positive for COVID-19, the coronavirus respiratory disease, on Friday, surpassing its previous high, 203, set Wednesday, according to public broadcaster NHK and prefectural data. Also, a Naha City woman in her 90s died, bringing the pandemic death toll there to 148, according to NHK.

The Japanese government on Sunday may add Okinawa to the nine prefectures, including Tokyo and Osaka, where a state of emergency is already in place, Kyodo News reported Friday. Emergency restrictions include bans on alcohol sales in restaurants, reduced hours for some businesses and, in Okinawa’s case, would urge tourists to refrain from visiting the island prefecture.

Okinawa is home to tens of thousands of U.S. service members, Defense Department employees, contractors and their families.

Japan has lagged other developed nations in getting is population vaccinated. It requires a domestic clinical trial of new vaccines, which can take up to a year and has slowed the nation’s progress on inoculations during the pandemic, according to an April 29 report in Nikkei Asia. One vaccine, the two-shot Pfizer-BioNTech, has been available, thus far, and Japan has set up mass vaccination centers in some cities.

About 1.85% of Japan’s population, 2.3 million people, are fully vaccinated, according to the Johns Hopkins Coronavirus Resource Center.

U.S. bases across Japan reported Friday that another five individuals had contracted COVID-19.

At Yokosuka Naval Base, 35 miles south of central Tokyo, one immunized person affiliated with the U.S. military came up positive after developing COVID-19 symptoms, according to a base news release. The base reported a false positive Tuesday and removed that individual from is active case count. Five people with the disease are being monitored at Yokosuka.

At Yokota Air Base in western Tokyo, one person was identified with the virus by public health authorities, according to a base Facebook post. Yokota has two active cases.

Marine Corps Air Station Iwakuni south of Hiroshima has discovered two individuals with COVID-19 since Thursday, according to a base Facebook post Friday. The two were not quarantined when they tested positive but were isolated afterward, according to the base.

Late Thursday, Kadena Air Base on Okinawa had one person there came up positive while quarantined following travel outside Japan, according to a base Facebook post. Contact tracing was underway, the base said.

Osaka prefecture, which since early May has been in its worst phase of the pandemic, reported another 501 new infections on Thursday, according to prefectural data online. That is less than half the one-day pandemic peak, 1,260, on May 1.

Tokyo on Friday confirmed another 649 people are infected with the coronavirus, according to NHK. That is 205 fewer people than the city reported the same day last week.