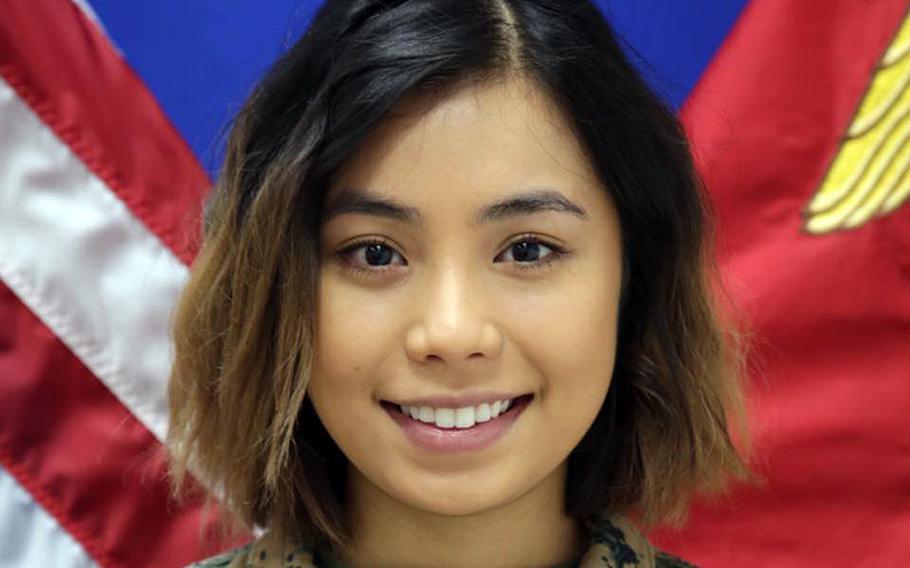 Marine Cpl. Thae Ohu was released under a plea agreement last week after nearly a year in pretrial confinement on charges of attempted murder, aggravated assault and other offenses stemming from an April 2020 attack on her then-boyfriend. The attempted murder charges were dropped as part of the deal. Her advocates say the case is emblematic of the service's mishandling of sexual assault and mental health issues. Facebook/Justice For Thae Ohu ()

The struggle to free Marine Cpl. Thae Ohu from the brig is over, but her family says their fight for justice isn’t.

Ohu was released under a plea agreement last week after nearly a year in pretrial confinement at the Navy Consolidated Brig in Chesapeake, Va., on charges of attempted murder, aggravated assault and other offenses stemming from an April 2020 attack on her then-boyfriend. The attempted murder charges were dropped as part of the deal.

The 27-year-old’s case drew widespread attention last year after her family publicly called for the Marine Corps to release her into mental health treatment, saying the assault came amid a psychological breakdown.

Ohu had suffered severe post-traumatic stress disorder and other issues since she was raped by a Marine supervisor in Japan five years ago, her advocates said.

“Although we cannot and will not overlook the failures of the United States Marine Corps and DamNeck leadership, we are overjoyed Thae is released from their toxic control,” the family said in a statement on the website Justice for Thae Ohu.

Ohu had been assigned to the Marine Corps Intelligence Schools at Dam Neck Naval Base in Virginia.

Advocates for rape survivors and others have criticized Ohu’s treatment as emblematic of the military’s mishandling of sexual assault and mental health issues.

Her sister Pan Phyu posted a video to a TikTok account with 27,000 followers last month, saying she was eager for a trial so the defense could detail its allegations about the command’s negligence and “toxic leadership.”

“#JusticeForThaeOhu isn’t over yet!” Phyu said in a Facebook post last week after Ohu’s release. “We still need to correct the measure that took place in [her] circumstances.”

The victim of Ohu’s attack, Michael Hinesley, also a Marine, had called for the case to be dropped. In a statement to the court published on the Justice for Thae Ohu site, he described her command as more focused on fast-tracking her out of the service, rather than giving her proper care.

Ohu had a history of mental illness before the service, but Hinesley said her condition worsened after the 2015 sexual assault in Okinawa. Locking her up for last year’s assault “stripped away” any progress she’d made in treatment, he said.

In 328 days in the brig, Ohu spent 160 in “special quarters” after threatening to hurt herself, she said in sworn testimony last week. She described the quarters as a bare room with a hole in the middle of the floor for a toilet, Marine Corps Times reported.

“I felt like I was an animal,” she said, claiming she sometimes spent days with feces on her smock, mattress and blanket, and that guards mocked her as “Uhni babooni.”

But after she was put on proper medication her behavior suddenly improved, said Petty Officer 1st Class Sayth Mason, a guard who testified on her behalf, the news site reported.

The Marine Corps’ lead prosecutor in the case, Maj. Zachary Phelps, argued that Ohu’s actions were not the result of mental illness, but a sign of “complete disrespect for the law,” and that she deserved punishment to deter would-be offenders.

In the April attack, she chased Hinesley through their shared Virginia home wielding a knife and stabbed at a bedroom door where he barricaded himself to call the police, Marine Corps Times reported. It cited court testimony in which she said she’d grabbed the knife with suicidal intentions, but then confused her boyfriend for the man who attacked her in Okinawa and became enraged.

Ohu was treated in a long-term psychiatric care program after the assault, but called and visited Hinesley again when she was released in July, violating a protective order.

Then in forced hospitalization, she broke free from restraints and used them to break a window.

She pleaded guilty to aggravated assault with a dangerous weapon for the April incident, two charges of assault consummated by battery, and destruction of military property for the hospital incident, as well as a charge with two specifications of willfully disobeying a superior officer, Marine Corps Times reported.

She also pleaded guilty to communicating a threat, but judge Lt. Col. Michael Zimmerman approved the withdrawal of that charge, Marine spokesman Capt. Sam Stephenson said in an email confirming the charges and pleas.

Two specifications each of attempted murder and violating a protective order, and charges of burglary and violating a lawful general order were dismissed under the deal.

She was sentenced to time served, reduction in rank to E-1 and a bad conduct discharge, but Zimmerman recommended the discharge be suspended for six months, citing her significant mental health history as extenuating and mitigating circumstances.

A bad conduct discharge would make Ohu ineligible for guaranteed veteran benefits and her attorneys argued that medically retiring her instead would let her keep those benefits and allow her to get the help she needs.

Zimmerman’s recommendation allows the general who convened the court-martial to hold off on the punitive discharge for a probationary period, after which it would be canceled if Ohu doesn’t violate terms of the suspension. No decision had been made as to the suspension yet, Stephenson said Tuesday.

Hinesley had sought “intervention, not jail time” from the beginning, he said in his statement. He’d had “no choice but to call the police in order to defuse” the attack, but hadn’t wanted the Marine Corps to prosecute or reprimand her, he wrote, pleading for the court’s mercy.

“I can’t begin to tell you about the nightmares of regret that I would face if this court places a conviction on Corporal Ohu,” he wrote. “It is like you are leaving a wounded Marine on the battlefield.”