Experience is rare on Japan courts, mats this winter 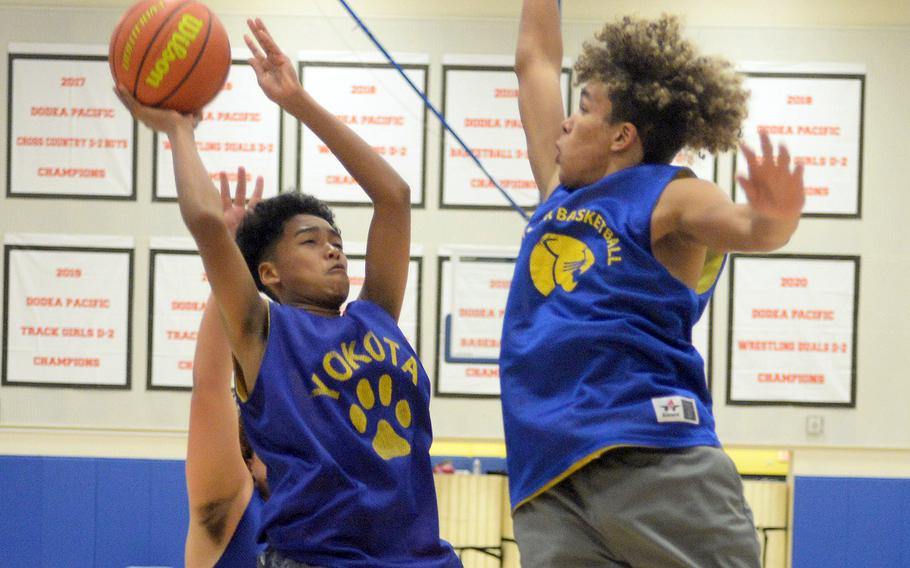 SASEBO NAVAL BASE, Japan – Senior night for Yokota’s boys basketball team promises to be one of the longest in Panthers history.

No fewer than nine seniors dot the Panthers’ lineup, headlined by point guard Dylan Tomas and power forward Zemon Davis, in what could potentially be Yokota’s best chance at a Far East Division II title in seven seasons.

“It will come down to injuries and illness,” Panthers coach Dan Galvin said. “If we can keep everybody healthy and out of sick bay, we have a chance to contend.”

That senior night, scheduled for Jan. 17 against St. Mary’s International, precedes by two days the start of the postseason: The American School In Japan’s Kanto Classic Jan. 19-21 and the Far East D-II tournament, scheduled to be hosted by Yokota Jan. 30-Feb. 1.

While Yokota’s boys don’t have much height, they have speed and quickness and, most coaches agree, the experience factor with so many seniors. And Davis can be a handful inside, Galvin said. Junior Kierstyn Aumua is one of a handful on Zama's girls basketball team who also played volleyball. (Dave Ornauer/Stars and Stripes) 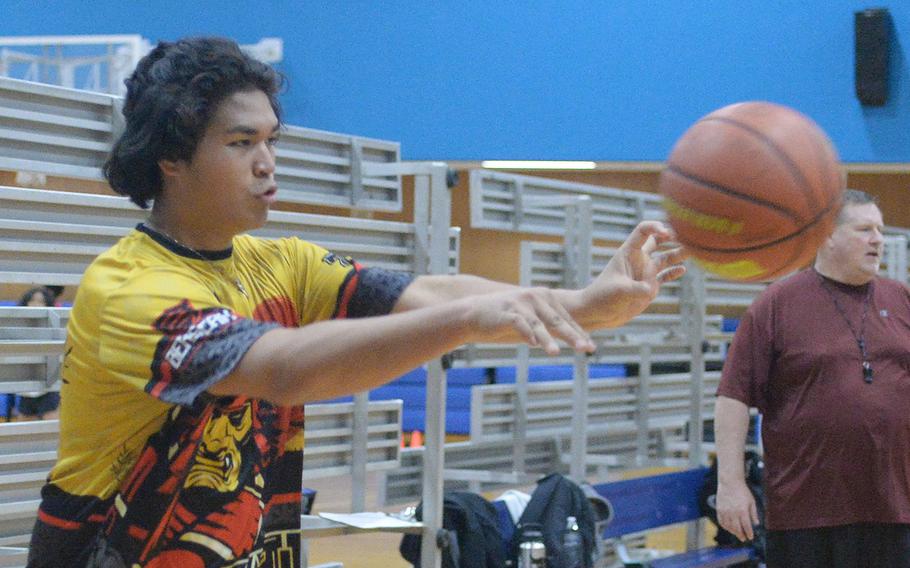 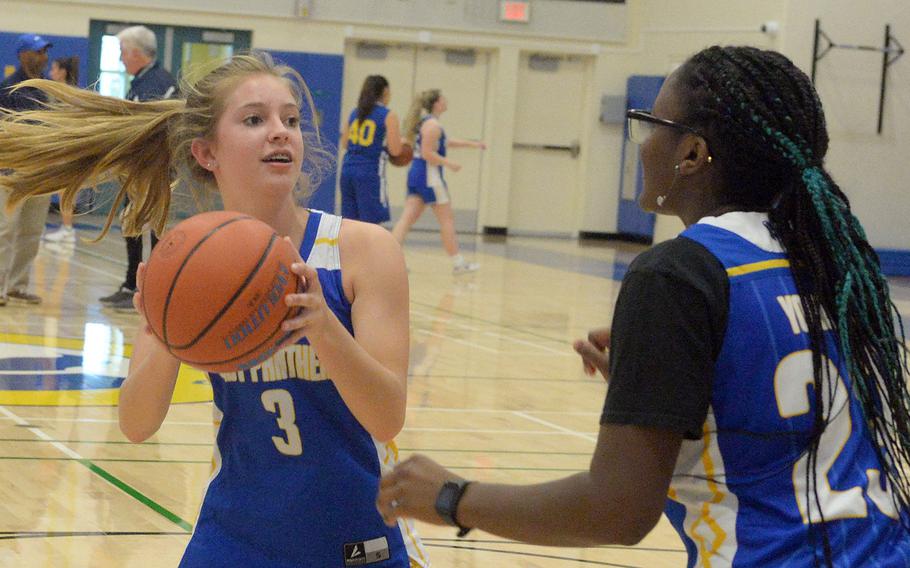 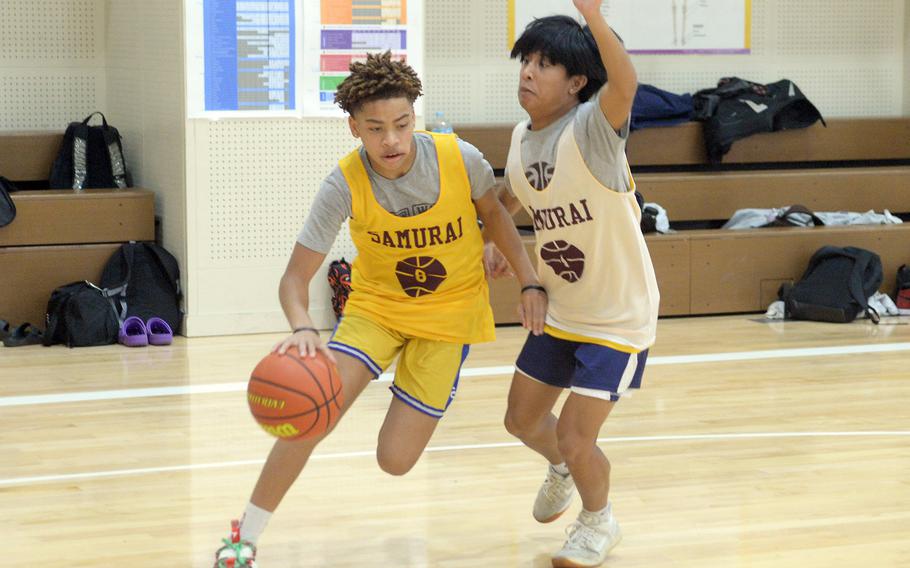 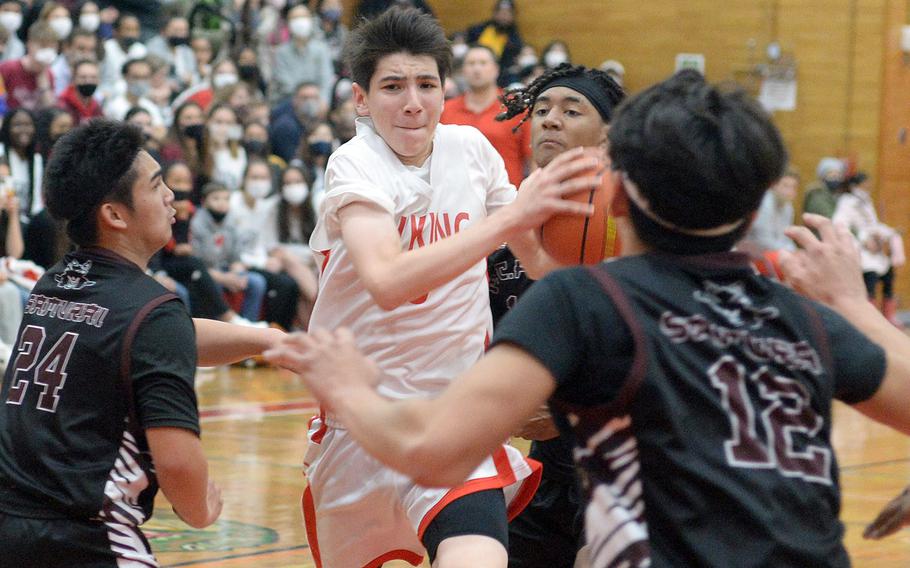 E.J. King senior Cameron Reinhart has grown to 6 feet, 4 inches and can play pretty much any position on the floor. (Dave Ornauer/Stars and Stripes) 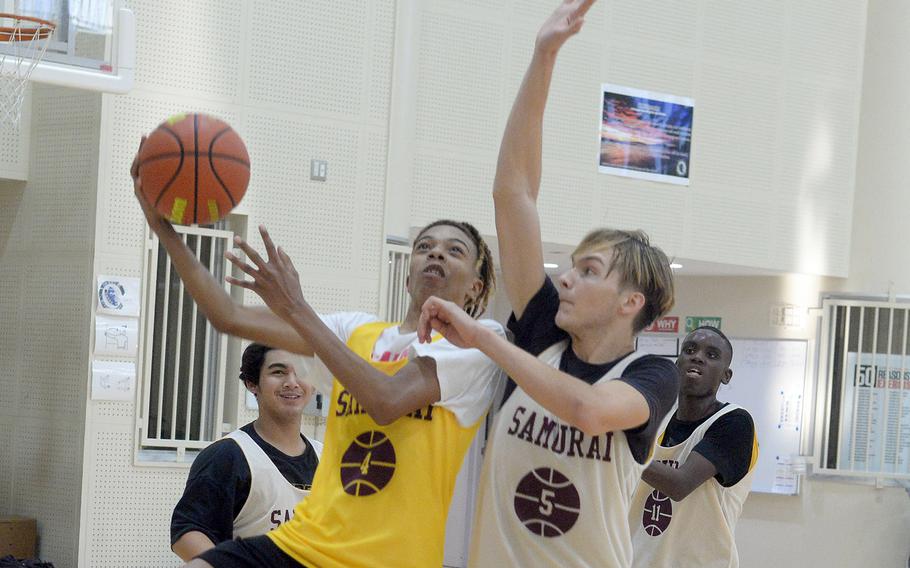 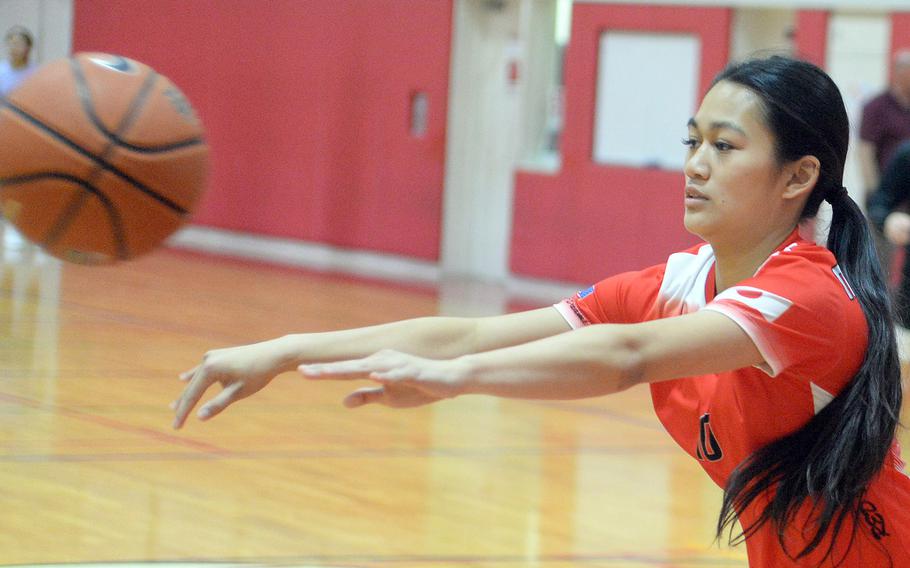 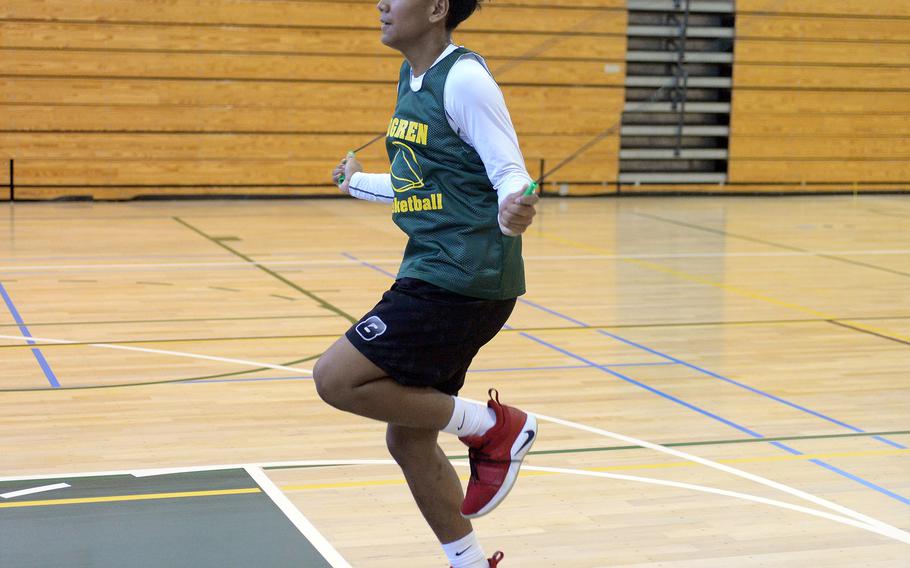 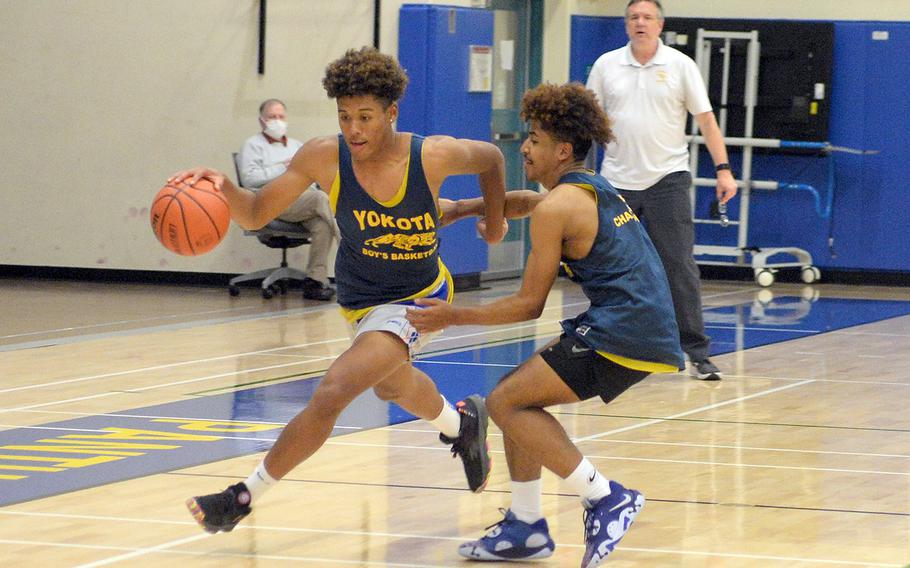 Yokota’s girls also don’t have much height, but one of their guards, Charlotte Rhyne, attended a PGC Camp in the States and said it helped boost her confidence. “I learned a lot of different ways to dribble, to be more confident and not compare myself to others,” she said.

One senior, Alicia Tanoue, has Yokota bloodlines: her father, Mark, graduated Yokota in 1988 and her uncle Paul in 1985, and the latter was taught by one of Alicia’s current teachers, former Panthers coach John Thek. “It’s amazing how my teacher taught my uncle,” Alicia said.

Siblings can be found in other locales. Zama junior Kierstyn Aumua has some court company in her freshman brother, Kekua, called “Rhino” by his teammates. Their dinner conversations invariably turn to basketball.

“We’re talking about how our practices went, offering each other advice, since we’re still kind of new to basketball, what we learned at practice and passing it on to each other,” Kierstyn said.

Another brother-sister combo can be found at Robert D. Edgren, where senior Maliyah Magat plays point guard for the Eagles girls and her sophomore brother Micah for the boys. The two talk over supper about types of plays and defenses and how to break them, Micah said.

“We help each other, we build upon each other,” he said. “It’s a sibling bond.”

“We see each other often on the court, so it makes it easier for us to talk about what we need to improve on,” Maliyah said.

Guards are key to E.J. King’s fortunes, both on the girls side, where sophomore twins Miu and Moa Best – coach McKinzy Best’s daughters – man the backcourt, while 6-4 senior Cameron Reinhart can play guard or most anywhere because of his height.

“The only player who can stop Cam is Cam,” Perry boys coach Daniel Burns said.

The Samurai boys must figure out how to replace departed big man Shion Fleming, but Burns says the team might have better guard play than they did last season. “We’re a young team, but we’ll be competitive,” he said. “We’ll be OK.”

Perry’s girls team is coming off a winless 2021-22, but both players and new coach Joshua Henry say they’re optimistic.

“We have more potential as we have most of the returners and more experience,” senior guard Aiya Versoza said. “We have a lot of people that work outside of practice to help improve. We like to work with each other to better ourselves.”

“With Mikaila, Amyka and Jasmine, you can build any kind of team around them,” Red Devils coach and athletics director Joey White said. 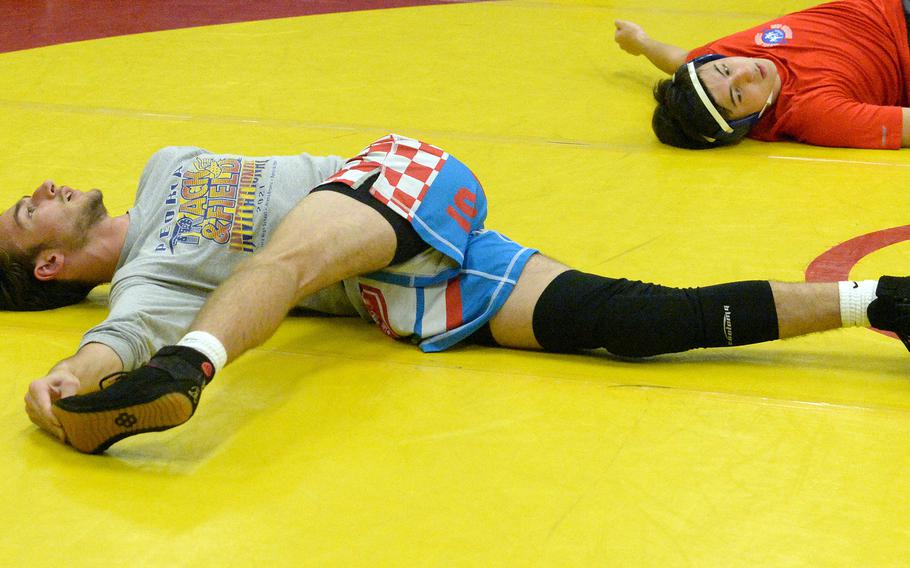 Senior 148-pounder Tate Rannow is one of a small handful of returners to a young Yokota wrestling team. (Dave Ornauer/Stars and Stripes) 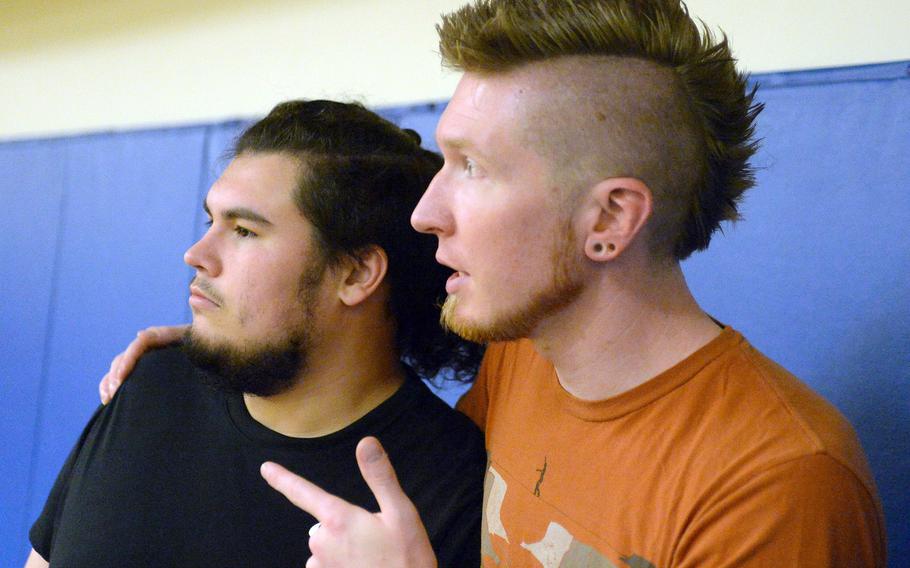 It appears to be a rebuilding year across the board for most DODEA-Japan mat programs, though Perry and King are showing promise and greater numbers than in the past.

“We have a lot of wrestlers that show a lot of potential that could do good,” Samurai sophomore Greg Campbell said. He and his twin brother Sebastian won DODEA-Japan tournament titles last year. “We have a strong base that we could build off of.”

Edgren has no seniors, but does have some experience in sophomores Sebastian Sanchez, Nikolas Hawkins and Sidney Cogswell. A bit of good news: the Eagles will wrestle under new lighting and on new mats in the Edgren Middle School Gym.

Yokota was hit hard by graduation, leaving the Panthers with “a lot of fresh faces,” coach Theo Kuntz said. “But they’re hungry, they want it, they’re working hard. Senior Tate Rannow returns at 148.

Zama’s squad is thin and has no seniors, but coach Guy Snyder says returning sophomore Destin Malone and stateside transfer Larry Chiu each show potential. Helping out are assistants Chris Waite and Glenn Simpkins, whom Snyder calls “a blessing to have in the room.”