Okinawa winter sports season over, but others to resume 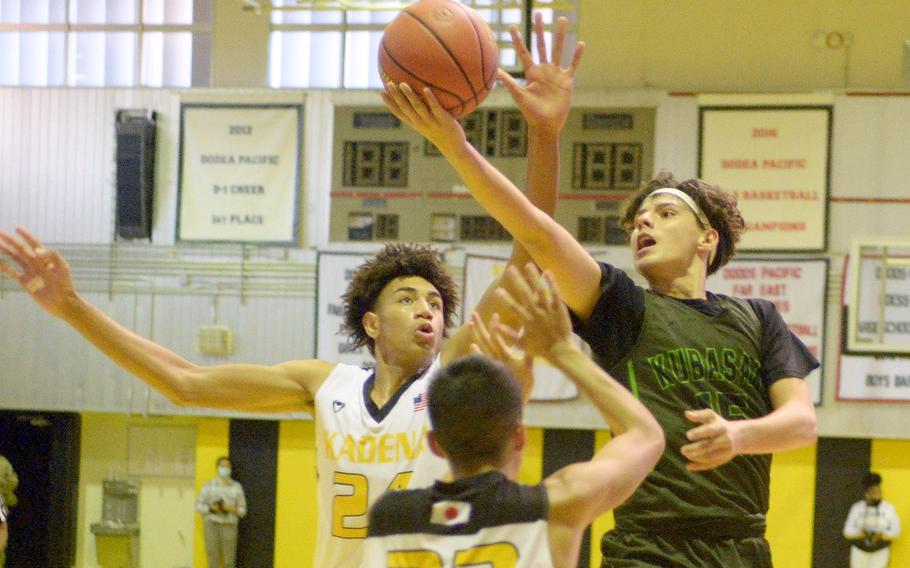 Kadena's boys basketball team played Kubasaki four times over the course of the season, three times in December. Due to an uptick in COVID cases, the schools will not face each other again during the rest of the winter season. (Dave Ornauer/Stars and Stripes)

URUMA, Okinawa – While practice will get the go-ahead to restart Tuesday, any hope the Okinawa high schools will play each other in basketball and wrestling the rest of the winter season is pretty much off the table, DODEA officials said.

Citing an uptick in coronavirus cases and student-athletes out of school due to illness and contact tracing, Kadena and Kubasaki “are working together to determine how they can best end the winter season,” DODEA-Okinawa community superintendent Jacqueline Ferguson said.

The season is “unlikely to proceed in a traditional manner,” Ferguson said, meaning games between the schools likely won’t happen.

Meanwhile, teams in DODEA’s Japan and Korea districts have gotten the nod to begin practicing and will play the next two weekends in Korea and the next three in Japan. Guam High has already resumed competition, with wrestling dual meets on Saturday.

Kadena’s boys and girls basketball teams are scheduled for in-house black-and-gold games Feb. 10. “We all really wanted a different end to this season, but (we) have to put safety first,” Kadena athletics director Jason Stevens said.

Kubasaki is also planning a similar event, but no date has been set or announced, DODEA-Pacific athletics coordinator Tom McKinney said.

DODEA-Korea’s basketball games are now boys at Osan and girls at Humphreys this weekend and boys at Daegu and girls at Osan the following weekend.

“We’re a go until we hear no,” Daegu athletics director Blake Sims said.

The Warriors wrestling team has shut down, Sims said, citing too few wrestlers to continue. Thus, Korea wrestling will feature Humphreys vs. Osan the next two weeks.

It means Korea will have just three weeks of competition this season, including the Dec. 11 openers.

“But that’s better than what we had last year, which was nothing,” Sims said of the canceled 2020-21 season. “This is a big step forward.”

DODEA-Japan schools get the season back underway Tuesday with Yokota facing Nile C. Kinnick in basketball.

Reaction among basketball coaches and athletes at Japan schools was positive. “Having the (DODEA-Japan) tournament is huge,” Yokota boys coach Dan Galvin said.

King’s boys players were “cheerful and in high spirits” when they learned the Japan season would continue, Cobras coach Travis Elliott said. “COVID has taken a toll on them, so any positive news about their high school experience is good news.”