It’s not pretty, but Kadena improves to 2-1 against Kubasaki 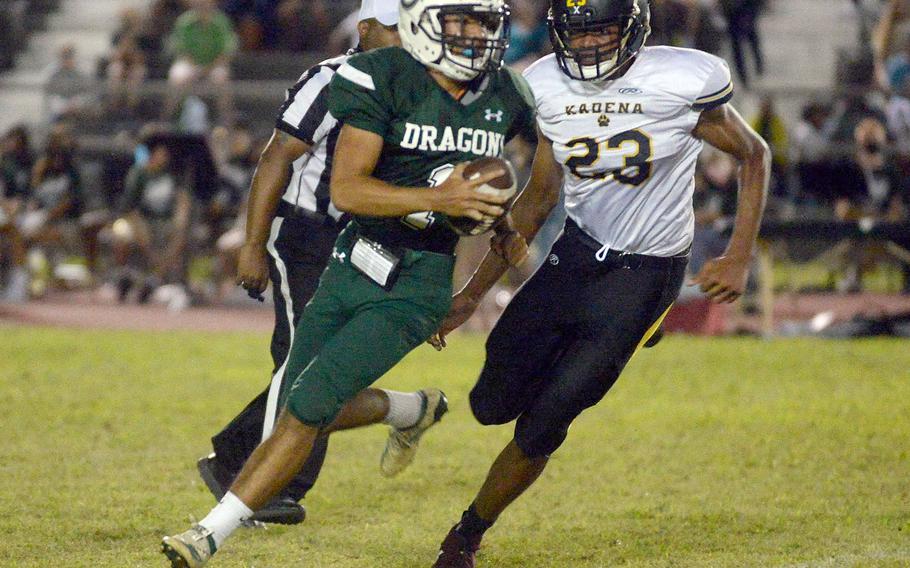 CAMP FOSTER, Okinawa – In a game chock full of penalties and turnovers, Kadena got the offense it needed with a lengthy third-quarter scoring drive to survive Kubasaki and grab a 2-1 season-series lead.

Anthony Skalamara sneaked in from 1 yard out for a touchdown with 3 minutes, 17 seconds left in the third period. It proved to be the game-winning score as the Panthers outlasted the Dragons 13-7, tarnishing Kubasaki’s homecoming Friday at Mike Petty Stadium.

Though victorious, Kadena coach Sergio Mendoza seemed anything but happy about the outcome.

“Most teams would be happy about winning a game like this,” he said. “We left so many points out there on the field. We didn’t come away with the points that we could have. And penalties killed us.”

The contest featured a combined eight turnovers and 19 penalties for 180 yards, 12 of the penalties of the major variety, 10 yards or more. 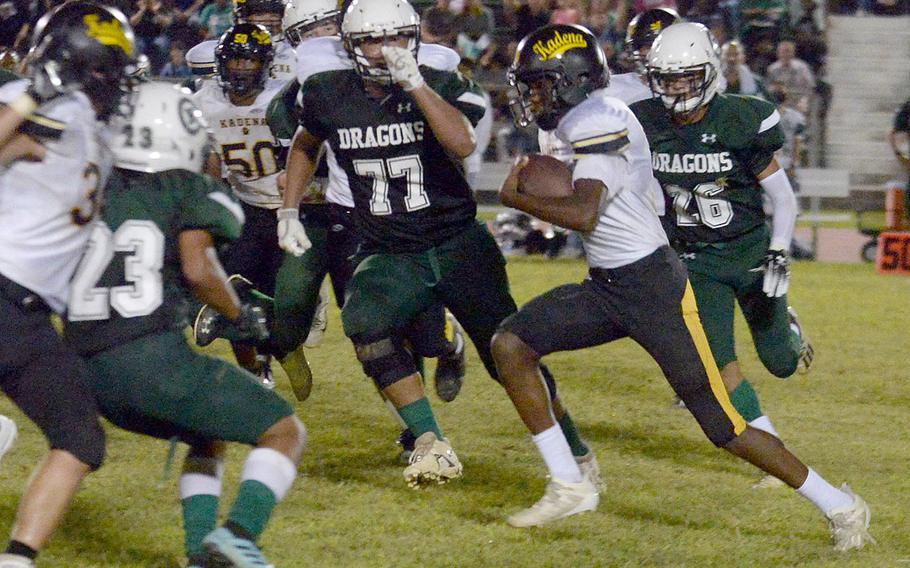 “Nothing but mistakes on our part,” Dragons coach Tony Alvarado said. “One step forward, two steps back. The team that plays mistake-free football is going to win. And that team tonight was Kadena.”

As was the case with the teams’ previous two games, Kadena’s 21-20 win Sept. 24 and the Dragons’ 6-0 win a week later, Friday’s game was a defensive struggle.

Kadena went up 7-0 with 7:43 left in the first quarter on Trent Fowler’s 10-yard touchdown run.

That came after a botched Kubasaki punt snap into its own end zone. Punter Ian Lyons grabbed the ball and threw a desperation pass to lineman Braden Dudley that gave Kadena the ball at Kubasaki’s 15.

It remained 7-0 until Kadena’s first possession of the second half, 15 plays, 70 yards in 8:43, capped by Skalamara’s TD sneak.

Kubasaki finally got on the board with 8:27 left in the game, when backup quarterback Carlos Robles sneaked in from 3 yards out, a touchdown set up by three runs of a combined 62 yards by Godfrey Wray. But it was as close as the Dragons would get. Wray finished with 58 yards on 18 carries and starting quarterback A.J. Millette was 4-for-4 for 55 yards passing for the Dragons. Fowler had 88 yards on 21 carries and Javin Mariano went 4-for-5 for 38 yards for Kadena. Andrew Vessely recovered two fumbles for the Panthers.

The teams collide one last time at 6 p.m. Friday at Habu Field.