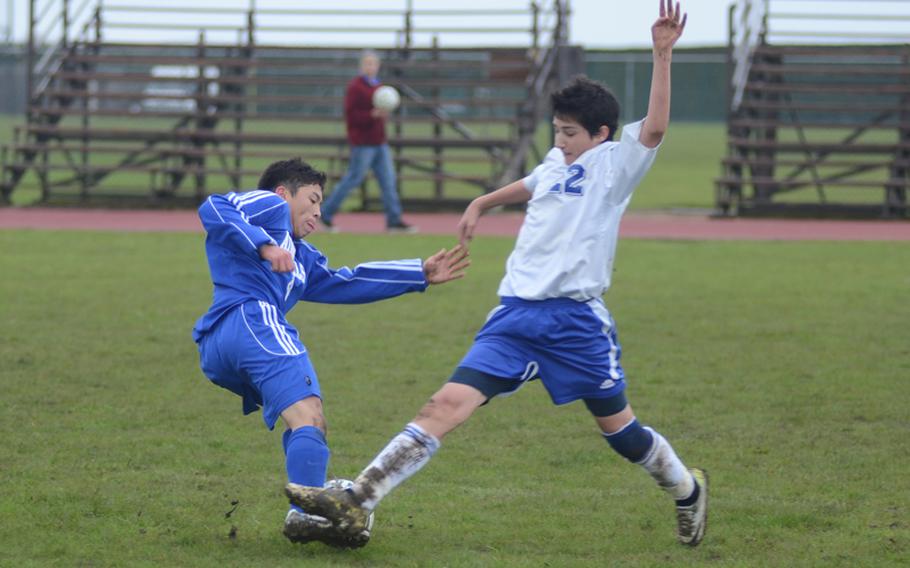 Buy Photo
Rota's Kris Rios, left, and Brussels' Merab Chitanava stab at the soccer ball during a meeting Friday at RAF Alconbury, England. The Brigands won the match by a score of 2-0. Chitanava and Lazar Knezic were the goal scorers for Brussels. (David Hodge/Stars and Stripes)

Buy Photo
Rota's Kris Rios, left, and Brussels' Merab Chitanava stab at the soccer ball during a meeting Friday at RAF Alconbury, England. The Brigands won the match by a score of 2-0. Chitanava and Lazar Knezic were the goal scorers for Brussels. (David Hodge/Stars and Stripes) 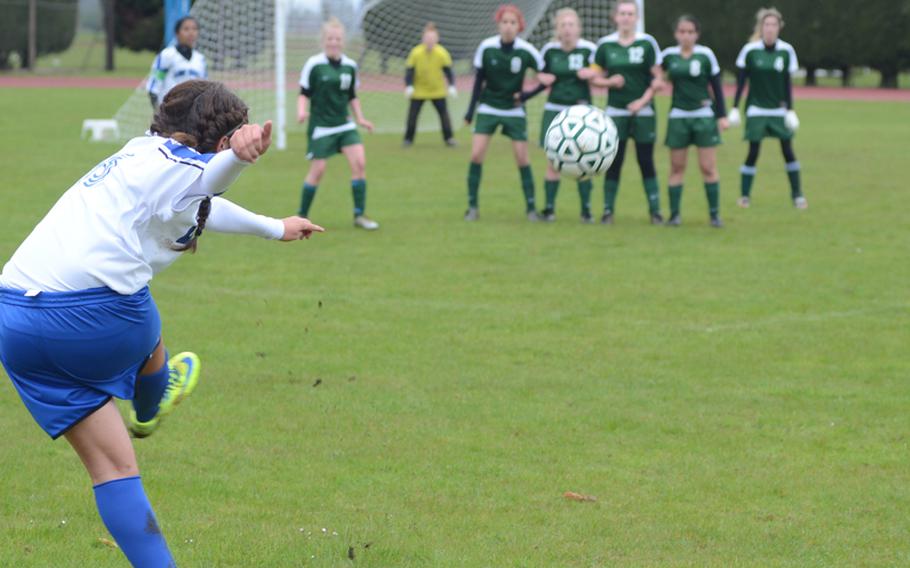 Buy Photo
Rota's Keanna Garcia boots a free kick towards the goal during a match against the Alconbury Lady Dragons on Friday in England. Garcia scored the only two goals in the contest. (David Hodge/Stars and Stripes) 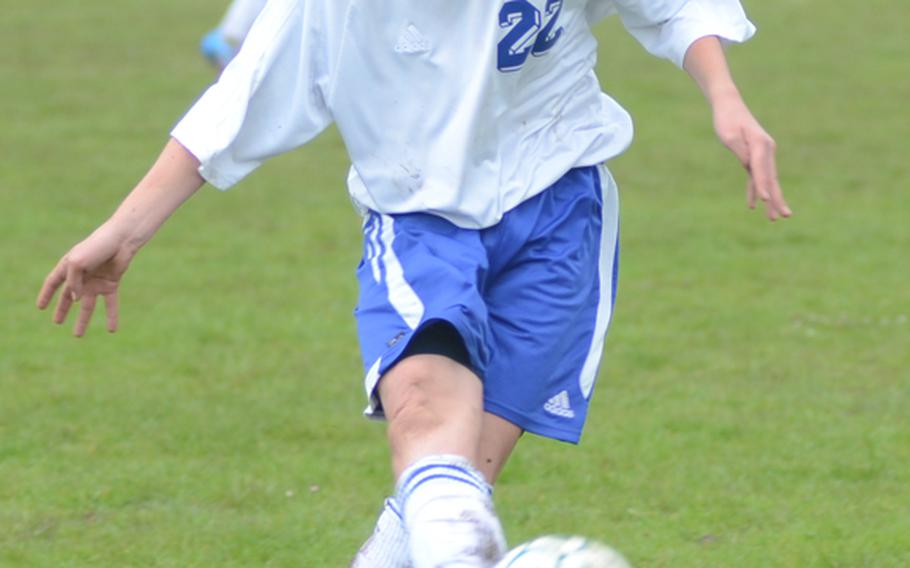 Buy Photo
Brussels' Merab Chitanava sends the ball down the field during a match against the Rota Admirals. Chitanava scored one of the two goals for the Brigands in the contest. (David Hodge/Stars and Stripes) 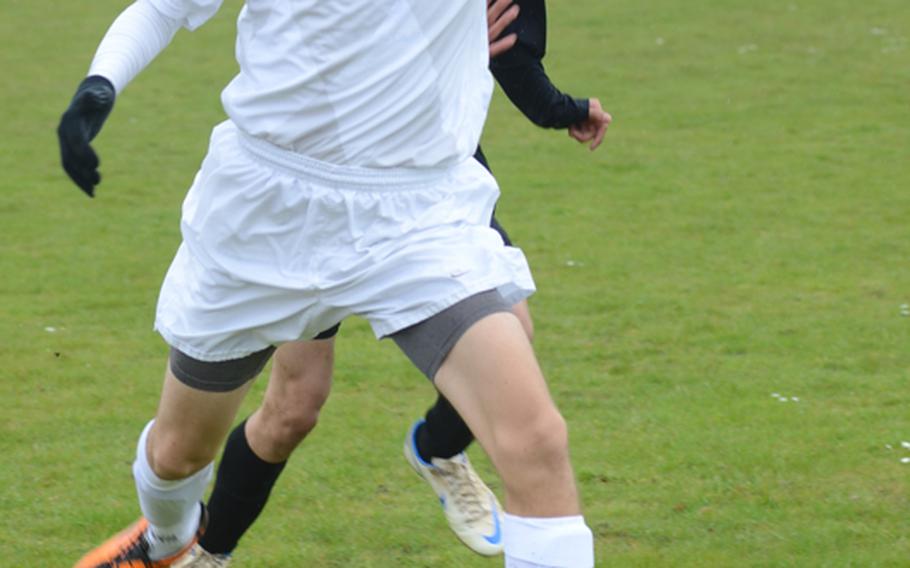 Buy Photo
Rota's Juan Carlos Shay prepares to boot the ball downfield during a match against the Alconbury Dragons, Friday, at RAF Alconbury, England. The Admirals and Dragons played to a 2-2 draw in the contest. (David Hodge/Stars and Stripes)

RAF ALCONBURY, England &mdash; Rain dominated the first day of a two-day DODDS-Europe Division-III soccer festival, though there were moments of good soccer as well.Alconbury&rsquo;s boys opened the day with a 2-2 draw against the Rota Admirals. Conditions were arguably at their worst for the game&rsquo;s 1 p.m. start time, and Rota&rsquo;s Niko Fichera and Victor Rivera each scored within the first few minutes. It was a sluggish start for the home team as the team&rsquo;s leading scorer, Jeff Black, was consistently hounded by Rota defenders. In the second half, Alconbury was awarded a free kick just outside the penalty box. That led to some savvy play between the two team captains of the Dragons. Before the Admirals knew what had hit them, Tyler Grissett lobbed the free kick over the wall of players to an awaiting Black, who booted it in the back of the net. When asked about the play after the game, Grissett, a senior, said &ldquo;we&rsquo;ve used (that move) quite a few times.&rdquo; Dragon coach Jeffrey Black noted that the two players are often on the same page whether off the field or on the field, barking orders to teammates. &ldquo;We both play off base on some English sides, and we&rsquo;re just loudmouths anyways,&rdquo; Grissett said. The Dragons picked things up later in the match with their second goal from a penalty kick by Black. Rota coach Tom Birch said after the game it seemed like &ldquo;as the conditions worsened, the game started to favor the Dragons.&rdquo; In the girls&rsquo; game, the Admirals&rsquo; persistent play paid off with a 2-0 win against the Dragons. Rota had numerous shots on goal during the game and Keanna Garcia found the back of the net twice. Dragon goalkeeper Kayla Gray had an impressive nine saves during the contest. Her counterpart at Rota, Tiffani Driscoll, had three saves.In the third match of the day, a boys&rsquo; matchup between Brussels and Rota, the field began to show a few signs of wear, with a few players losing their footing and slipping. Play continued, however, and in the end Brussels prevailed with 2-0 win. Merab Chitanava and Lazar Knezic were each credited with a goal in the contest. The fourth game of the day, this one featuring the girls&rsquo; teams from Brussels and Rota, continued past Stars and Stripes&rsquo; deadline. Results and statistics from that match will be posted Saturday as Menwith Hill joins the action. Games kick off at 8 a.m.hodged@estripes.osd.mil