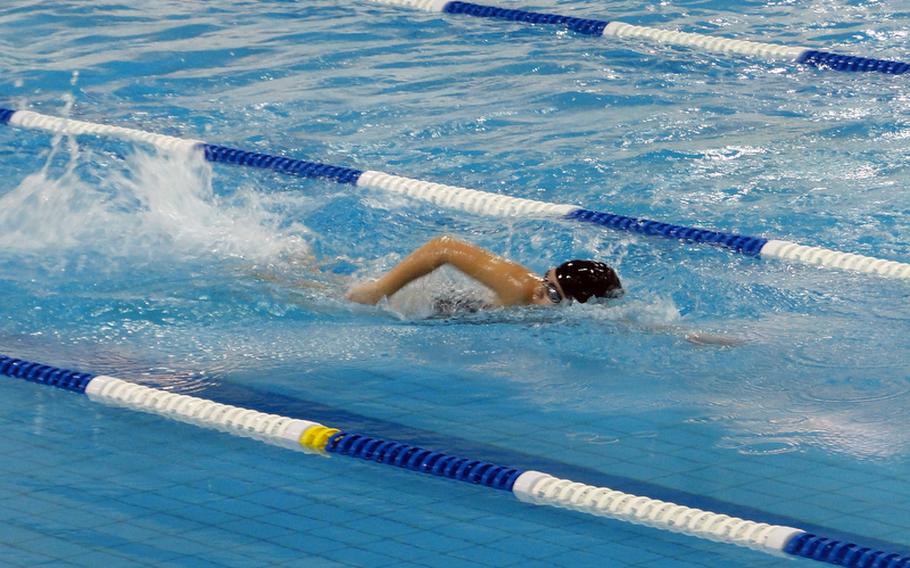 Sarah Alfalaij, a senior-to-be at Bahrain High School, will compete for Bahrain in swimming at the 2012 Summer Olympic Games in London - likely the first DODDS student ever to be an Olympian while still in high school. (Courtesy of Carrie Alfalaij)

Sarah Alfalaij, a senior-to-be at Bahrain High School, will compete for Bahrain in swimming at the 2012 Summer Olympic Games in London - likely the first DODDS student ever to be an Olympian while still in high school. (Courtesy of Carrie Alfalaij) Sarah Alfalaij, a senior-to-be at Bahrain High School, likes competing in the breaststroke as shown her during a recent practice. But she'll be competing in the 50-meter freestyle in this summer's Olympic games - likely the first DODDS student ever to be an Olympian while still in high school. (Courtesy of Carrie Alfalaij) Sarah Alfalaij, a senior-to-be at Bahrain High School, said she'd like to see how far her hard work can take her as a swimmer in coming years. It'll take her to London this summer to compete in the Olympic Games. (Courtesy of Carrie Alfalaij)

Sarah Alfalaij just finished her junior year at Bahrain High School and, like many DODDS students, she&rsquo;ll be traveling this summer around Europe; her itinerary includes the Summer Olympics in London &mdash; as a participant.

Alfalaij, whose father is Bahrani and whose mother is American, will be representing Bahrain in swimming in the 2012 Summer Olympic Games.

&ldquo;It&rsquo;s a sport I enjoy,&rdquo; she said in a recent phone interview. &ldquo;I&rsquo;m really good at it.&rdquo;

Probably not good enough, however, for a medal, she said.

&ldquo;I&rsquo;m not going to win first or the gold,&rdquo; she said. &ldquo;There&rsquo;s a lot of really good swimmers with better times than mine. I&rsquo;m just going to try to post my personal best time.&rdquo;

Under the complex qualification rules set out by the International Federation of Swimming, FINA, countries whose swimmers do not make either the official Olympic Qualifying Time in their respective events, nor the easier to achieve Olympic Selection Time, may be authorized to send up to two swimmers to fill &ldquo;Universality Places,&rdquo; provided they have competed in specified events and are approved by FINA, according to the organization&rsquo;s website.

Alfalaij&rsquo;s best time in the 50-meter freestyle is 31 seconds, she said. The selection time posted on the FINA website is 26.15 seconds.

Tariq Salem, one of Alfalaij&rsquo;s coaches, said in a phone interview he&rsquo;s hoping that his swimmer not only improves her best time, but soaks up the atmosphere of the games and sees how other top athletes conduct themselves.

That career will include her senior year at Bahrain. Her father, Abdulrahman Alfulaij, is a psychologist at the University of Bahrain. Her mother, Carrie Alfalaij, is an American who works for the Defense Logistics Agency on base. Younger brother Ryan plays tennis &mdash; one of many sports she tried out before deciding to go with swimming.

Alfalaij is a Bahraini citizen who has attended DODDS schools for several years.

She is believed to be the first athlete ever to compete in the Olympics while still enrolled in a Department of Defense Dependents School.

Not bad for someone who&rsquo;s been competitively swimming for only about three years.

There have been DODDS students who have competed in the Olympics after their school years were over, but DODDS has no record of anyone being in the Olympics while still enrolled, according to public affairs officer Bob Purtiman.

Salem said he saw her potential the first time he saw her swim in a local competition several years ago. But he said it takes more than natural talent and hard work to succeed in the sport.

While Alfalaij&rsquo;s training routine &mdash; about two hours in the pool a day, running and gym work on top of that &mdash; is a strong commitment for a high school student, it&rsquo;s nothing compared to what many of the sport&rsquo;s top athletes endure, he said. Many spend six hours a day in the pool, and they almost never take a day off.

Salem said Alfalaij&rsquo;s career would benefit strongly from attending a university with a good program in the States and the family is looking into that.

Bahrain isn&rsquo;t exactly a world power when it comes to competitive swimming. It has never won a medal in the sport, Salem said. Alfalaij won&rsquo;t be the first female swimmer competing for the country, though. The country has sent two swimmers each year to the games since 2000 and Alfulaij said she has every intention of going multiple times.

&ldquo;I still have a long way to go,&rdquo; she said, pointing out that one potential competitor in her event, American Dana Torres, is 45. She said she&rsquo;d also like to compete in other freestyle or breaststroke events if her times improve.

Bahrain principal Doug McEnery said regardless of how Alfalaij does in this summer&rsquo;s event, it&rsquo;s a great opportunity.

&ldquo;Just the fact that you&rsquo;re getting to represent your country and get to compete against the best in the world is pretty nice,&rdquo; he said. &ldquo;And she really represents the Olympic ideals. Not just as an athlete, but how she conducts herself all the time.&rdquo;