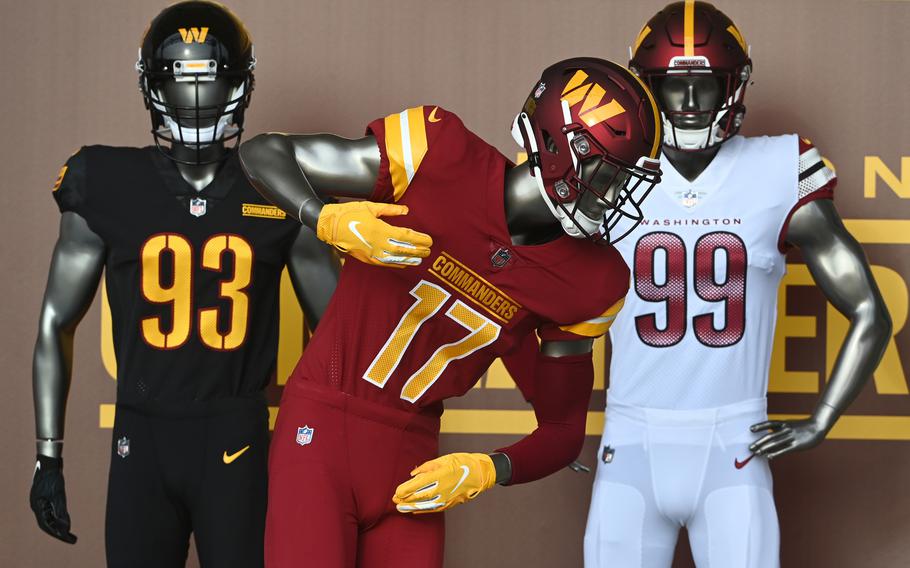 The uniforms of the Washington Commanders on display at a press event, revealing the new team name and brand identity at FedEx Field on Feb. 2, 2022. (Jonathan Newton/Washington Post)

Finally, it has a name. Eighteen months after dropping its longtime name and beginning an extensive search for a new one, Washington's NFL team revealed Wednesday that it will be the Commanders, a tribute to Washington's military ties.

The much-anticipated announcement, made at FedEx Field with owners Daniel and Tanya Snyder present, along with team president Jason Wright and nearly a dozen current and former players, formally closes the team's 87-year chapter as the Redskins and marks the start of a new era - at least aesthetically - with the hope Commanders both resonates with fans and reflects the makeup of the Washington area, home to the Pentagon and bases for every branch of the military.

On a makeshift stage set up in a pavilion outside the stadium, Daniel Snyder gave a brief, scripted speech thanking those involved in the rebranding process for "helping us to connect our past to our future." Tanya Snyder, his wife and co-CEO, offered similar words before unveiling three mannequins outfitted in the team's new uniforms - one in all burgundy, another all-white set and the alternate black uniforms.

"We landed on this in part because we believe the Washington Commanders can carry the rich legacy of this team. A championship legacy," Wright added. "It's something that broadly resonated with our fans in this process, and it's something that embodies the values of service and leadership that really characterize the DMV."

Three decades removed from its last championship and the glory years of Coach Joe Gibbs, the team's beloved former coach, Washington's legacy is complicated, and, more recently, fraught with controversy and litigation. Since Snyder purchased the team in 1999, Washington has produced only five winning seasons and has been plagued by off-field woes - from its controversial name, considered a slur and the target of Native American protests, to the dozens of accusations of sexual harassment and bullying in the workplace.

On Thursday, only a day after the team announced its new name, the House Committee on Oversight and Reform will hold a roundtable titled "Examining the Washington Football Team's Toxic Workplace Culture." The goal of the discussion is to give congressional members a chance to hear firsthand accounts of former team employees who experienced harassment and a toxic culture while working for the team, which may help form potential legislation related to workplace harassment and discrimination.

The stakes surrounding a rebranding couldn't be higher. The team has been bleeding fans with shrinking attendance figures and lackluster merchandise sales, and it has spent the past several years negotiating with Maryland, Virginia and D.C. governments about land for a new stadium, desperate to move on from the aging FedEx Field in Landover, Md. Some officials in the District said a stadium in the city could not happen until the team changed its name.

Mayor Muriel E. Bowser, D, said Wednesday's announcement is "a new, necessary chapter," and called on the team, which is headquartered in Virginia and has played its home games in the Maryland suburbs since 1997, to return to the District.

Even with the congressional inquiry and harassment allegations hanging overhead, team officials were eager to declare Wednesday the start of a new era, not simply a new coat of paint.

The team now hopes its fan base - the loyal, the apathetic and the angry - embraces the new name and new logo as a new rallying point.

Team officials knew a name wouldn't please everyone - like Snyder, many resisted a change for years - and the immediate reaction across the region was decidedly mixed with many bar stool pundits criticizing the reveal as uninspiring.

"I don't think it shows a lot of imagination," said Sean Cissel, 42, who grew up in Prince George's County rooting on Gibbs' Super Bowl-winning teams. He said winning games would certainly influence his fandom, as he's increasingly distanced himself emotionally from the team in recent years.

"Just anything that Snyder touches, I think, for a lot of fans like me, is going to be automatically a loser," Cissel said.

Still, some fans gathered at FedEx Field hours before the press-only announcement, arriving as early as 3 a.m. to buy new Commanders merchandise. Stephen Boyd, known around the stadium as "Rally Captain," wore his signature chain and "W," and said "we're going to do what it takes to get the fan base riled up to get behind" the franchise's new identity.

"A lot of people aren't gonna like it," he said. "But there's also going to be a few out here that do like it. Give it time. They will eventually gravitate to it. It's gonna take a minute. But the fact of the matter is, we're here. We're die-hards and we aren't going anywhere."

Washington's rebrand was years in the making, dating back to the early 1970s when its old name received criticism and even drew protests for being derogatory toward Native Americans. For years, Snyder vowed he would "NEVER, in all caps" get rid of the Redskins name. But that changed in 2020, when the murder of George Floyd sparked protests worldwide and led to an intensified national discussion about racial equality. The team's top sponsors, including FedEx and Pepsi Co., threatened to pull the plug on their agreements, and as the pressure mounted, the team finally relented in July 2020, deciding to retire its moniker and adopt the Washington Football Team as a temporary name while it began to overhaul its front office and find a new identity.

"I don't think they had a lot of choice but to go with this interim brand name because I think the pressure came fairly quickly," Washington's former vice president of strategic marketing, George Perry said. "You have to make sure you get the right brand, and it looks like they've done a lot of research and tried to get it right."

Wright, who was hired a month after Washington shed its old name, helped lead a search and remained the face of the initiative, appearing in promotional videos and writing letters to fans on the team's website. Along with members of his executive team, the digital creative agency Code &amp; Theory, designers from Nike, and NFL executives, Wright guided a rebrand that he said focused heavily on the input of fans, alumni and current players and coaches.

Former quarterback Doug Williams, now a senior advisor to Wright, participated in focus groups to weigh in on possible names and logos. His preference was to keep the Washington Football Team. He said he's embraced the Commanders, but moving on from the team's old name is bittersweet.

"But we all realize that the name has to be changed," he said. "So we've got to grab onto this name, put our arms around it and go from here.

"We're the Washington Commanders. But at the end of the day, when you put your Super Bowl ring on, you know what it says," he continued. Speculation over the team's new name was rampant on social media in the months preceding the announcement. Internet sleuths scoured trademark applications and website domains, and found clues hidden in videos posted on the team's website. Leaks of the logo and the name were circulated, and interviews with alumni, notably Joe Theismann, only validated many fans' theories.

Then on the eve of the announcement, a news helicopter for the local NBC affiliate zeroed in on a Commanders banner hanging inside FedEx Field, a dead giveaway just hours before the launch.

"Welcome to not the best-kept secret in D.C.," Daniel Snyder said jokingly as he stepped up to a podium outside the stadium Wednesday to present the new name and uniforms.

The announcement elicited reaction across the NFL and beyond, with even President Biden tweeting: "I suppose there's room for two Commanders in this town," along with a photo of his puppy, Commander, in front of the White House.

As fans continue to digest the new identity, the Washington Commanders must tackle an even bigger hurdle. With a new name, new logo and new uniforms, any semblance of true change will likely start with its performance on the field.

"It's an opportunity for our players as we step into this new phase of our organization to build a new legacy," Rivera said. "Believe me, that's something I'm going to harp on with our players. This is our chance to do that, and probably the best way, obviously, is to win."

The Washington Post's Andrew Golden contributed to this report.