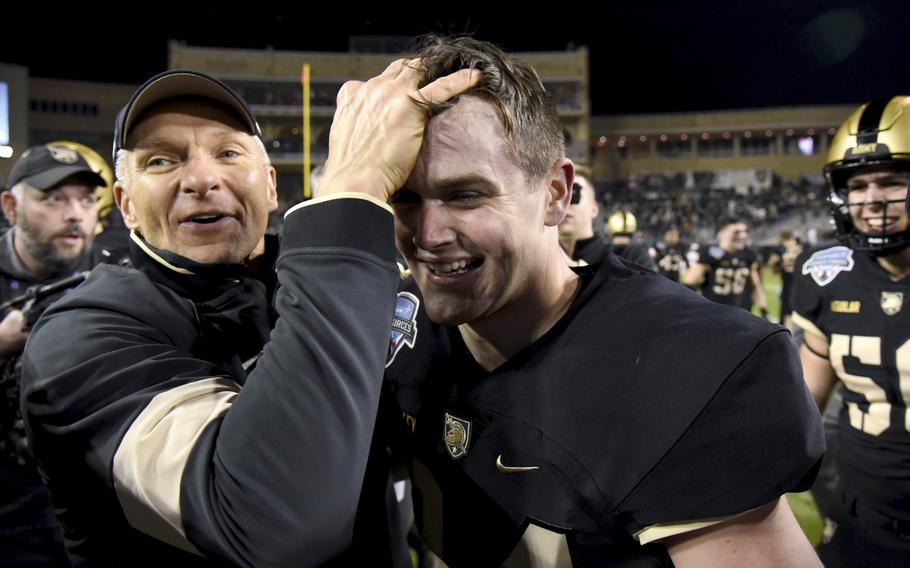 A handful of fourth- and even fifth-year players provided the impetus to wrap up their careers on a high note, in the wake of one of their most devastating defeats. Army rallied in the final minute to beat Missouri, 24-22, in the Armed Forces Bowl on Wednesday evening in Fort Worth, Texas, wrapping up a 9-4 season.

Quarterback Christian Anderson, only days after being commissioned as a Second Lieutenant and December graduate, provided the steadying force as Army matched up with Missouri of the ever-powerful Southeastern Conference. He guided Army on two scoring drives, the latter to start the third quarter giving hope that the Black Knights — though favored by 6.5 points — could keep up with the speed and skills of an SEC team.

Cedrick Cunningham and team bowl MVP Arik Smith combined for 25 tackles, making huge plays in the second half to finally slow a Tigers’ attack that had scored on every possession in the first half.

Brandon Walters made two receptions, none more important than his 14-yard grab on a fourth-down bootleg call by backup quarterback Tyhier Tyler to give Army a 21-16 lead early in the fourth quarter.

And then there was Jabari Laws, the former starting quarterback who battled back from two knee surgeries to make himself essential to the team once again. Even though he had not seen significant action in two months, Laws prepared himself as though he was the starter. Trailing by a point with just over a minute to play, Laws was called upon to move Army into scoring position. He ran for one first down, threw for two more (and a third if you consider how a defensive facemask call broke up a sure reception and led to new downs by penalty). He deftly moved Army 51 yards in 68 seconds, leading to Cole Talley’s winning field goal at the final gun.

Wednesday’s win also marked the first time Army has beaten a Power 5 Conference team since 2017 after losing seven of those matchups. The 2021 team is also the 15th in program history (dating back to 1890) to have posted at least nine wins.

The last four graduating classes have the distinction of competing in three bowl games for the first time (Army did not participate in bowl games until 1984). The current seniors went 2-1, beating Houston in the 2018 Armed Forces Bowl and bowing to West Virginia in the 2020 Liberty Bowl. Army head coach Jeff Monken, right, looks on as his team celebrate with the trophy after their win in the Armed Forces Bowl NCAA college football game against Missouri in Fort Worth, Texas, Wednesday, Dec. 22, 2021. (Emil Lippe/AP) Missouri defensive lineman Darius Robinson (6) is unable to stop Army running back Jakobi Buchanan, center top, who reached the end zone for a touchdown on a running play in the second half of the Armed Forces Bowl NCAA college football game in Fort Worth, Texas, Wednesday, Dec. 22, 2021. (Emil Lippe/AP) 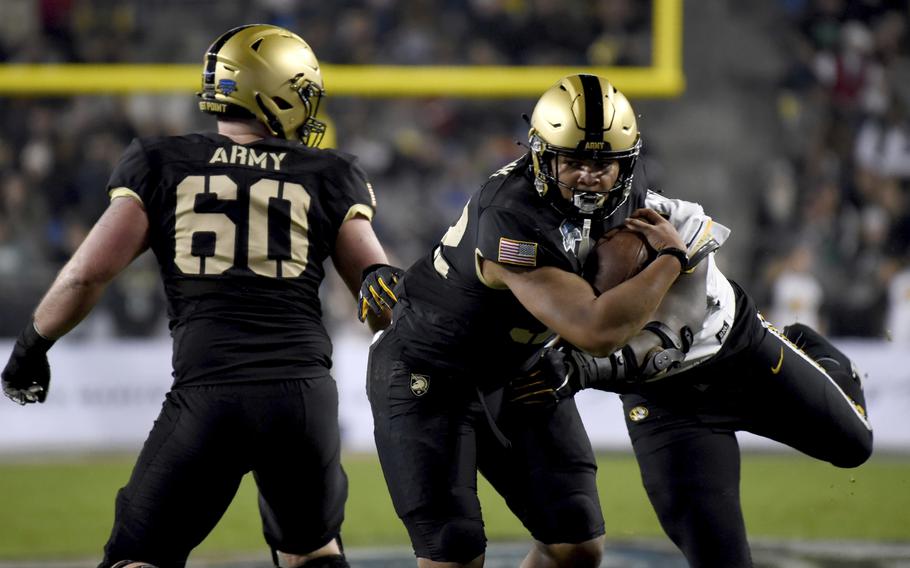 Army’s Connor Finucane (60) looks on as running back Tyson Riley attempts to escape the grasp of Missouri defensive lineman Darius Robinson, right, in the first half of the Armed Forces Bowl NCAA college football game in Fort Worth, Texas, Wednesday, Dec. 22, 2021. (Emil Lippe/AP)

In the all-important Commander in Chief’s Trophy series, Army’s seniors have gone 3-1 against Air Force and 2-2 against Navy. West Point won the coveted trophy in 2018 and 2020 and retains possession for another year with this season’s three-way tie.

“They’ve done a great job,” Monken said. “To be able to go to three bowl games, to bring the Commander in Chief’s Trophy home twice, it was a great accomplishment for them.”

Monken said the senior leadership was evident from the moment the 2020 season concluded.

“Just the way they led this team over the last year, from the time we came home from Memphis after the Liberty Bowl to now,” he said. “The way they’ve led this team has never wavered in terms of holding the standard, and those are the guys that drive it. I can try but it’s the players that have got to do it and they have. They just have been very demanding of each other and themselves ... and driving the culture in our locker room and our program. So it’s a great class.”

“We’ll miss those guys,” he added.