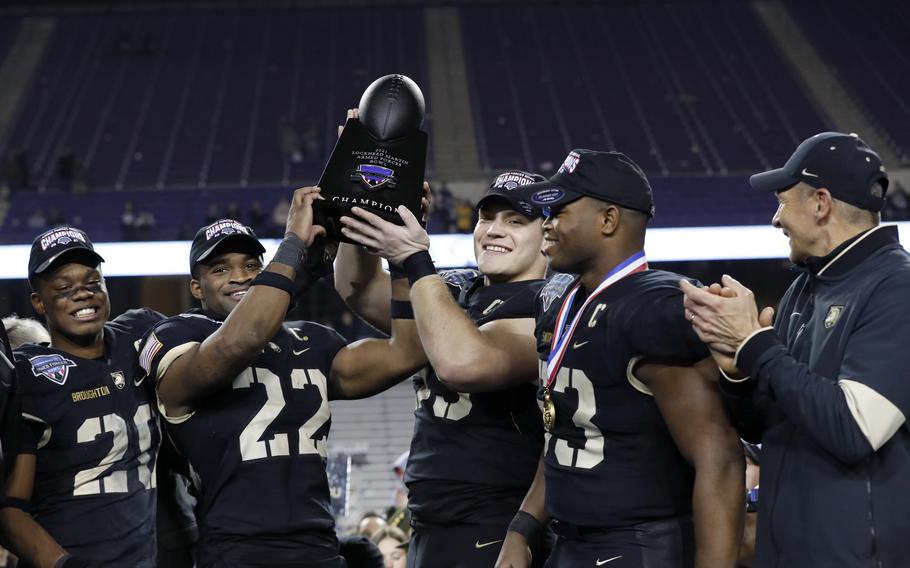 Army celebrates after a 24-22 victory against Missouri in the Armed Forces Bowl in Fort Worth, Texas, on Dec. 22, 2021. (Army Football/Twitter)

(Tribune News Service) — It was the type of situation that most young athletes dream about.

Cole Talley is the first to admit he didn’t have the greatest season as Army’s kicker. But when the opportunity arose to cap off one of the most stirring come-from-behind wins in team history, he was ready.

The ball was set on the left hash mark at the 24-yard-line. Three seconds remained. Talley flexed once or twice after marking off his steps for a 41-yard field goal. His kick started off left, slowly made a fade away from the danger of the left goal post and sailed true. For a kicker whose season best was only 33 yards, this one would have easily scored from about 55.

The kick lifted Army to an improbable 24-22 victory over Missouri, keeping the Black Knights’ record perfect in four visits to the Armed Forces Bowl in Fort Worth, Texas.

Talley thrust his arms up in celebration and then jumped into the arms of trusty holder Brooks Hosea, one of 27 senior players who went out a victor. Then Talley pulled his best Jim Valvano imitation and ran into the arms of everyone he could find.

“Oh man, I never had a feeling like this,” Talley said moments after his winning boot. “I never kicked a game winner in football, high school or here.”

Army (9-4) was put into the worst possible position. Missouri freshman quarterback Brady Cook shook off the frustration of three failed second-half possessions by driving the Tigers 83 yards on 11 plays as time wound down. Cook complete seven throws, the last a 6-yard dart to Keke Chism on the back edge of the end zone for a 22-21 lead. But then came the one throw that proved most costly, overthrowing a wide-open Dawson Downing on a conversion pass.

Making his first collegiate start in place of 11-time starter Connor Bazelak, Cook was named the Missouri MVP for the game, completing 27 of 34 throws for 238 yards and one interception. The Tigers played without a number of starters, including the nation’s No. 3 rusher, Tyler Badie, who had amassed 1,604 yards. An NFL prospect, Missouri coach Eliah Drinkwitz decided it best to hold Badie out of playing to protect his health. Badie dressed in sweats and mingled with his teammates during the game.

That gave slim hope for Army, which had already lost starting quarterback and newly commissioned Second Lieutenant Christian Anderson to a right ankle injury. Backup Tyhier Tyler staked Army to a 21-16 lead five minutes into the fourth quarter, finding a wide open Brandon Walters on a fourth-down call from 14 yards out. But Tyler is not known as a gunslinger and his option runs have not been productive in recent games.

So coach Jeff Monken turned to senior Jabari Laws, who has not taken significant snaps in two months. A former starting quarterback for the Black Knights, Laws has proven to be Army’s touchstone for resiliency, battling back from knee surgeries in 2019 and 2020 to put himself in the mix as a No. 3 quarterback behind Anderson and Tyler.

Laws needed to get Army into field goal range, starting at his own 25 and with 71 seconds on the clock. Monken thought his best play was the first snap, a 13-yard burst up the middle on a draw play. Laws believed his best play was a curl route to Isaiah Alston that went for 11 yards, when eight was needed, on a third-down call with 19 seconds remaining.

Laws rushed the ball to the left hash mark at the Missouri 24 and Monken called time out with three seconds remaining. Talley said he had lifted his head and turned his hips on a 43-yard attempt in the first quarter, that sailed just wide left. No one on the sideline had even spoken to Talley for some time, which was fine by him as that allowed him to focus on his task. This time, he kept his head down, swung his leg properly and the field goal was good.

Facing their home-state Missouri team, three products of the Show Me State did just that. Jakobi Buchanan (21 carries, 68 yards) and Tyson Riley (6 carries, 34 yards) established a fullback attack that accounted for 34 carries and 134 yards. Punter Zach Harding averaged 44 yards on three attempts, including a 55-yarder in the fourth quarter that buried the Tigers at their own 2.

Buchanan was the model of consistency, extending his career-long streak of not getting stopped for negative yardage to 258 carries. His 11th rushing touchdown was perhaps the most vicious run of his season, a 10-yard burst up the middle where he stiff-armed one defender halfway to his destination and dragged a second just across the chalk line, pulling Army within 16-14 with 6:35 left in the third quarter. It couldn’t have come at a better time as Anderson injured his ankle a play earlier and Tyler was called upon to take over.

Army’s defense stopped Missouri for the first time, stringing out Dawson on a fourth-and-one call. Taking over at his own 44, Tyler guided Army on a 13-play drive, with Buchanan doing most of the dirty work. Missouri’s defense tightened up and forced Army into a fourth-and-2 call. Monken briefly toyed with the idea of kicking a field goal but stuck to his analytics chart. Following a time out, Missouri put eight men in the box, allowing Walters to cut diagonally behind two defenders and finding himself wide open for Tyler’s first touchdown pass of the season from 14 yards out as Army took a 21-16 lead with 10:20 to play.

Anderson completed three of four throws for 60 yards, dropping a 42-yarder in stride and over the shoulder of Tyrell Robinson, who was otherwise bottled up all game. Anderson had eight carries for 33 yards, including a 22-yard run behind the down-field blocking of Buchanan to pull Army within 10-7 early in the second quarter.

Visit The Times Herald-Record at www.recordonline.com