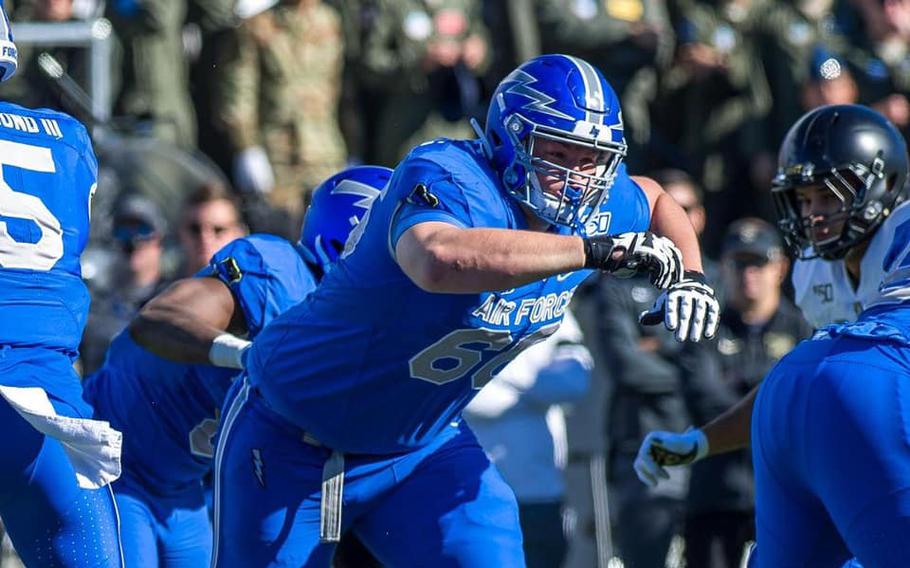 For more than a month, Nolan Laufenberg was without a status. The former Air Force Academy offensive lineman signed with the Denver Broncos in May as a college free agent, but was released before the start of the NFL season, leaving him without a football home and little certainty beyond the game. Such is the life of NFL free agency.

But Laufenberg's career path isn't that of a typical player.

But when football does end for him, Laufenberg has a second career waiting — in the United States Space Force, a new military branch established in 2019 when former president Donald Trump signed a $738 billion defense spending bill. In fact, Laufenberg was set to become an acquisitions officer in the Space Force, based in California, before the Broncos called.

"Just in the broad scheme of things, I think it's cool the possibility that space brings to the military in general and how the world is evolving nowadays," Laufenberg said. "So I felt like it would be a cool thing to be a part of that new kind of race to see who can become the most advanced in space and stuff like that."

In 2021, Laufenberg was one of four football prospects from the military academies — along with Army's Jon Rhattigan, Air Force's George Silvanic and, after a controversial delay, Navy's Cameron Kinley — to receive approval from the Department of Defense to defer their postgraduate service and turn pro.

Rhattigan, a linebacker on the Seattle Seahawks' active roster, and Laufenberg are the only ones of the four to still be under contract.

Laufenberg, who is in the Independent Ready Reserve for the Air Force, was granted a five-year deferment of his service, at which point he can either leave football and fulfill his required active duty, or pay back his tuition at the academy (tuition for cadets is taxpayer funded). Depending on when he begins his required service, Laufenberg could still go into the Space Force, or he could be asked to fulfill whatever position is most needed in the Air Force at the time, if he returns in later years.

But the Air Force regularly keeps tabs on his status, he says, and during his free agency in September, discussions had begun about starting his service if a team didn't sign him in the following months.

When Washington did, he quickly shifted his mind-set to navigating a new city, a new team and a new playbook. Transitioning from Air Force's triple option to a pro style offense can often be a steep adjustment for rookies.

"Triple option, you're kind of racing off the ball, not a lot of pass-blocking," Laufenberg said. "So that was definitely one of the biggest hurdles with NFL football that I went through with the Broncos, especially learning technique. The triple-option has a lot of plays, too, and I think I pick up plays pretty well. So learning what to do has been less of an obstacle than how to do it, if that makes sense."

The more significant adjustment: Starting over in the District of Columbia area after spending the entirety of his football career in Colorado. But he arrived to some familiarity. Washington linebackers coach Steve Russ, a standout at Air Force and two-time Super Bowl winner with the Denver Broncos, was the assistant head coach and defensive coordinator at the academy when he recruited Laufenberg in high school.

"Going into a new environment and to have someone you know is always good," Laufenberg said. "He actually lent me one of his cars, which has been huge, because his daughter is actually a freshman at the Air Force Academy right now and they can't have cars there. So they had an extra car for me to drive around until I could get my car out here."

Washington's offensive line has been one of the team's few bright spots this season, allowing only 10 sacks (tied for seventh-fewest in the NFL) while helping its ball-carriers gain 4.55 yards per carry (ninth-most). Over the past month, Laufenberg has received a crash course in Turner's playbook to fulfill a different kind of ready reserve as a practice squad guard.

For now, his focus is football. But the rookie knows eventually, he could don a different uniform in the Space Force.

"Whenever that time comes and I go back, it'll be great," he said. "Obviously going to the Academy and graduating from there, they want to make sure they're getting an Air Force officer out of it, and to be able to fulfill my commitment to them is definitely a big thing while I'm still playing football."