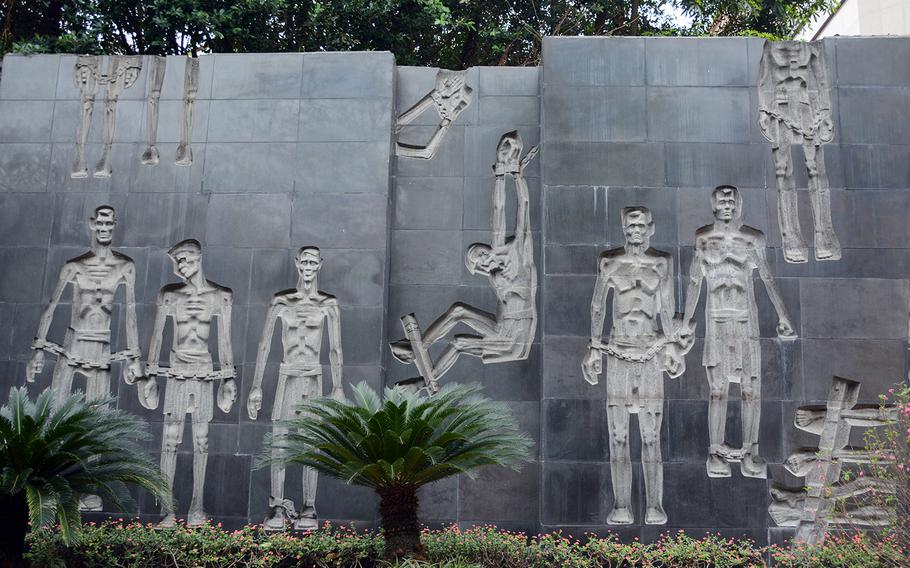 A stone mural memorializes inmates who were tortured and killed at the former Hoa Lo prison, otherwise known as the Hanoi Hilton, which held Vietnamese revolutionaries and later American prisoners of war. (Kim Gamel/Stars and Stripes)

HANOI, Vietnam — American prisoners of war locked up for years in North Vietnam knew the drill. Bow to their captors or take a beating. But in October 1969, the rules changed.

“One guy refused to bow even though the guards screamed at him to,” recalled former Navy Capt. Mike McGrath, who spent six years in the prison known as the Hanoi Hilton. “But this time they didn’t beat him up.”

The inmates quickly relayed the message via the secret tap code they had developed for communicating through the walls, and the guards were met with a domino effect of defiance.

“The word just went through the camps like wildfire,” McGrath said, tapping an example over the telephone during a recent interview. “Everybody quit bowing and they quit torturing.”

Americans captured in North Vietnam in the mid-1960s endured years of brutality and harsh living conditions, kept in bare, dank, concrete cells with little ventilation and largely forbidden contact with each other or the outside world.

The North Vietnamese insisted their captives were participating in an illegal war of aggression and were not entitled to rights granted under the Geneva Conventions.

Often suffering from illness and infections, the prisoners underwent unrelenting beatings, solitary confinement and a particularly savage form of torture known as the Vietnamese rope trick.

The method involved binding a prisoner’s hands behind his back with manacles, then using a rope to rotate them upward until his shoulders and elbows popped out of their sockets.

“The rope trick hurts like crazy and will get you to say anything,” said Robert Wideman, a Navy pilot who was captured after his jet went down in May 1967.

The Vietnamese cracked down even harder after an escape attempt in the spring of 1969, but conditions suddenly began to improve about a month after the Sept. 2 death of communist revolutionary leader Ho Chi Minh.

“The reprisals took place all through the other camps. They started torturing us for our escape plans,” the late Republican Sen. John McCain wrote in a first-person account of his nearly six years in captivity. “The food got worse. The room inspections became very severe.”

“That was a long, difficult summer. Then suddenly, in October 1969, there were drastic changes around the camp,” he said. “The torture stopped.”

Hundreds of American pilots and other troops were captured as the United States implemented a sustained bombing campaign known as Operation Rolling Thunder from 1965 to 1968.

Most were kept in a network of prisons in and around Hanoi, where they were used for propaganda and battered in a bid to force them to confess to war crimes and denounce their government.

As of Dec. 31, 1969, 428 U.S. troops were being held captive — 340 in North Vietnam, 76 in the South and several others in Cambodia, China and Laos, according to statistics extrapolated from the Defense Department’s POW/MIA Accounting Agency’s database.

McGrath, 80, from Monument, Colo., is the historian who analyzes the DPAA figures for NAM-POWs, a nonprofit group for survivors.

He said that 73 of the 735 military POWs recognized by the DPAA died in captivity. Most who made it out alive were part of a mass release by the Vietnamese in 1973, including 566 troops and 25 civilians.

“Two hundred twenty-one of us have died since repatriation. This leaves 441 of us alive today,” he said.

“The treatment got really bad again after the escape attempt,” he said in a recent telephone interview. “But then … they stopped the rope trick.”

“We were still in those crummy little rooms, but we weren’t getting beat up or anything like that,” he said, adding that the food also improved, and the prisoners were moved to compounds with ventilation.

“Before that they had all the vents blocked up so that we couldn’t communicate,” he said.

Several factors likely contributed to the decision 50 years ago to ease the treatment of the POWs.

Vice Adm. James Stockdale, then a captain who had been captured after his A-4 Skyhawk was shot down in 1965, after his return home was awarded a Medal of Honor for his leadership of a POW resistance movement.

In September 1969, Stockdale slit his wrists with shards of glass rather than reveal the names of comrades after he was caught trying to organize his fellow inmates.

“He was subsequently discovered and revived by the North Vietnamese who, convinced of his indomitable spirit, abated in their employment of excessive harassment and torture toward all the prisoners of war,” the Medal of Honor citation says.

The North Vietnamese also freed three American POWs to a visiting delegation of anti-war activists in August 1969. One of those men — Douglas Hegdahl — revealed details about the horrific treatment of his comrades that spurred many spouses to go public with their concerns.

Even before Ho Chi Minh’s death, then-President Richard Nixon, at the start of his first term, had his administration launch a major public relations campaign to demand that the North Vietnamese adhere to the Geneva Conventions, historian Merle Pribbenow wrote in a 2012 dossier for the Wilson Center, a nonprofit policy forum in Washington.

Pribbenow noted that the United States officially raised the topic as part of fledgling peace talks in Paris.

Waiting out the war

A declassified Vietnamese Communist Party document revealed that the party’s leadership “itself discussed the issue of the treatment of the American POWs in the fall of 1969,” he said. “The Party Politburo issued a special resolution providing detailed instructions for improving the treatment and living conditions of the American prisoners.”

It stressed that the men were still not considered by the Vietnamese to be POWs but called on the jailors to apply the points of the Geneva Conventions consistent with humanitarian policies. The improvements included better food, “clean and airy” places of detention, mail from home and protections for their personal effects.

The Nov. 20, 1969, document didn’t provide reasons for the change but the fact that it was issued “indicates the level of seriousness and concern that the North Vietnamese leadership attached to this problem,” Pribbenow said.

McGrath said he remembers clearly the sight of crews showing up in the first week of October with chisels to remove the bricks from the windows and allow a flow of air.

“At the time we were in irons and manacles,” he said. “Our bodies were covered with boils and infections and heat rash and we were being beaten with fan belts.”

The most severe abuse stopped, but it would be four more years before the prisoners were released.

“We continued in a vacuum for the next three or four years,” McGrath said. “We just waited out the war. It was better because they weren’t torturing us, but there was no optimism about when the war was going to be over.”