From the archives, 2010: Zanesville remembers 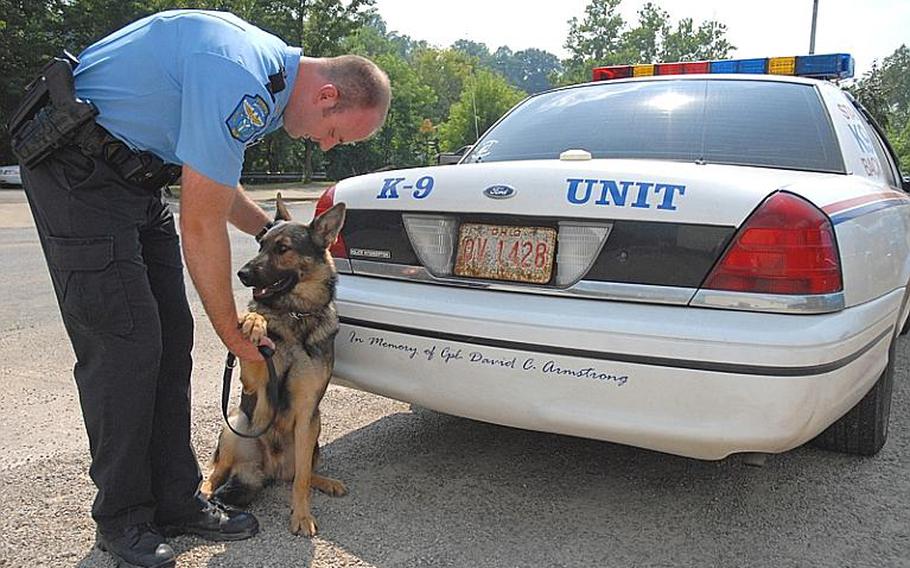 Officer Mike Schiele with Tino. The community raised $15,000 in honor of Zanesville-resident Cpl. Dave Armstrong, who was killed in Iraq, to purchase the department a K9-trained dog and outfit a squad car. The dog, named Bosco, was injured along with Schiele last August in a shooting. Bosco doesn’t work the streets anymore but is the ambassador for the department. A furniture store donated the money to buy Tino as a replacement. (Megan McCloskey/Stars and Stripes)

This article was part of Stars and Stripes’ 2010 special five-day report “The Long Goodbye,” published as a five-day series Aug. 16-20, 2010, as U.S. combat troops exited Iraq. Stars and Stripes wrote about the series:

The below article was the final installment of the series and was published August 20, 2010. It is republished unedited in its original form.

ZANESVILLE, Ohio — The Iraq war got personal here when a white-gloved hand knocked on the door at 315 Taylor St., and then across the river at 3295 Moxadarla Drive, and then a little ways north, at 9255 Dresden Road.

All told, this small Midwestern city and its environs in Muskingum County lost seven local sons in Iraq between 2003 and 2008.

Steve Harper was on the other side of the door in the village of Dresden when the solemn knock came. His son, Bradley, 25, a Marine sergeant, was one of 14 Marines and Navy corpsmen killed in Anbar province Aug. 3, 2005, when their vehicle struck a huge roadside bomb fashioned from three anti-tank missiles.

“Brad’s death changed our lives forever,” Harper said. “But one of my biggest concerns is: Will America remember?” The Zanesville library has a copy of “Takedown,” an action-suspense book featuring a character named Brad Harper after one of the city’s local sons killed in Iraq. Sgt. Brad Harper, a Marine reservist, was a Virginia Beach, Va., police officer, and after his death his fellow cops were at an auction where the character name was being put up for bids. Harper’s character has a righteous role in the book, standing up to a superior who wants to torture a suspect. The book has been checked out 57 times in Zanesville. (Megan McCloskey/Stars and Stripes)

For most Americans, the war in Iraq was an abstract concept in a faraway land, something to tsk-tsk about over coffee. Without a draft, neighborhoods didn’t look like they did during World War II and Vietnam, when nearly every block had at least one house with a blue star in the window signifying a son away at war. The burden of fighting in Iraq was shouldered by a fraction of 1 percent of the U.S. population.

Small cities and towns like Zanesville, a central Ohio community of 24,000, felt the weight of the war more heavily. Nearly half of the first 3,100 casualties in Iraq hailed from places with fewer than than 25,000 residents — and one in five came from towns with no more than 5,000 people, according to a 2007 Associated Press analysis.

This summer at Zanesville’s community auditorium, a painting of Bradley Harper is part of an exhibit featuring 23 Marines who were killed serving with an Ohio-based reserve unit. Several thousand people visited during the first week, said John Kunkel, the auditorium manager and the man who brought the show to town. “When I saw the paintings on the news of our Ohio boys, I called the artist right away,” he said. “I knew that people here would be touched by the work.”

Some left behind tokens at the base of the paintings, he said, “like the Vietnam Wall.”

Pittman moved here nearly 20 years ago when her now-retired Air Force husband was stationed with the local Air National Guard unit. The 51-year-old runs Operation Spirit Inc. Troop Support Ministry, which has shipped care packages to soldiers deployed in Iraq and Afghanistan since 2003. 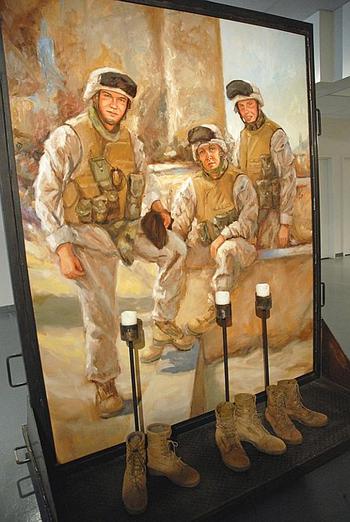 An exhibit of eight paintings featuring the 22 Marines killed with Company L, 3rd Battalion, 25th Regiment based in Columbus, Ohio is on display this summer at the Zanesville auditorium. Sgt. Bradley Harper, from Dresden, Ohio, just north of Zanesville, was killed while attached to the unit in 2005. The artist recently added his portrait to the exhibit. (Megan McCloskey/Stars and Stripes)

“Support the troops” may be a bumper sticker across much of America, but in Zanesville, it’s a mission.

Pittman started out of one room in her house, with a couple of bubble mailers and a few books. As she began sending more and more packages — sometimes skipping haircuts to cover shipping costs — others in Zanesville started contributing. Donations started appearing on her front porch.

Seven years later, at a time when dwindling donations have forced many support efforts to drastically cut back, Pittman’s operation is still growing. This year she opened a thrift store to sell the donated clothing she receives to raise money for Operation Spirit.

Pittman doesn’t believe her efforts would have been so successful outside of Zanesville. That’s because the working-class culture here binds an already close-knit community. 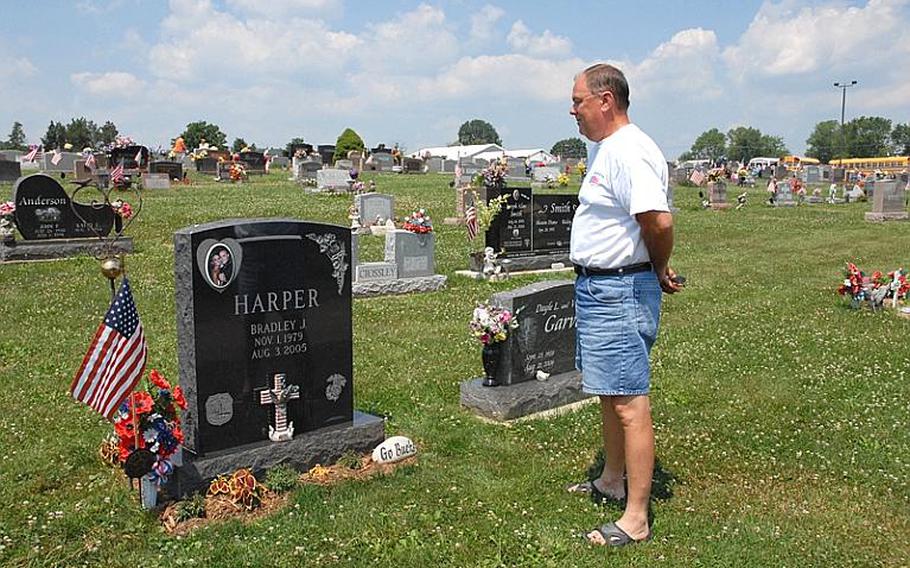 Steve Harper stands at the grave of his son Brad Harper, who was killed in Iraq in 2005. The cemetery in Dresden, Ohio, just north of Zanesville, overlooks the football field where Brad played in high school. The school has his away jersey framed in the commons. Steve Harper and his wife, Janet, visit a couple of times a week. They sometimes find mementoes left by others, such as a Marine Corps dog tag. (Megan McCloskey/Stars and Stripes)

“I think when people know need, they’re more apt to help those in need,” said Pittman, who tears up when talking about helping the troops. “People contribute any way they can.”

Like Jennie Collins, who doesn’t have a lot of money to spare but donates $5 every week and makes homemade cards. Or Esther Lewis, an elderly woman who clips coupons and mails them every week to Pittman.

Some juvenile offenders do their community service at the thrift store, and those who can’t afford to donate money sew pillowcases or make fleece blankets to send. And the troops remember.

In July, a soldier drove from Washington state across the country to Zanesville to thank Pittman and others for remembering him while he was deployed twice to Iraq. Staff Sgt. Trevor Dodge told the local paper that he received support from people in other cities but nothing compared to Zanesville.

A place that takes care of its own

Zanesville is quintessential middle America. Most of the modest houses in the area, at the confluence of two rivers at the edge of Appalachia, have front porches with American flags, where people sit in the evenings drinking sweet tea. Largely blue collar, the city’s median household income is about half the national median of $52,000. The downtown is shabby and largely deserted except for the handsome churches that pop up, sometimes three in a row, along streets lined with boarded storefronts.

It’s a place that takes care of its own — and where everyone remembers.

Patriotic themes are common in Zanesville, Ohio. This mural is painted on the side of a business on Main Street in downtown. (Megan McCloskey/Stars and Stripes)

There’s an Air National Guard unit based in Zanesville, as well as the Army Reserve 660th Transportation Company. When that unit returned from a deployment to Iraq in 2005 four men short, the city of Zanesville mourned with them, claiming those who were killed even though they weren’t from the area.

On the bank of the river at the end of Market Street, Zanesville has built memorials for its war dead from each conflict since the Civil War. The combination of geography and traditional values makes Zanesville “very condusive to patriotic attitudes, often fervor,” said local artist Alan Contrill, who sculpted the memorials.

Those who are wise, Pittman said, “do not talk poorly about our troops.”

With a substantial veteran population — the American Legion chapter here is one of the 10 largest in the state — military memorabilia abounds: bumper stickers on cars, baseball hats on the morning regulars at Donald’s Donuts and service flags, like the Marine Corps banner that Vietnam vet Frank Paynter features in the front window of his downtown restaurant, Dixie’s Diner.

A memorial for those from Muskingham County, Ohio, who were killed in the Iraq War. It’s on the river bank near downtown next to one for Vietnam casualties and other memorials honoring the local war dead since The Civil War. (Megan McCloskey/Stars and Stripes)

Dave Armstrong painted a gigantic American flag on the aluminum siding of his house to welcome his son, Army Cpl. David Armstrong, home from basic training in 2005. The younger Armstrong had wanted to be a K-9 police officer when he got out of the service.

Today, one of the Zanesville Police Department’s 12 cruisers has “In Memory of Cpl. David C. Armstrong” along the back bumper, and a giant Dutch shepherd named Bosco in the back seat. To honor Armstrong, the community raised $15,000 to give the police a second K-9 unit, something that was on its wish list but beyond its budget. The annual Armstrong benefit continues to raise thousands for the department.

North of the city, as the land stretches into more rural space, people still marvel at how silent the crowd was when Bradley Harper’s body was brought home. At least 3,000 people showed up at midnight to follow the procession down Main Street to the funeral home, walking behind the police-escorted hearse carrying candles.

There was wax on the pavement for months. Melodie Pittman organizes wares for sale last month at her Zanesville, Ohio, Twice-Loved Thrift Store, the profits of which go to support Operation Spirit Inc. Troop Support Ministry that sends care packages to troops deployed downrange. Pittman’s efforts started in 2003 when she mailed books to troops through www.booksforsoldiers.com with the username “somebodysmother.” (Megan McCloskey/Stars and Stripes) 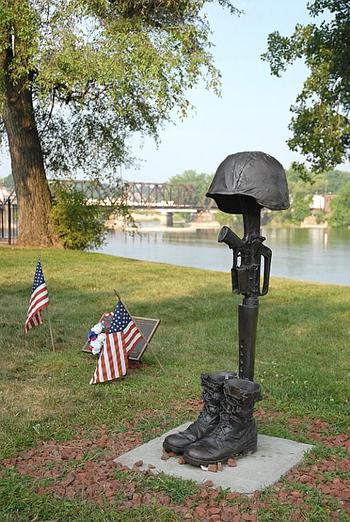 A memorial for those from Muskingham County, Ohio, who were killed in the Iraq War. It’s on the river bank near downtown next to one for Vietnam casualties and other memorials honoring the local war dead since The Civil War. (Megan McCloskey/Stars and Stripes)