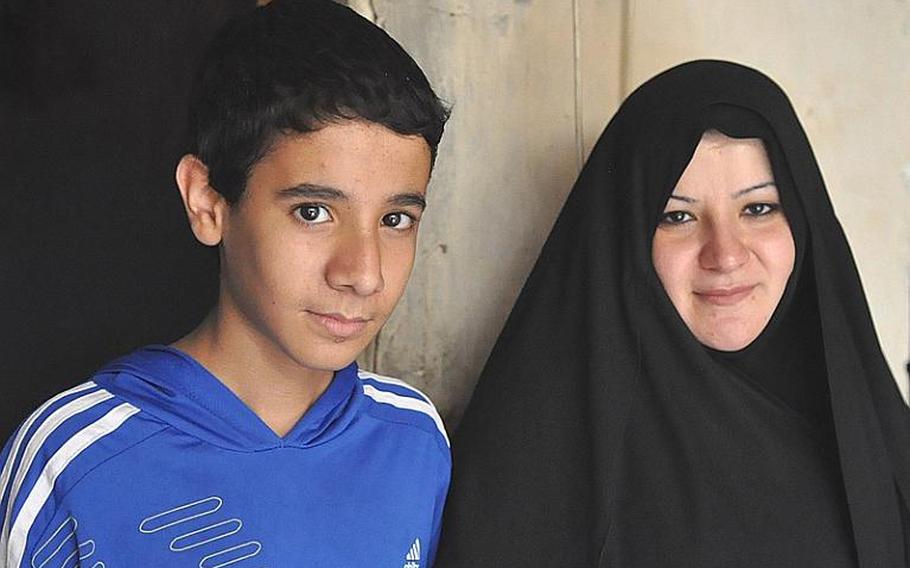 Aklas Farhood, whose husband was killed in a Baghdad bombing, stands with her son Gafor, 12, in front of the tiny room that they share with Gafor's older brother. (Michael Abrams/Stars and Stripes)

BAGHDAD — The powerful explosion threw Aklas Farhood to the ground.

It was Feb. 3, 2007, and Farhood was at home in Sadriya, a Shiite section of Baghdad, putting on her abaya to visit her husband’s small food shop in the nearby marketplace.

She got up and ran to find him. Amid the mayhem, Farhood saw her husband’s shop on fire, and fainted.

At first, Farhood was told her husband of 20 years was in the hospital. But it wasn’t true. Saduk Mohammed Hassan had been killed, along with at least 135 others in a massive suicide truck-bombing. The bomb, estimated to have weighed a ton, injured some 340 more people, brought down a dozen buildings and shops and obliterated market stalls. It happened during some of the worst of Iraq’s sectarian violence. Who was responsible was never determined.

“I don’t know who to blame — some cruel, unjust people,” Farhood said. “I pray they will get their punishment.”

In an instant, Farhood became a member of what one Iraqi official has called “an Army of widows,” one of perhaps a million women left alone after years of war, without a husband’s protection in a patriarchal society, and often destitute, relying on relatives, neighbors and mosques for their meager living.

Like many of those widows, Farhood is poor, and Shiite, with children to support. Like many, she has little education or training and no job. And like most, she receives no aid from a government that remains unable or unwilling to help its most vulnerable citizens.

“We depend on God only,” she said through an interpreter.

“It is always in my mind: What will happen tomorrow?” Farhood continued, her eyes welling with tears. “Where will we get money? I’m always thinking that one day we will wake up with nothing to eat.”

Life has never been easy for most Iraqis. But Farhood never imagined it would be like this.

She had been excited by the idea of the Americans coming to Iraq. She liked what she’d seen of Americans, mostly in the movies — she finds Tom Cruise quite attractive — and believed they were very powerful.

“With Saddam [Hussein], we were always living in fear,” she said. “We looked to the Americans as someone who could help build a new Iraq. [We thought] maybe we could start a new life.”

As a girl, Farhood said she had dreamed of being an independent woman, earning her own money and traveling to many places. But her family was poor — her mother was a widow — and she married a cousin, as is customary, when she was 16 and he was 29.

Hassan made her quit school to keep house, like most Shiite wives. But he was kind and passionate, she said, and she loved him.

“Sitting at night and talking …,” recalled Farhood, 35. “Even if he was exhausted, he would kiss me and talk to me and tell me sweet words. Even though we had been married so long.

“Even now, when I come home, sometimes I think he’ll be here.”

No one knows exactly how many widows there are: Iraqi officials have estimated that one in 11 women ages 15 to 80 are widows. A United Nations report estimated that in 2006, nearly 100 women were widowed each day.

The Iraqi government has a stipend program for widows and their children, but few of them receive it, although those numbers, too, are unclear.

Salem Gomaq Abed, a manager at the Ministry of Labor and Social Affairs, which was in charge of widows’ stipends, said 320,000 widows receive state aid, about $85 a month on average, depending on the number of children they have. But other reports have said that only 120,000 widows receive a stipend, amounting to about $50 a month.

“The budget is very small,” Abed said. “We hope they will raise it or those already getting paid will become wealthy and leave the rolls.”

Some widows lived better under Saddam Hussein, who gave land, cars and pensions to widows whose husbands died fighting in the Iraq-Iran war. But others, whose husbands the dictator killed, got nothing. 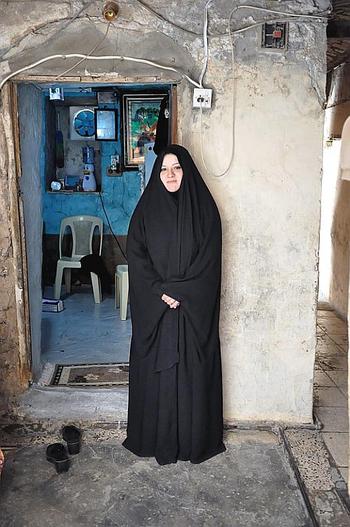 Aklas Farhood, whose husband was killed in a Baghdad bombing, stands in front of the tiny room that she lives in with her two sons. (Michael Abrams/Stars and Stripes) 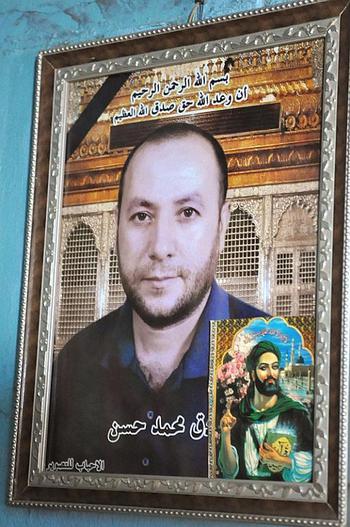 A photo of Saduk Mohammed Hassan, Aklas Farhood's late husband, hangs in the room she shares with her two sons in the Sadriya neighborhood of Baghdad. He was killed in a bombing while at working at his shop. A picture of Ali, the prophet Mohammed's son-in-law, a Shiite martyr, is in the lower right corner. (Michael Abrams/Stars and Stripes) 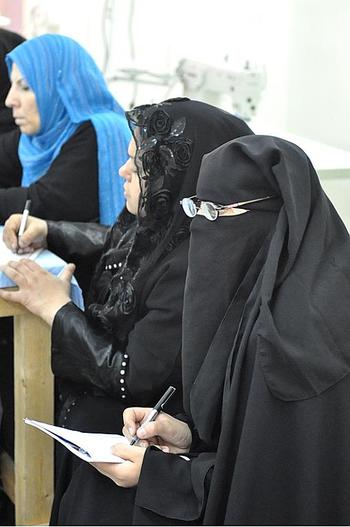 Women take notes during a sewing class at the Development and Training Widows Center in Baghdad. (Michael Abrams/Stars and Stripes)

“Saddam helped with one hand and killed with the other,” said Abed.

Many Iraqis suspect that one reason the country’s widows are given so little is because of widespread government corruption.

Farhood, who said she knows three dozen other widows in her neighborhood, often took a taxi to the ministry office and pleaded for widows’ benefits. Like so many others, she was told repeatedly to come back in a few months. After a while, she gave up.

Fear for the future

After her husband was killed, Farhood said she cried every night for months. She’d wait until her two sons were asleep on their mats beside her in the tiny house she shared with her father-in-law, his second wife and their 2-year-old daughter.

During the day, she tried to be cheerful for her sons.

Each day she feared she or her sons might be harmed, kidnapped or killed in an explosion. The house, already old and crumbling, had been damaged in the bombing, and she worried it might collapse on them all.

But she was more afraid to leave the house. Shiite widows are required to mourn, rarely leaving the house, for four months, according to Islamic tradition. But among her people, Farhood said, “nobody should see a widow’s face for one year.”

She left home just once, completely veiled, in the 18 months after her husband’s death, she said. Along with her sisters and some neighbors, she went to a government ministry to get the money the government was providing the marketplace bombing survivors: $2,100.

It is the only government money she has ever received, and she said most was used to pay off debts.

Since then, she’s survived on the $15 or so a week Ali brings home from occasional work unloading trucks with an uncle, and the help of neighbors and relatives. They have milk for breakfast and rice and bread for dinner, she said. Once in a while, they’ll have chicken.

Ali quit school to work and sees no reason to ever return, his mother said.

“I wanted them to get an education. I wanted to see them do something for the Iraqi people,” she said. “It’s a different plan, before and after.”

Farhood said she considered trying for a government job, but her schooling is inadequate, and those jobs go to well-connected people, or those who can pay bribes.

“I am a strong woman,” Farhood said. “I just need someone to show me the right way.”

The prospects for most Iraqi widows are grim.

Some manage to remarry. Al-Qaida in Iraq this year ordered its fighters to marry the widows of fallen insurgents.

But polygamy has increased, according to Iraqis, along with the number of girls sold into marriage. Younger widows, including teenagers, have been trafficked to other Gulf states, especially Syria, to work in clubs and as prostitutes, experts say.

Farhood said at least half a dozen suitors had proposed marriage to her in the past three years. She smiles when she says this, and covers her mouth demurely with her small hand.

Some men, with wives and children, suggested a temporary “pleasure marriage” that can last a day or less, allowed in Shiite tradition but viewed by Sunnis as akin to prostitution. Farhood would never consider that, she said. Farhood has no interest in remarrying, she said. What if a new husband turned out to be cruel to her or her sons? What’s more, her sons, who gain more authority over her as they get older, would be angry if she remarried.