A short historical lesson on the long-standing practice of cheating 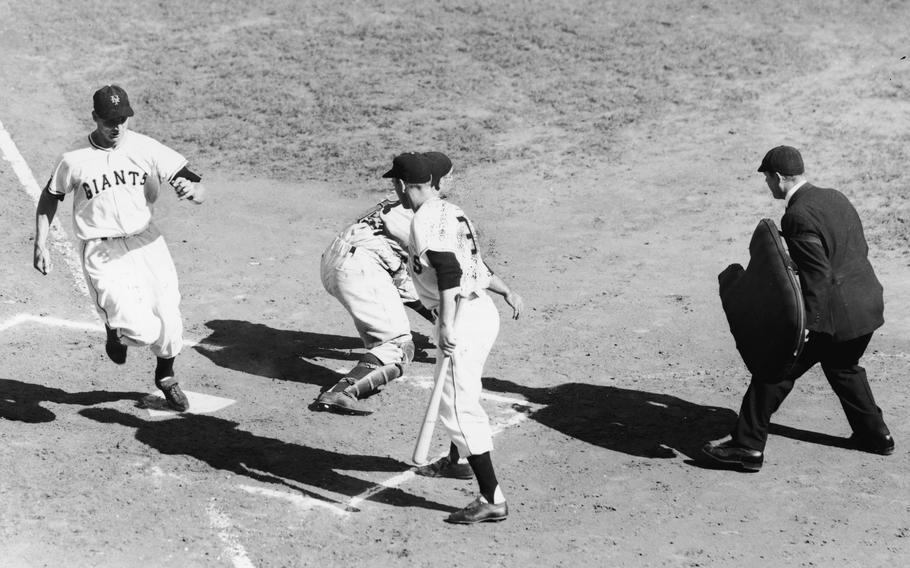 Bobbby Thomson (left) of the New York Giants scores a run in the second inning of game three of the World Series in New York, Oct. 6, 1951. The most famous home run in baseball history is arguably the walk-off by Thomson in the ninth inning of the final game of a 1951 National League playoff series with the Brooklyn Dodgers to clinch the pennant. It turns out the Giants were cheating by stealing the catcher’s signs and relaying them to batters from the scoreboard. Thomson denies seeing this specific signal, but those involved admit they had been telegraphing signals throughout the Giants’ pennant run. (Hulton Archive, Getty Images/TNS)

You don’t generally think of the old fishing hole as a place to cheat, and it’s unusual to see any cheater get indicted, but it happened last week when authorities charged two fishermen in the Lake Erie Walleye Trail tournament. With more than $28,000 in prize money at stake, an investigation revealed lead weights and fish fillets stuffed into the stomachs of fish caught by the two, meant to increase the weight of their catches.

“I take all crime very seriously, and I believe what these two individuals attempted to do was not only dishonorable but also criminal,” Cuyahoga County Prosecutor Michael C. O’Malley said in a news release.

This was one of several high-profile cheating incidents this month. Cheating was alleged in a poker game — nothing new there, considering how poker and cheating have always gone together. But this occurred in a popular California YouTube poker game, a forum “Guys and Dolls” storyteller Damon Runyon never contemplated. One top player accused another of cheating when she called an all-in bet in a game holding cards that anyone else would have folded. Did she know her opponent’s hand? Details are still sketchy, and although she denied the charges, she returned $135,000 in chips to settle the matter. That didn’t, and suspicions remain high.

A claim of cheating also arose in the rarefied world of high-level chess when a low-ranked young grandmaster beat the No. 1 player in the world in a live-board match, an almost unimaginable occurrence. The top player had little doubt cheating was involved, even though it was not obvious how it was accomplished. What made it more suspicious was that the young player had admitted to past cheating in online tournaments and had been banned for a time in 2020.

None of this is new. As long as there has been competition, there has been cheating. Consider the “innocent” 1950s. Amid Elvis, President Dwight D. Eisenhower and Sputnik ran a deep undercurrent of cheating.

The most famous home run in baseball history is arguably the walk-off by the New York Giants’ Bobby Thomson in the ninth inning of the final game of a 1951 National League playoff series with the Brooklyn Dodgers to clinch the pennant. The radio call “The Giants win the pennant!” is a legendary broadcast moment. But it turns out the Giants were cheating by stealing the catcher’s signs and relaying them to batters from the scoreboard. Thomson denies seeing this specific signal, but those involved admit they had been telegraphing signals throughout the Giants’ pennant run.

Most basketball fans are not aware of it, but a college basketball team once won the NCAA championship and National Invitation Tournament in the same year. (Unlike today, teams were once permitted to enter both.) City College of New York, known as CCNY, won both in 1950. A year later, CCNY and other major universities, including Kentucky and Bradley, were implicated in a point-shaving scheme unrelated to the tournaments. A grand jury intervened, careers were ruined, CCNY deemphasized basketball and Kentucky was forced to cancel a season.

And then, of course, there was the highly publicized quiz show scandal. In 1957, Charles Van Doren, scion of one of America’s most prominent intellectual families, became a national celebrity with his success on one of the most popular television quiz shows of the 1950s. In 1959, public faith in quiz shows was nearly destroyed when Van Doren testified before a congressional committee and admitted receiving answers before the contests. (The story of Van Doren and the rigged quiz show was told in the 1994 movie “Quiz Show” starring Ralph Fiennes.)

“Breaking Away” is a poignant 1979 coming-of-age film about a young man with a talent for bicycling who dreams of riding with the Italian national cycling team. When his chance finally arrives, the Italians, contemptuous of this young American who keeps up with them during a ride, sabotage his bike and cause him to have an accident. In the movie’s most touching scene, he returns home after being betrayed by his heroes, disabused of his notions, more hurt emotionally than physically.

Sadder but wiser, he tells his father: “Everybody cheats. I just didn’t know.”

His loving father, who coincidentally happens to be a used-car salesperson, replies tersely: “Well, now you know.”

Cheating is wrong, it’s unfair, it should be condemned, and as “Breaking Away” shows, it inculcates a corrosive cynicism in our young people. The problem is, whether it’s performance-enhancing drugs or deflated footballs, we all have a little larceny in our hearts. The wrestler Eddie Guerrero is famous for saying, “If you’re not cheating, you’re not trying.” And he eventually became a born-again Christian.

As bad as cheating is, there can be some humor in it. Consider the great Baltimore Orioles manager of the 1970s, Earl Weaver, considered an expert on the baseball rules and who took them seriously. He once brought a rule book on the field to point out where an umpire got it wrong. The umpire refused to listen, and an enraged Weaver tore up the rule book on the field in front of the fans, a confetti of rules flying everywhere.

Once when one of his young pitchers had just given up several hits and was facing bases loaded, Weaver came to the mound and said simply, “Son, if you know how to cheat, I wouldn’t wait any longer.”