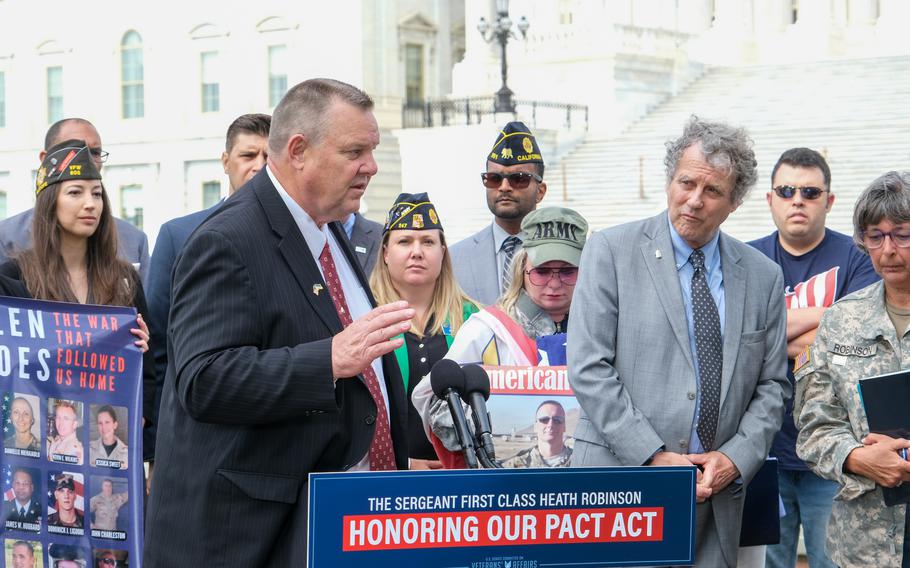 Veteran advocates joined Sen. Jon Tester, D-Mont., chairman of the Senate Committee on Veterans’ Affairs, and Sen. Sherrod Brown, D-Ohio, on Tuesday to push for the Senate to pass the Sergeant First Class Heath Robinson Honoring Our Promise to Address Comprehensive Toxics Act of 2022, also known as the PACT Act. The bill would expand eligibility for health care and benefits to all veterans exposed to burn pits and other toxins. (Photo courtesy of Sen. Jon Tester)

It was four in the afternoon on March 10, 1991, when the first planned explosion of Saddam Hussein’s chemical weapons went off at the U.S. weapons depot in Khamisiyah, Iraq, and the first gray-white smoke cloud that would come to be called The Plume wafted skyward and drifted over the troops. There would be many blasts that day.

Bill Florey, a young and proud-to-serve E-4 specialist, had just parked his truck after a day’s work.

Francesca Yabraian, who would become his friend and would fight the losing battle to save his life (at a time when it seemed horribly clear the Department of Veterans Affairs wasn’t), was just a student half-a-world away. She was in Dallas on that day.

Pat Toomey was also half-a-world away on March 10, 1991. Pennsylvania’s future Republican senator was all into the rich expectations of his first career (in international currency swap transactions and derivatives) when his hopes were shaken. Deutsche Bank acquired the London-based investment bank where he worked, and he didn’t know what to expect. So, he returned to Allentown, Pa., and began a career rich with a different sort of expectations: politics.

What Toomey couldn’t know back then was that, in the summer of 2022, he’d be in a position to shake up the hopes and expectations of thousands who also served in Iraq with the same pride Bill Florey felt on that 1991 day.

Florey was Yabraian’s friend and work colleague when she became concerned about the bump near his right temple that seemed to be growing. His VA doctor said it was just an infection and injected penicillin. It kept growing. So she went to the VA with him and told the VA doctor Florey had to get an MRI that day or they’d have to drag her out! Florey got his MRI. It showed a tumor had penetrated into his brain.

Next it became a problem Washington actually should have solved. The VA denied Florey benefits for a service-related injury, claiming it was “less likely than not” that his cancer was caused by The Plume from Saddam’s chemical weapons. Then Yabraian contacted me about her friend’s plight. It turned out a VA study showed it was actually TWICE as likely as not that Florey’s cancer came from exposure to Saddam’s exploded chemical warheads.

Bill Florey died on New Year’s Day, 2005, before the VA could grant him the benefits he’d earned. And the VA’s bureaucratic rules were that when military personnel die, their unpaid claim for compensation owed dies with them. His tragic story became the beginning of my 2008 book, “Vets Under Siege: How America Deceives and Dishonors Those Who Fight Our Battles,” published by Thomas Dunne Books, St. Martin’s Press.

Sadly, “Vets Under Siege” told many similar tragic tales. But it also proposed solutions; and other investigations and hearings produced many more. One was the Vietnam War-era reform in which the VA began assuming all who served in Vietnam are now presumed to have been exposed to the dangerous defoliation chemical Agent Orange. Vietnam War veterans no longer have to prove they were exposed to Agent Orange to get benefits for illnesses the chemical is known to cause.

And this summer, a new veterans reform bill was being approved with overwhelming bipartisan Senate and House support that assumed that all who were in Iraq — and who suffered cancers or other illnesses known to be caused by Iraq’s chemical weapons — would be presumed to have been exposed to plumes from what the military now calls its “burn pits.”

But suddenly on Wednesday 25 Republican senators reversed their earlier “yes” votes and blocked final passage of that veterans’ care reform bill — just weeks after they’d joined Democrats in approving the bill with 84 votes.

Now Sen. Pat Toomey enters our story. In June, Toomey had objected to an accounting procedure for $400 billion that was in the original bill the Senate had passed and sent to the House. On Wednesday, Toomey resurfaced his objection as a reason to block the bill Republicans had already decisively supported. This time, only 55 senators voted yes; but 60 are needed to prevent a filibuster.

Why did Republicans suddenly switch from yes to no? Democrats charged that for Republicans it was just political spite. Democrats gave President Joe Biden a major victory on a spending bill compromise last week, and they say Republicans didn’t want to give Biden a win on veterans’ care reform too. Toomey, of course, quickly denied that.

But Thursday, The Washington Post reported that the Senate’s No. 2 Republican leader, Sen. John Thune, of South Dakota, said this veterans’ bill vote was “separate” from the overall spending deal, but conceded, about the spending compromise, “obviously it doesn’t help.”

And so it goes in this city. Today, many thousands of military veterans who are suffering from the same exposure that killed Bill Florey are coping with their latest reality: While it is nice when Republicans sincerely thank them for their service, “obviously it doesn’t help” them as they struggle to pay their medical bills and survive.