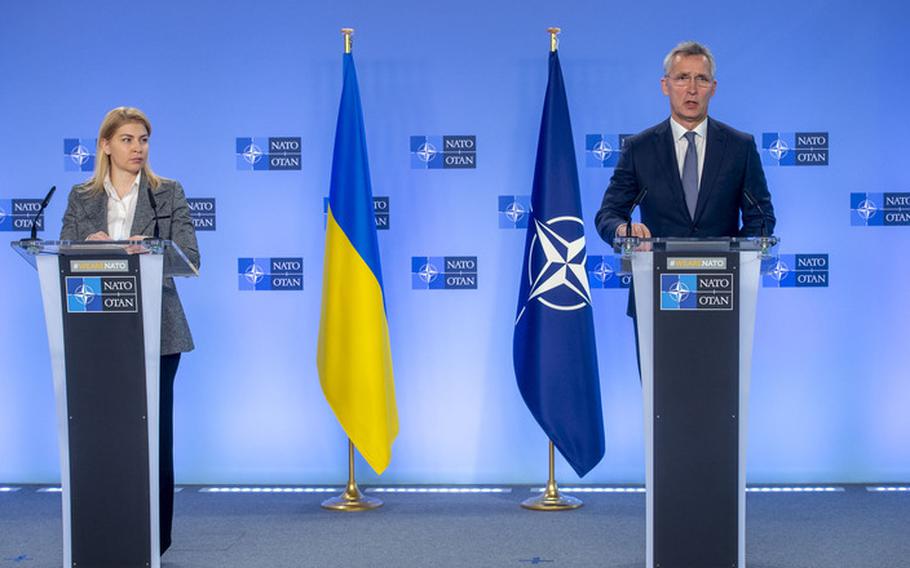 NATO Secretary-General Jens Stoltenberg, right, and Olga Stefanishyna, the deputy prime minister for European and Euro-Atlantic integration of Ukraine, speak to reporters at NATO headquarters in Brussels, Jan. 10, 2022. On Jan. 12, Stoltenberg said the alliance will do what it can to prevent armed conflict in Europe over Ukraine. (NATO)

Tensions are high in Europe. Nearly 100,000 Russian troops have amassed on the border with Ukraine. The Biden administration just announced plans to deploy U.S. forces to Eastern Europe in an attempt to deter another Russian invasion. President Vladimir Putin’s government remains coy, insisting that Russia will not widen the war in Ukraine, while threatening to do exactly that.

Unless, that is, the United States and the other members of the North Atlantic Treaty Organization (NATO) make concessions. Late last year, when Russian troops began to gather at the border, Putin made his price clear: He wanted a clear and binding commitment that NATO would not expand eastward to include nations such as Ukraine.

The current tensions are in large part a struggle over historical narratives. Putin has made no secret of that fact. Much of the Russian case revolves around a particular telling of contemporary history in which the United States and its NATO allies violated an earlier promise not to expand the alliance.

But Putin seems to have forgotten the longer history of NATO-Russian relations: In times of transatlantic turmoil and drift, leaders in Moscow have often been the ones to save the alliance from itself.

Fear of the Soviet Union - of the appeal of communism in economically struggling European nations after World War II and of Moscow’s ability to blackmail their governments - drove policymakers to form NATO in the late 1940s. The Kremlin’s grip on Eastern Europe had solidified and, acutely aware of the social and economic dislocation across postwar Europe, officials worried that states outside the Soviet sphere of influence would not be able to stand firm should Moscow ratchet up the pressure.

Soviet actions seemed to confirm these arguments. In February 1948, the Communist Party seized power in Czechoslovakia, touching off fears that similar coups would follow. The next month, reports from Oslo indicated the Soviets were putting the squeeze on the Norwegians to sign a separate deal that would bring the country into Moscow’s orbit. On both sides of the Atlantic, policymakers concluded that it was time to negotiate arrangements to deter further Soviet expansion. The result: 12 allied nations signed the North Atlantic Treaty in April 1949, including the major Western European powers and the postwar period’s most powerful nation - the United States.

Despite a shared goal, NATO experienced regular bouts of angst about the alliance’s value and purpose - an unsurprising development, given the number of countries involved and the different visions and agendas of its member nations. Yet, time and again throughout the Cold War, leaders in the Kremlin unintentionally brought the allies back together by offering well-placed reminders of the fears that had bound them together in the first place.

Take, for example, the early 1980s. NATO, which had expanded to 16 countries by 1982, seemed hopelessly divided. The Western allies disagreed about the wisdom of a sanctions package designed to punish the Russians for the introduction of martial law in Poland. In capitals across the alliance, governments faced record-breaking public demonstrations in opposition to NATO’s plans to deploy new nuclear missiles to Western Europe.

The Soviet Union and its allies across Eastern Europe were determined to make the most of these fissures, stoking popular opposition to foil the alliance’s deployment plans. But that same Soviet pressure also steeled Western nerves. The Kremlin’s efforts to undermine the alliance were proof positive that Western leaders needed to stay the course and see the deployments through. When NATO did so in the autumn of 1983, it injected a much-needed shot of confidence into the alliance, even as popular unrest continued to give the allies pause.

Surviving this political test emboldened allied leaders to renew their efforts to reach diplomatic agreements with the Soviet Union, not least President Ronald Reagan. After Soviet General Secretary Mikhail Gorbachev arrived on the scene in 1985, the Western allies found someone who they could really do business with going forward.

Cold War tensions began to thaw in divided Europe. But as the threat from Moscow receded and Gorbachev churned out attractive arms control offers, allied officials worried that this new, more friendly line could unravel their own defense policies. A smiling face from Moscow - like Gorbachev’s - was in fact far more dangerous to NATO than a menacing one that could tightly bind the alliance together.

Then, in November 1989, the unthinkable happened: German citizens toppled the Berlin Wall. Events moved swiftly afterward. By early 1990, with the communist German Democratic Republic, a longtime Soviet ally, coming apart at the seams, the reunification of Germany, which had been divided since the close of World War II, now seemed possible. This was a terrifying prospect for Soviet leaders who had not forgotten the German invasions during both world wars. Allied leaders, no less wary of German power, hoped to keep a unified Germany anchored within NATO to ensure that the country did not revert to its former aggressive patterns.

But there were big questions as to whether Gorbachev would accept that outcome. During one February 1990 exchange with the Soviet leader, U.S. Secretary of State James A. Baker III floated a possible path forward, uttering a now-infamous phrase: NATO, he said, would move “not one inch” to the east.

Much of today’s debate hinges on that phrase. Russia maintains that a promise was made not to expand NATO - and the United States violated it. “You promised us in the 1990s that [NATO] would not move an inch to the East,” Putin fumed at a news conference last December. “You cheated us shamelessly.” In practice, successive U.S. leaders felt no such constraints. Since 1990, NATO’s membership has grown from 16 to 30, including movement into Eastern Europe to encompass former Soviet republics and ex-members of NATO’s former communist adversary, the Warsaw Pact.

Even experts steeped in the historical record cannot agree which interpretation is correct. To some, the available evidence indicates clearly that the United States never made a promise. Others come to the exact opposite conclusion: There was a promise not to expand, and the United States broke it. Most fall somewhere in the middle, arguing over things like the difference between verbal pledges and written agreements in the conduct of diplomacy.

But what matters most for the current tensions is not which interpretation of Baker’s remark is correct, strictly speaking. What matters is that this history is so contentious in the first place.

The current dispute between NATO and Russia is a stark reminder that perception often matters more than reality in international affairs. Recognizing that, NATO has tried to counter Russian claims with a website busting Russian myths about the alliance and its intentions, point by point. It flatly denies the Kremlin’s allegation that NATO promised it would not expand, citing bits of the historical record - including assertions made by Gorbachev.

Yet the irony of Putin putting history center stage to justify his belligerent actions is that he may well fall into a familiar trap. He is missing how aggression from Moscow, akin to Russia’s current troop deployments at the Ukrainian border, has often come to NATO’s rescue - injecting new life into the alliance and uniting fractious allies in moments of disarray.

Even a few months ago, NATO seemed listless and adrift. Allied leaders had publicly levied charges that the organization was in shambles, with quips that the institution was “obsolete” or brain dead. Staring down a more contentious relationship with China, observers wondered whether the alliance could adapt to meet these new challenges and priorities. Officials contemplated new missions and new ways to make the alliance relevant, such as floating proposals to focus on pressing global questions like climate change.

Putin’s troop deployments have changed the conversation and made the case that NATO’s original, well-worn mission to contain Russia is still necessary. Not for the first time, the best arguments for NATO have come not from Brussels, but from Moscow.

In this way, Putin’s effort to wage a historically minded battle may have missed the most relevant history of all.

Susan Colbourn is associate director of the Triangle Institute for Security Studies based at Duke University’s Sanford School of Public Policy. She is the author of the forthcoming book, “Euromissiles: The Nuclear Weapons That Nearly Destroyed NATO” (Cornell, 2022).