What Colin Powell taught me about war and optimism 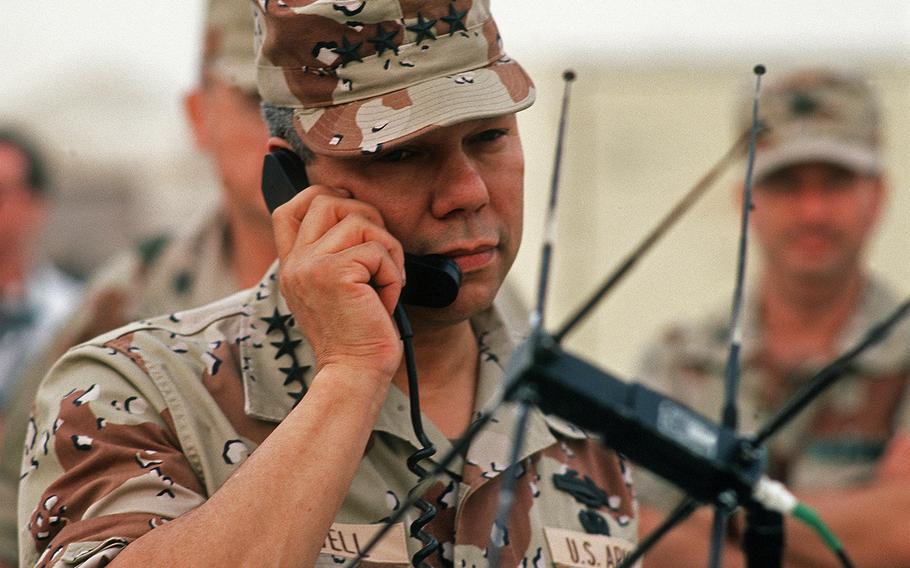 Chairman of the Joint Chiefs of Staff Gen. Colin Powell speaks via satellite to the Pentagon while visiting troops during Operation Desert Shield. (Jeff Wright/U.S. Army)

In 2009, I was nominated to be the 16th supreme allied commander of the North Atlantic Treaty Organization. While I had already served three years heading one of the military’s 11 combatant commands — U.S. Southern Command, focused on Latin America — this new job would be jumping into the deep end of the pool.

For starters, I would be the first Navy admiral to take the job — all my predecessors had been generals with deep experience in NATO. (My dream four-star job was thousands of miles away: commander of U.S. Pacific Command in Honolulu, a traditional posting for a Navy officer.) But Secretary of Defense Robert Gates wanted me in Europe, so off I went.

The other problem was that NATO was engaged in a brutal land war in Afghanistan, with nearly 150,000 troops hundreds of miles from the sea. I was worried about my ability to lead given the complexities of that coalition. When I relayed my doubts to both Gates and Adm. Mike Mullen, chairman of the Joint Chiefs of Staff, they both said, “Go talk to Colin.”

I’d known Colin Powell, who died Monday of complications from COVID-19, since I was a young commander and he was the Joint Chiefs chairman. Gen. Powell — to those of us in uniform, he will always be Gen. Powell, not Secretary of State Powell — had always been generous with his time and advice as I moved through more senior positions. This included when I was senior military assistant to Secretary of Defense Don Rumsfeld in the early 2000s, a job Powell had held in the 1980s under Secretary Caspar Weinberger.

As I knocked on the door of his home in the Washington suburbs, I hoped he could boil down for me the key elements of leading a large coalition in combat, dealing with the diplomatic elements of NATO and the other allies, and handling the personal pressure and challenges. We spent a couple of hours together, and at the end of it, I walked away reassured and thinking more optimistically than I had since I’d learned of the assignment.

First, he said, you need to park your ego at the door. You’ll be treated like royalty in the job: a stately Belgian chateau set on a couple of dozen acres; the biggest security detail in the armed forces (Belgian and U.S.); your personal set of Black Hawk helicopters; the best Gulfstream jet; a chef and staff to run the diplomatic entertainment; and on and on.

“Remember who you are, Stavridis,” he said. “You’re not being sent over there to be the 21st-century version of Charlemagne.” Humility, so much at the core of Colin Powell, the son of Jamaican immigrants and graduate of a City College of New York, was job one.

Next, keep running the traps. (Military-speak for staying on top of everything.) Powell was famous for this in every job he ever had, constantly picking up the phone to take the temperature of senior military colleagues, civilian peers in other agencies, the Washington media, foreign counterparts, friends over the decades. His network was endless, and he paid for information and intuitions with his own ideas and advice, creating a mosaic of each challenge, filling in the little colored stones until the picture emerged. A good NATO commander, he told me, is an intelligence officer who gathers the needed information a bit at a time.

Third, to keep a coalition together, you must put yourself in the other guy’s shoes. He said to stop and think about the history, culture, language and, above all, the demands that your counterparts are facing — in Paris, London, Berlin and Rome, of course, but also in the smaller capitals of countries like Slovakia, Slovenia, Estonia and Belgium. And the same goes for Moscow — get there fast and talk to the Russians about their experiences in Afghanistan.

Finally, stay optimistic. If you look at Powell’s “13 Rules for Success,” which I cut out and kept under the glass on my desk in Belgium, four of the 13 pertain to optimism: It will look better in the morning (#1); It can be done! (#4); Don’t take counsel of your fears or naysayers (#12); Perpetual optimism is a force multiplier (#13).

Then he signed a couple of copies of his remarkable memoir, “My American Journey,” and sent me on my way. Four lessons in two hours: humility, connectivity, empathy and optimism. A pretty good prescription, and so often over the next four years, and the decade since, whenever I’ve faced a challenge, I think of Colin Powell. Godspeed and open water to you, general.

James Stavridis is a Bloomberg Opinion columnist. He is a retired U.S. Navy admiral and former supreme allied commander of NATO, and dean emeritus of the Fletcher School of Law and Diplomacy at Tufts University. His latest book is “2034: A Novel of the Next World War.”