Powell praised by US politicians from both parties as trailblazer, trusted adviser to presidents

WASHINGTON — U.S. politicians from both parties on Monday remembered Colin L. Powell as a highly respected public servant, trusted adviser to presidents and statesman upon learning that the former secretary of state and chairman of the Joint Chiefs of Staff had died of complications from COVID-19.

“Many Presidents relied on General Powell’s counsel and experience,” former president George W. Bush said in a statement. “He was such a favorite of Presidents that he earned the Presidential Medal of Freedom — twice. He was highly respected at home and abroad. And most important, Colin was a family man and a friend.”

Powell served as secretary of state under Bush — a tenure that was marred by a 2003 appearance before the United Nations in which Powell cited faulty information in seeking to make the case for U.S. war against Iraq.

That episode was largely set aside Monday, however, as tributes poured in for a man whose career in public service began when he was a soldier in Vietnam.

“Simply stated, Colin Powell was a great general, a distinguished combat soldier, an outstanding statesman, and an inspirational leader whose transcendent presence served as a beacon and a rock to present and future generations,” he tweeted.

“It is hard to imagine a more quintessentially American story: A son of Jamaican immigrants who learned Yiddish from his boyhood neighbors in the Bronx becomes a four-star general in the United States Army and serves four presidential administrations, including as National Security Advisor, the youngest-ever Chairman of the Joint Chiefs of Staff, and the first Black Secretary of State,” he said in a statement.

Senate Armed Services Committee Chairman Jack Reed, D-R.I., said Powell “was resolute and honorable throughout his life and career, and America is fortunate to have benefitted from his leadership.”

In a tweet, Sen. Mitt Romney, R-Utah, remembered Powell as “a man of undaunted courage and a champion of character.”

“A statesmen & trailblazer, devoted to America and the cause of liberty, Colin Powell’s legacy of service & honor will long inspire,” Romney said. 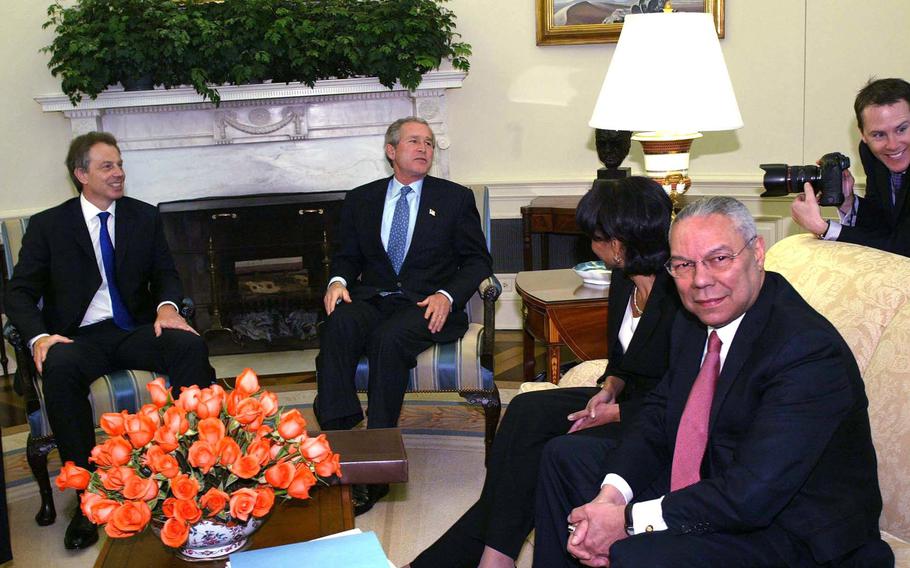 Powell was the first African American to serve as secretary of state and as chairman of the Joint Chiefs of Staff. He was urged at several points to run for president but never mounted a bid.

“America needs more leaders like him at this moment, people willing to put nation over party and to call us together,” Sen. Christopher Coons, D-Del., said in a statement. “Colin was truly a class act, who loved our nation deeply and who worked diligently in service to our country in key diplomatic, national security and public service roles over several decades. His loss will be felt by all who served with and learned from him.”

“General Powell had a remarkably distinguished career, and I was fortunate to work with him,” Cheney said in a statement that noted Powell’s service in Operations Desert Shield and Desert Storm, among other things. “Colin was a trailblazer and role model for so many: the son of immigrants who rose to become National Security Advisor, Chairman of the Joint Chiefs, and Secretary of State.”

Jaime Harrison, chairman of the Democratic National Committee, said he had been personally moved by Powell’s achievements.

“As a young Black man, I was inspired by Secretary Powell, who showed there is no limit to what we can be or achieve,” Harrison said in a statement.

Sen. Tim Scott, R-S.C., the only Black GOP member of the Senate, also credited Powell for having broken “countless barriers along the way.”

On Twitter, Sen. Patrick Leahy, D-Vt., called Powell “a wise, decent & generous spirit” and noted that Powell got married on the same day that Leahy did.

“He & Alma were married on the same day that we were and most yrs on that day we’d talk with & tease each other,” Leahy said. “Our hearts are heavy & our thoughts are w/ Alma & their family.”

Defense Secretary Lloyd Austin, the nation’s first Black defense secretary, called Powell “one of the greatest leaders that we have ever witnessed.”

“Alma lost a great husband, and the family lost a tremendous father, and I lost a tremendous personal friend and mentor,” Austin told reporters. “He always made time for me, and I could always go to him with tough issues. He always had great counsel. We will certainly miss him. I feel as if I have a hole in my heart.”

“Quite frankly, it is not possible to replace a Colin Powell,” Austin added, noting Powell’s trailblazing status as the first African American chairman of the Joint Chiefs of Staff and as secretary of state.

Despite his controversial role in selling the Iraq War, Powell was broadly popular within the State Department for the attention he paid to the needs of the men and women of the Foreign Service.

“Few secretaries have devoted as much time and energy to ensuring that the professional career Foreign Service was properly staffed, resourced, consulted, and respected,” the AFSA said in a statement. “For that, Secretary Powell will always be remembered with great affection and appreciation.”

Remembrances of Powell were also shared by those with whom he worked around the globe.

Jack Straw, Britain’s former foreign secretary and Powell’s counterpart, called him “a brilliant diplomat because he always had time for people.” They last exchanged messages a month ago.

Powell was “indefatigable in the amount of work that he put in. My wife nicknamed him ‘the other man in her life’” because he used to call at 11 p.m., Straw said to the BBC.

He said that Powell regretted the way he presented the case for the invasion of Iraq: “He did regret it, as did I.”

“He felt rather personally that this had been a blight on an otherwise impeccable reputation,” Straw said, “but it is my belief that people will see his career in the balance and put that against all his other extraordinary achievements.”

“He could have been president,” Straw said. He said he and Powell talked “a number of times” about his decision not to run and that “the reason, he told me … was because of his wife.”

The Washington Post’s John Hudson in Washington and Karla Adam in London contributed to this report.