A governor can send the National Guard out of state; can a wealthy donor? 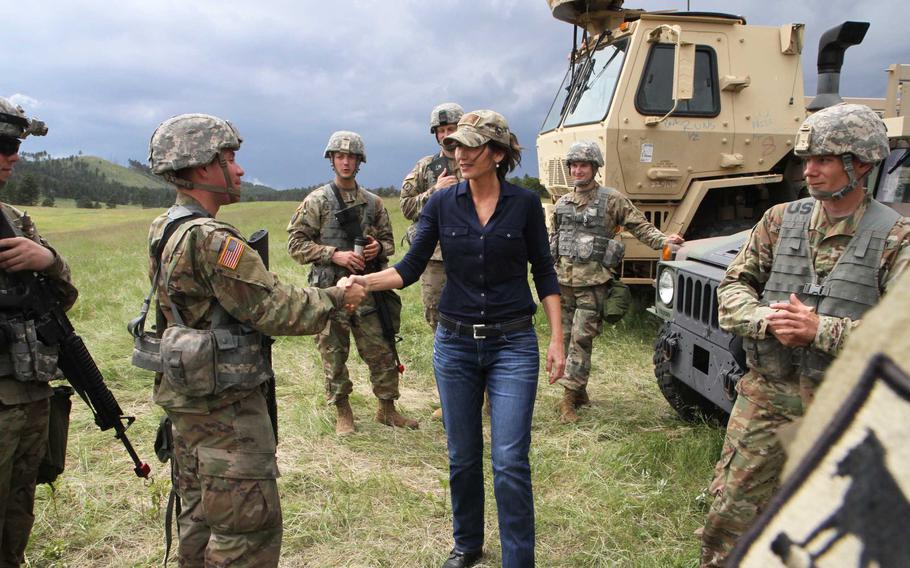 When Gov. Kristi Noem, R, announced recently that she would send 50 South Dakota National Guard soldiers to Texas at the expense of a private donor, criticism was swift. Arkansas Gov. Asa Hutchinson, a fellow Republican, said Noem had set a "bad precedent." Rep. Adam Smith, D-Wash., the chair of the House Armed Services Committee, said the Guard was being used as a "private militia." A South Dakota Republican state lawmaker wondered if the Guard was being used as "hired mercenaries," and a historian at the South Dakota National Guard Museum told the Associated Press that "this kind of floors me."

What the critics weren't able to say was that Noem broke the law. Perhaps the most disturbing thing about her action was that it was probably legal. If Americans don't like the message that sends, they will have to close the loopholes that make it possible to place decisions about when and where to use military forces into the hands of billionaire donors like the one funding Noem's mission.

But the federal government's use of private donations for a military deployment could be a violation of the Antideficiency Act, which prohibits agencies from spending funds in excess of what has been appropriated by Congress, or from accepting voluntary services except under an emergency. In practice, this means that the process of donating to the federal government is severed from questions of how federal funds are allocated and employed, so that no private donation of this kind runs the risk of dictating a federal act.

It's not clear, however, whether use of private funds like this is illegal in South Dakota.

As governor, Noem is commander in chief of the National Guard when it is not called into federal service. And she is not alone in answering the call by Texas Gov. Greg Abbott, R, to send troops to the southern border - as of this writing, six state governors have deployed their forces. But what role did the $1 million offer from the foundation funded by Willis and Reba Johnson, Republican megadonors based in Tennessee, play in Noem's decision? Was it the Johnsons' idea, or was it hers? Linking the deployment directly to the donor's offer created the appearance that it was not only paid for but that it was bought at the donor's behest.

Under the Trump administration, the Justice Department opened the door for states to send National Guard troops under gubernatorial control into other states even without receiving that state's permission. Constitution Project scholar Steve Vladeck wrote at the time that this created an "ominous precedent" of pitting red state and blue state troops against each other.

Add private funding to that equation, and it's easy to see how dangerous Noem's precedent could be.

Imagine a scenario, for example, in which wealthy donors pay for the California National Guard to fight wildfires around Malibu while the rest of the state burns. Equally troubling would be the use of a privately funded Guard unit deployed to surround or protect an assembled group that is supported or opposed by a governor and like-minded state leaders.

Money in politics already creates significant corruption concerns. This South Dakota deployment seemingly places decisions about where we use force and why up to the highest bidder.

All this is reminiscent of the days when private American individuals conducted their own foreign policy campaigns by raising private military forces to overthrow governments, a practice known as filibustering. William Walker became the most famous filibuster when he, along with his private army of 60 recruits, landed in Nicaragua. Walker declared himself president and ruled the country for nearly a year, from 1856 to 1857, before being overthrown by a coalition army led by Costa Rican forces. This and several similar efforts were undertaken during the antebellum era to expand slavery.

More than 160 years later, it's concerning to see private interests co-opting genuine military forces to achieve their own policy ends.

Addressing the use of private donors will most likely require legislation. Reforms could include limiting such donations when they are used to send the Guard across state lines, or restricting interstate deployments to a narrower set of emergencies, like natural disasters.

It may also require reconsidering emergency exceptions for private donations, as the definition of the word emergency continues to be politicized and open to future abuse. Any proposals would have to be carefully constructed to not compromise states' rights or undermine the ability of neighboring states to provide assistance and support when real threats to public health and safety exist.

Even if Noem wasn't influenced by her out-of-state megadonor, her decision highlights broader constitutional concerns raised by Abbott's call for state aid at the border. The Constitution assigns Congress the responsibility of naturalization and regulation of commerce between countries. Numerous court cases since the Constitution's ratification have established the federal government's authority over immigration matters, placing border security squarely within the purview of the federal government - not the states.

Mandy Smithberger is the director of the Center for Defense Information at the Project on Government Oversight.