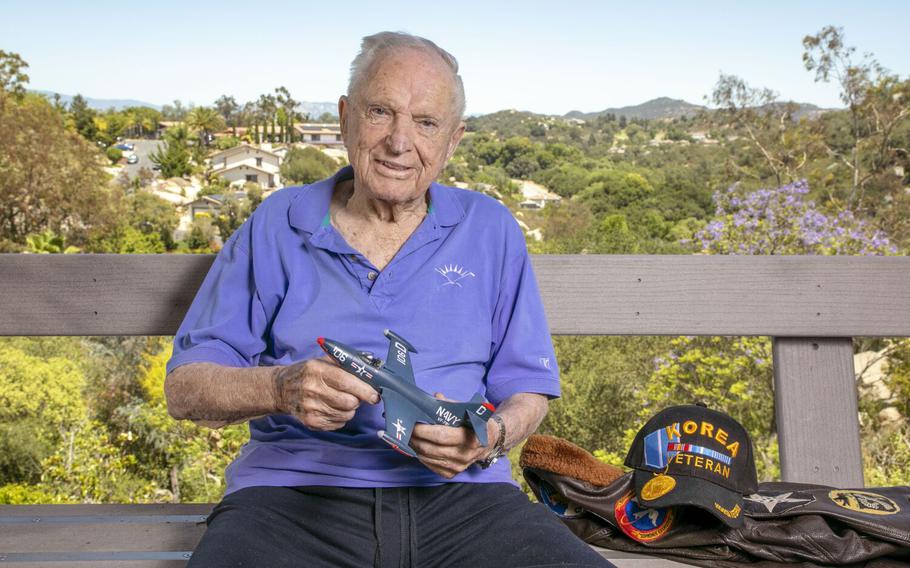 Veteran Royce Williams, 97, sits on his patio overlooking a canyon in the Mountain Meadows area of Escondido, Calif., on June 13, 2022. He’s holding a model of the Navy F9F-5 Panther jet he flew in an aerial dogfight in the Korean War. (Charlie Neuman/For The San Diego Union-Tribune)

(Tribune News Service) — For more than 50 years, Navy pilot Royce Williams couldn’t talk about his epic Korean War dogfight with seven Soviet fighter jets. He’d been sworn to secrecy because of Cold War sensitivities, and all mention of the battle was scrubbed from the official records.

Now the 97-year-old California resident is going to receive the Navy Cross, the second-highest award for combat valor. He said Friday afternoon that he’s pleased to get the recognition.

“My friends have been trying to get this for me for a long time,” he said.

The ceremony is scheduled for Jan. 20 at noon at the San Diego Air & Space Museum in Balboa Park.

“The heroism and valor he demonstrated for 35 harrowing minutes 70 years ago in the skies over the North Pacific and the coast of North Korea saved the lives of his fellow pilots, shipmates, and crew,” U.S. Rep. Darrell Issa said in a statement Friday announcing the ceremony. “His story is one for the ages, but is now being fully told.”

Issa and the other members of San Diego’s congressional delegation have been part of an effort, launched almost a decade ago, to get the Pentagon to acknowledge Williams’ exploits and to upgrade his Silver Star to something more appropriate.

Called “Operation Just Reward,” the campaign has been aimed at bringing Williams the Medal of Honor, the military’s top award. But the Navy Cross is a big step in the right direction, according to Steve Lewandowski, a Navy veteran and former commander of a local American Legion post.

“For the first time, Royce is being officially recognized for that incredible air battle,” Lewandowski said. “That makes him happy. And it doesn’t preclude him from getting the Medal of Honor later.”

The upgrade was approved last month by U.S. Secretary of the Navy Carlos Del Toro.

“Having reviewed the findings of now numerous investigations related to the case of Capt. Royce Williams, I have determined this case to be special and extraordinary,” Del Toro said in a press release dated Dec. 22. “His actions clearly distinguished himself during a high-risk mission and deserve proper recognition.”

On Nov. 18, 1952, Williams was in a F9F-5 Panther jet patrolling the Yalu River, which separated North Korean and Soviet territories. The Soviets weren’t directly involved in the war, but they had planes in the sky, protecting their airspace.

Williams and three other Americans, also in Panthers, encountered seven hostile Soviet MiG-15s. The other U.S. planes were soon scattered by engine trouble and enemy fire, and Williams found himself in the dogfight alone. He shot down at least four of them before escaping to a U.S. aircraft carrier.

“A lot of it was awareness of where they were and how I had to maneuver to avoid them,” he told the Union-Tribune in an interview last year. “They were taking turns. I decided if I concentrated on shooting them down, then I’d become an easy target. So my initial goal was to look for defensive opportunities when they made mistakes.”

When he landed, he counted 263 holes in his plane. He was uninjured.

Worried about drawing the Soviets into the Korean War, U.S. military commanders hushed any public mention of the battle. Williams got pats on the back — and shared a cocktail with President-elect Dwight Eisenhower — but was ordered not to tell anyone, not even his wife.

He served another 23 years in the Navy, including 110 flight missions over Vietnam.

In the early 2000s, U.S. records from the Korean War were declassified, and word of the dogfight spread, especially in military aviation circles.

A 2014 book by a Russian military historian mentions the encounter. It said that seven MiGs left a base in Vladivostik that morning, and only one returned. Four were shot down by a single U.S. aircraft, another was shot up and crashed, and the seventh plane was never found.