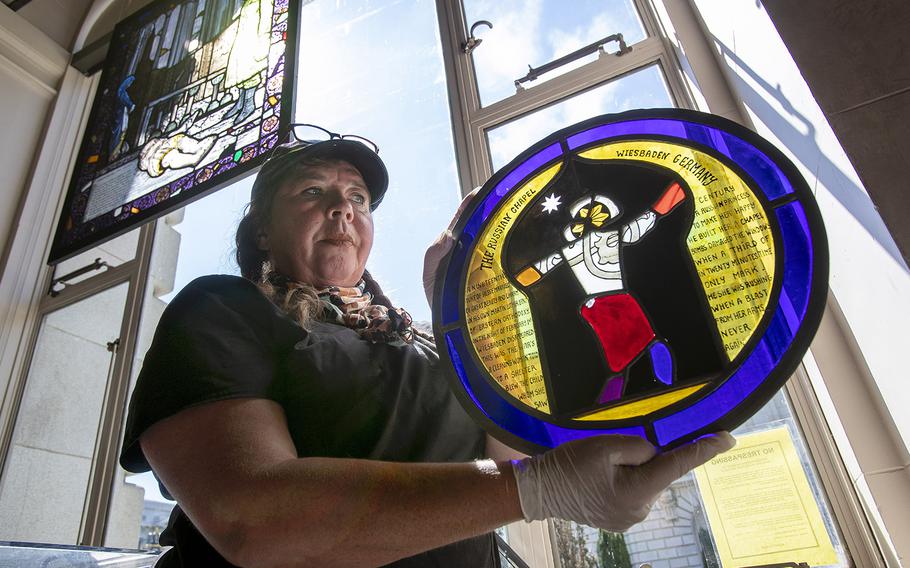 The broken bits, taken from bombed and bullet-riddled churches throughout Europe during World War II, represented more than just shattered dreams and lives. To McDonald, a Seattle native who died in San Francisco in 2002, they were tangible links that fused history to the present, as well as the future.

Now that glass is the showpiece of an exhibit at the War Memorial Veterans Building in San Francisco's Civic Center. "Remembered Light" includes the works of 13 artists who used those fragments, along with McDonald's memories, to fashion new stained glass windows, sculptures and 3-D pieces. At the end of its run — the exhibit will be open Wednesday-Sunday through Nov. 20 — the works are destined for a more permanent installation in the Presidio Chapel.

Armelle Le Roux, a celebrated stained glass artist who has worked with teams restoring stained glass at San Francisco City Hall and managed prominent projects for Grace Cathedral and for New York City's St. Thomas Church, learned of the hidden gems through an acquaintance and was the first artist to realize the potential of McDonald's treasure trove.

She met with McDonald to discuss ways to bring the glass back into the light.

"At the time," Le Roux says, "we talked about creating some sort of memorial piece. But because the glass had been saved as separate pieces, each with a name and history, everything had meaning, and I didn't want to lose that."

Le Roux began creating two stained glass pieces that incorporated two sets of shards, working them into designs based on their provenance and McDonald's recollections. Eventually, she brought in other artists to create additional pieces.

Ariana Makau, an Oakland-based glass artist and conservator and founder of Nzilani Glass, says she was immediately struck by the project.

"It intrigued me on multiple levels," Makau says. "It was like traveling through space and time, the way each piece of glass had been documented. That he had the foresight to do that appealed to me as a conservator."

McDonald, an Episcopal minister, traveled to Germany in the early 1930s and witnessed the rise of Adolph Hitler, a man he first admired but came to despise. When war broke out, McDonald enlisted as a chaplain in the U.S. Army, assigned first to San Francisco's Fort Mason and later to the 12th Army, under the command of the legendary Gen. Omar Bradley. He soon found himself following the advancing troops through England, France, Belgium and, finally, Germany.

McDonald was tasked, says his great-nephew, San Francisco restaurateur Bruce McDonald, with finding suitable churches to hold services for all the non-Catholic soldiers. His travels included several places he'd visited during peace time, where he began picking up the broken remnants of stained glass windows.

"He was quite a packrat throughout his life," Bruce says. "He collected menus from restaurants around the world. He loved to save things and always said that sometimes, it's a small thing that brings back a memory.

As McDonald gathered the shards, he tucked them in envelopes and mailed them home to his mother. By war's end, he had mailed 25 envelopes and collected more than just glass. He had documented the coordinates and the city where each piece was found and his observations of what remained after the battles. About one, he wrote:

"On or about Oct. 23rd, I entered the first German city to fall to our forces, the imperial but now roofless city of Aachen, a good thousand years old. A very new Church of the Holy Ghost on the outskirts had been the scene of a firefight and a wrecked tram stood by the forlorn and empty church. Down by the Cathedral, I saw an aged woman lugging two suitcases as she crawled over stone piling. Where was she going with her pitiful burden?"

About another, he wrote:

"This church, obliterated during the Battle of Britain in August 1940, was a favorite of high church Episcopalians from the Pacific Northwest. In 1933, I had worshipped there many times, a special wrench to find this favorite 'Fortress of the Faith' gone."

"I had just arrived in Normandy. There was an apple orchard where our Army headquarters was tented. In the evening, I walked into the flattened town spread out around a badly bombed church. A ghostly silence covered the deserted area except for the shoveling noise of a lone man trying to uncover his house. He saw me and glared. I represented the war, which had brought ruin to his house and home.

"I picked up some of the church glass and moved on."

The shards might have remained hidden, their stories lost to time, if not for a chance meeting. McDonald, who continued to travel the world for many years after the war, had finally settled in San Francisco, a city he admired for its boldness and verve. After serving a congregation at St. Luke's Episcopal Church, he had eased into retirement when one day he struck up a far-reaching conversation with a fellow resident at his retirement home. The topic turned to stained glass, and McDonald mentioned his unique collection. The woman knew of Le Roux's work and reached out to her.

The Remembered Light works were completed in 2007 and put on display, first in the Presidio, before eventually making it to New Orleans' World War II Museum, where COVID held it captive for a year. Finding a place to exhibit was sometimes difficult, Bruce McDonald says, because some museums shy away from religious exhibitions. But Remembered Light is not about religion, he says. It's about one man's journey through war. McDonald wants people to learn and see the connections between war and peace, as the exhibit returns home to San Francisco.

"Fred was a very articulate and educated worldly person," Le Roux says. "At the end, I want people to have a sense of the humanity, not just of religion and war. I want them to think about the impact of destruction. I'm sure people will feel the sorrow, but I want them to also feel hope."