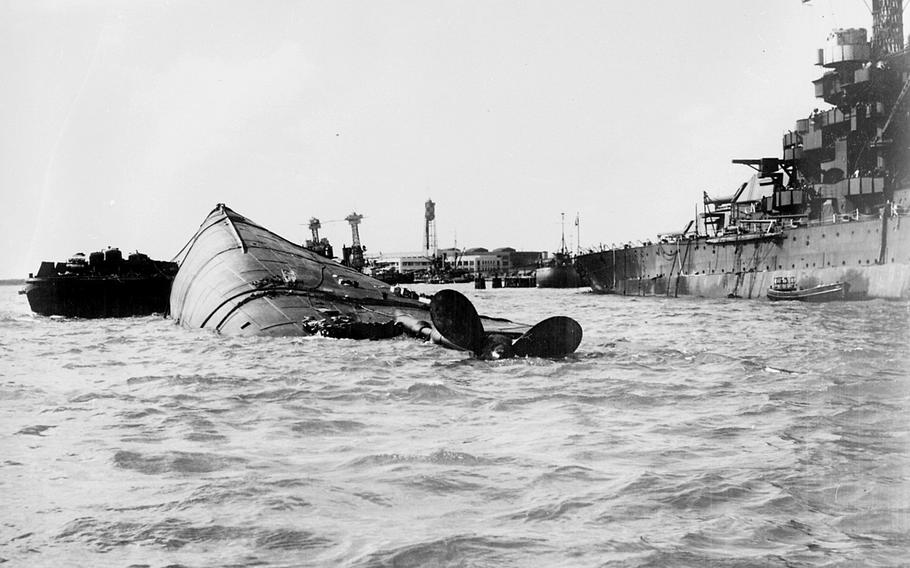 But finally, in May, the Sioux City native, killed on board the battleship USS Oklahoma during the Japanese attack on Pearl Harbor, will be returned home, buried next to his parents in Memorial Park Cemetery.

“It brings closure to the family. It’s really just hard to express in words,” his nephew, Mark Nichols said. “Seeing him put to rest with his parents means the world.”

Storekeeper 3rd Class Harry E. Nichols was among the 429 USS Oklahoma crewmen killed in the attack, in which the battleship took multiple hits from Japanese torpedoes and capsized quickly, trapping dozens of men below deck.

His parents rarely spoke about their loss after the war, Mark Nichols said, and neither did his father, Norman, who was a year older than Harry.

“He did say there wasn’t a day that went by that he didn’t think of his brother,” Mark Nichols said in a telephone interview from his Melbourne, Florida, home.

Harry Nichols was the second of Ernest and Florence Nichols’ three children. Norman served in the Army during World War II, returned to Sioux City after the war and moved to California in 1973. Youngest child Betty moved to Arizona sometime later. Both died before seeing their brother’s remains identified and returned home.

Harry Nichols enlisted in the Navy in January 1941 and was assigned to the USS Oklahoma at the time of the Dec. 7, 1941, attack. In the days after the attack, victims whose identities were both known and unknown were buried in Honolulu. Remains recovered in 1943 after the ship was righted were buried in mass graves in Honolulu’s National Memorial Cemetery of the Pacific, also known as the Punchbowl.

As of 2003, 394 of the crewmen remained unidentified when efforts were launched to use modern technology to identify the unknowns. In 2015, 388 crewmen remained unidentified, and their remains were unearthed and sent to the Defense POW/MIA Accounting Agency lab at Offutt Air Force base in Omaha, where a team of anthropologists identified 355 of them before the project ended last summer with just 33 who could not be identified individually.

Mark Nichols submitted a DNA sample to the Navy in 2018. The following spring, he was informed his uncle’s remains had been identified.

“I was excited as well as just kind of shocked,” said Nichols, who grew up in the Sioux City area and graduated from South Sioux City High School in 1970.

Harry Nichols’ remains were identified May 30, 2019. A military service and burial were planned for March 2020, but COVID shut down those plans. Mark Nichols said Navy officers met last week with him and his sister, Nancy Eischeid, a Bishop Heelan graduate, at her home in Cleveland, Tennessee, to resume burial planning. Harry Nichols could have been buried at Pearl Harbor or Arlington National Cemetery in Virginia, but the family decided he belonged in Sioux City.

“I just thought the proper place would be with his parents,” said Mark Nichols, who served four years in the Air Force after enlisting in the fall of 1970.

Nichols, 70, said his father’s ashes will be buried alongside Harry and their parents, too. As a veteran himself, Nichols said having his father and uncle together again means a lot to him.

“I know my dad and Harry sacrificed a lot,” he said.