A widow on her husband, wounded in WWII, who welcomed every morning

(Tribune News Service) — Mollie Horvatis came of age with the Great Depression and World War II, her sensibilities shaped in those hard years. Yet the era when every adult American shared some element of that experience is long gone, and many of her peers in their 90s now carry firsthand memories of that time, alone.

It leaves her grateful — the primary quality in her life — for a brother and sister with a view of the same landscape.

Mollie, now of Clarence, is 94. Her brother, Joe Kirisits, is 96, while their younger sister Carol is 90. When Mollie is stumped about some name or question from the past, such as when I asked where and when her late husband first asked her for a date, she can always pick up the phone for insight from her big brother.

“Mostly,” Kirisits told me of those conversations, “we talk about the war years.”

What they saw and lived is the entire point of a special Fourth of July section in The Buffalo News, built around firsthand testaments to that era. Mollie, a great-grandmother, has a close-to-home appreciation of a truth that even now can seem staggering to those of us raised in the decades just after World War II — the graying children of parents shaped by a war that changed the global landscape.

Today, the number of living American veterans of that conflict is estimated at somewhere above 100,000, less than 1% of the 16 million whose presence was once felt in every aspect of life in this country.

Both at home and abroad, it was a time that ignited staggering transformation, and living witnesses become increasingly precious. Mollie has had plenty of time to reflect in the past year and a half, so much of it in solitude because of the pandemic. Her five children and her grandchildren would sometimes visit in small groups, safely distanced while they sat on lawn chairs in the driveway, which is how they spent the last Fourth of July.

For the most part, Mollie read, crocheted or simply remembered. “I never mind being alone,” she said of many hours spent remembering her late husband Joe, “a great guy, a very gentle guy, with an infectious laugh.”

When she comes up with a question — such as the one about a first date — she will often call her brother, who resides in an assisted living unit at the Brothers of Mercy campus in Clarence.

The best guess from Joe Kirisits: His sister and his buddy — who shared his first name — struck up their lifetime romance at the old Eddie Ahl’s tavern and restaurant, a favorite 1940s hangout on Broadway.

The two men, so close to Mollie, were lifetime friends. They all grew up within a little community of Austrian immigrants, centered around Monroe and Sycamore streets. Mollie was a kid sister when her brother and husband-to-be were close as baseball-loving boys. They were buddies who loved playing ball or showing up for Buffalo Bisons games at the old Offermann Stadium, not so long before they left for the service as teenagers after the Japanese attack on Pearl Harbor.

Kirisits was in the Navy. Joe Horvatis was a soldier who landed in Normandy during the early days of the American invasion. He was hit in the arm by German shrapnel in France, a wound of enough severity that “today they would have sent him home,” Kirisits said.

Instead, his friend spent three months in a hospital in England, and then — patched up — went back to the front lines.

In Germany, he was crawling toward a pillbox at Monschau when a land mine “blew him 10 feet into the air,” Kirisits recalls. Chaplains twice gave him what he described to his wife as the last rites. His own buddies doubted he would survive. The blast tore apart his hip. He nearly lost his leg.

For the rest of Joe’s life, he was aware that if he had been in a different position by a half-inch or less, he might have died on the battlefield.

Her husband never said much about the war, at a time when so many shared his understanding: Survival equated to sheer chance, to utter humility. He was sent to a military hospital on Long Island, and during brief visits to Buffalo — by then he was using crutches, with one leg healing and shorter than the other — he and Joe Kirisits would go out to their favorite “gin mills,” joined by friends.

That included his buddy’s kid sister, Mollie. She began dating her husband-to-be on those short trips home. She would wait at Buffalo’s Central Terminal, which retains a kind of spiritual power for her generation, to greet him when he arrived and say farewell when he left — partings that were so emotional his worried mother could not bring herself to go.

Mollie wed Joe Horvatis in 1949, a marriage that endured until her husband died in 2007 of complications linked to Alzheimer’s disease. Just after the war, despite wounds that never fully healed, he was determined to build a career. He started at the old VA hospital and then went to the Internal Revenue Service, where he eventually became chief of taxpayer assistance in Buffalo.

“He had pain, he always had pain, but he was still happy,” Mollie said. She recalls how Joe Horvatis always found particular joy in Christmas, which she believes was intertwined with enduring thanks for coming home at all. Joe Kiristis, her husband’s close friend, said at least six or seven young men from their neighborhood died while overseas, absence that always stayed with those who made it back. Mollie saw it in full when the couple did some traveling to France and Germany, on what Joe Horvatis saw as a quiet mission:

He wanted to find the military graves of both a childhood friend and of a lieutenant he recalled with reverence. Horvatis and his wife eventually stood by those white crosses, “where there was no noise, just the birds, and he had tears,” Mollie said. They also traveled to Monschau, the place where her husband, so long ago, touched off the land mine.

On that journey, he told her as much as he ever said about it, and she wishes someone could have recorded him as he spoke. What was evident was his constant awareness of the friends, lost in combat, who shaped how he saw the world when he rolled from bed each morning.

“It really was amazing,” Mollie said. “You think of how he came so close, and then how we were married for all those years.”

Her husband grew up in the Depression years, a time “when we had nothing,” Mollie said, “and where you never missed what you didn’t have.” In the war, he was wounded twice and finally sent home in pain, during an era when other passengers at the Central Terminal — seeing this young man in uniform, balanced on his crutches — would rise to help him as he left the train.

Mollie and Joe Horvatis were a couple for more than 60 years, and like anyone else had their triumphs and their heartaches. But if there is one simple quality Mollie sees as almost universal to this generation now slipping away, it is an understanding that the greatest of treasures on this Fourth of July — all these children, grandchildren and great-grandchildren she has lived to see — exist only because her husband was precisely where he was, by the slightest margin, when a land mine went off.

“He was still happy,” she said of Joe Horvatis. “He was always happy to be alive.” 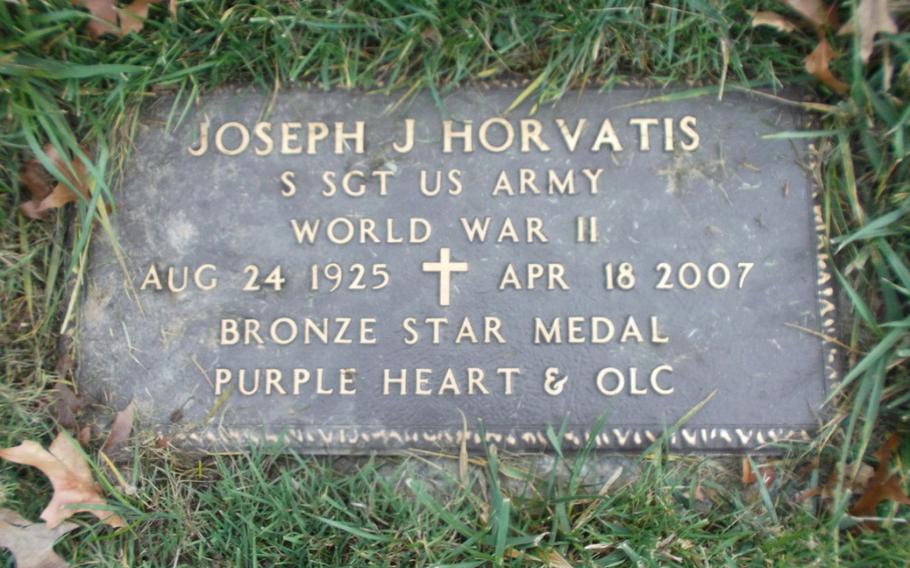