Tokyo official: No evidence that US military caused groundwater contamination near Yokota 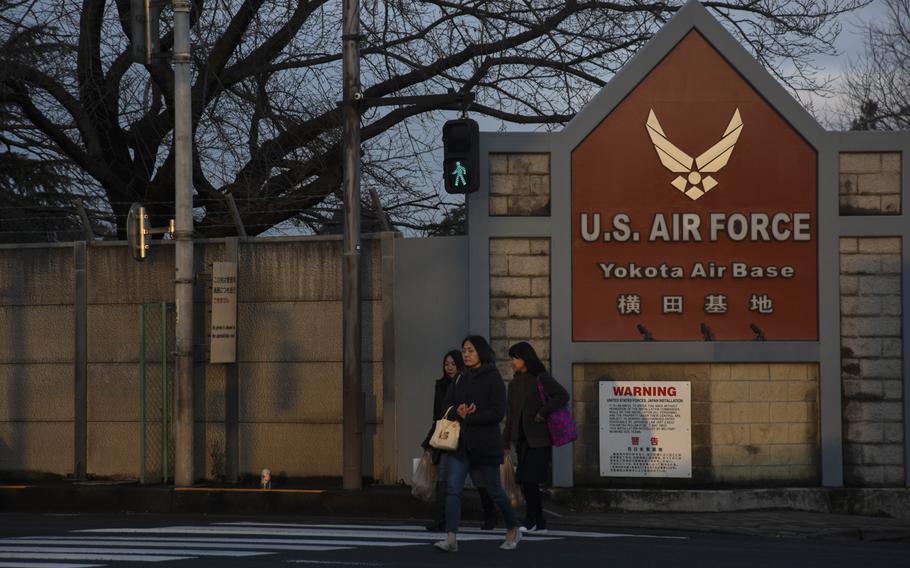 YOKOTA AIR BASE, Japan — Contaminated groundwater has been detected near the home of U.S. Forces Japan in western Tokyo, but officials found no evidence the pollutants came from inside the base, a Tokyo Metropolitan Government official said Wednesday.

Perfluorooctane sulfonate (PFOS) and perfluorooctanoic acid (PFOA) — synthetic chemicals found in firefighting foam and other products — were detected in two wells near the base during a survey from December 2018 to January 2019, said Aya Kono, an official with the Tokyo Metropolitan Government’s Bureau of Social Welfare and Public Health.

The contamination was about 19 times the level set by a U.S. drinking water health advisory, the Asahi newspaper reported Monday. The U.S. Environmental Protection Agency recommends limiting the combined presence of PFOS and PFOA in water to 70 parts per trillion, according to a factsheet on the agency’s website.

Surveyors checked water for PFOS and PFOA at 61 sites in western Tokyo, including spots near Yokota in the cities of Fussa, Tachikawa, Akishima and Musashimurayama, after reports that firefighting foam had leaked on the base between 2010 and 2017, Kono said.

However, she said determining the origin of the pollution is difficult since those compounds are widely used and underground water flows are complex.

The wells where the chemicals were detected do not supply drinking water, she added.

“We couldn’t draw a conclusion that it was or was not caused by Yokota Air Base,” Kono said, noting that pollution was also detected in six other places that were not close to the base.

Tokyo officials hope to receive more details from the base to be able to determine the pollution source, said the metropolitan government’s director of military facilities relations, Jun Sakurai.

The chemicals found in the wells have been used for years in a variety of products such as carpets, clothing and paper packaging for food and cookware to make them oil and water repellent, she added.

“U.S. Forces rigorously manage the stored firefighting foam within U.S. facilities and areas, including Yokota Air Base,” she said.

U.S. officials on Okinawa reported “minimal to no impact” on the environment from the release of firefighting foam at Marine Corps Air Station Futenma when auxiliary power in an aircraft hangar was inadvertently switched on Dec. 5.