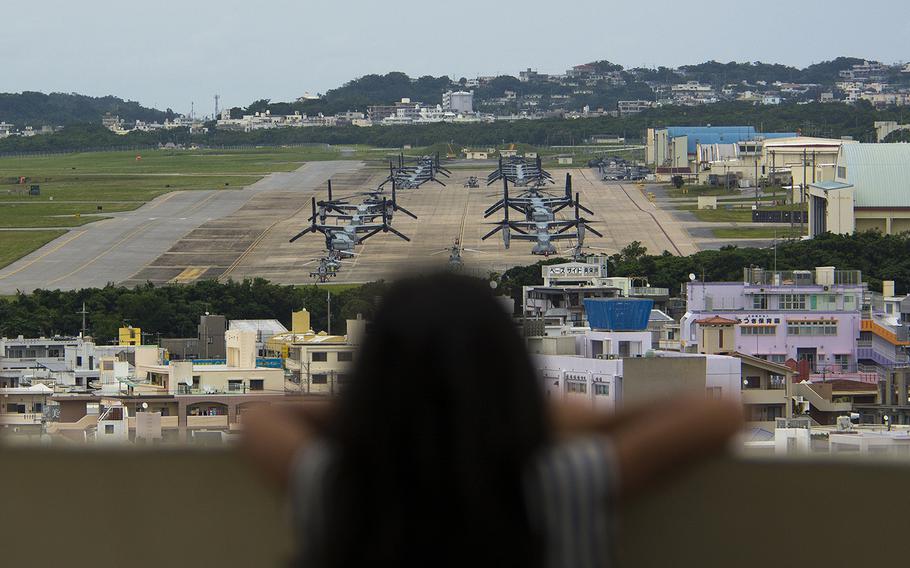 CAMP FOSTER, Okinawa — The inadvertent release of a banned pollutant in firefighting foam at Marine Corps Air Station Futenma created “minimal to no impact” on the environment, Marine officials said this week.

The incident occurred Dec. 5 when an auxiliary power unit in an aircraft hangar was inadvertently switched on, activating a fire suppression system, Marine Corps Installations Pacific spokesman 1st Lt. Tim Hayes wrote Wednesday in an email to Stars and Stripes. The system released an unknown amount of firefighting foam.

No injuries or property damage were reported.

“Approximately 99 percent of the … firefighting foam, and contaminated water has been contained and cleaned up,” Hayes said in the statement.

“The environmental team on site has determined that the environmental impact to the area is minimal to no impact, and there is no safety concern to the public” he said. “Proper procedures to prevent recurrence has been briefed to all military and civilian personnel regarding the use of the auxiliary power unit and other equipment in confined spaces.”

Japan has no guidelines on safe levels of either chemical, but health advisories in the United States are issued for drinking water at levels of 0.07 micrograms per liter and above. Their manufacture and importation have been prohibited in Japan since 2010.

The chemicals are still in use in firefighting foam on U.S. military installations in Okinawa, but are being phased out, U.S. military officials have said.

The Okinawa Defense Bureau, which represents the defense ministry, said it was waiting for further details on the incident.

“Marine officials informed us that they cleaned the majority of the firefighting chemical foam from the facility and they did not see anything that spilled or leaked off base,” a bureau spokesman said Wednesday. “Marine officials said there is no concerns for the environment and they will retrain their people so that this won’t happen again.”